Market timing – as tricky as ever

The recent market volatility surrounding Brexit had the potential to rattle investors’ nerves. The day after the referendum (Friday June 24), markets around the world reacted strongly: the Russell 1000® Index was down -3.6% for the day and down another -1.9% on Monday June 27. Many investors were tempted to pull their money out of the market until the situation settled down again. Here’s the thing: It’s hard to correctly time the exit at the top and the re-entry at the bottom of the market. Oftentimes, reversals are quick and unpredictable and the market has picked up steam again by the time nervous investors feel confident that everything has settled and it’s an appropriate time to re-enter. These mistimings can have a significant impact on portfolio returns. As the chart below shows, an investor who missed the past decade’s 10 best market return days would have given up half the portfolio return they could have earned if they had been invested for the entire 10-year period. 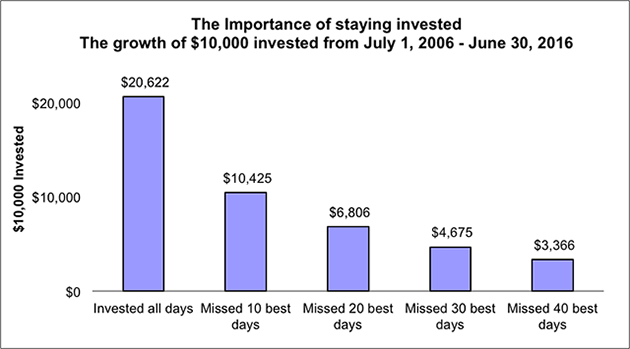 Source: Russell 1000® Index. Indexes are unmanaged and cannot be invested in directly. Returns represent past performance, are not a guarantee of future performance, and are not indicative of any specific investment. This hypothetical example is for illustration only and is not intended to reflect the return of any actual investment. Investments do not typically grow at an even rate of return and may experience negative growth. Of course, the reverse is also true. Missing even just one of the decade’s 10 worst performing days would have helped boost portfolio returns; that portfolio would be worth more than double ($43,354 instead of $20,622) that of a portfolio that had been ‘invested all days.’ If we extend the number of ‘missed days’ to 20, 30, even 40, the difference is striking: Time those exits and entries correctly and you’d be a rock star! In the case of the market’s short-term reaction to Brexit, within a week, stock markets had settled down again (at least temporarily), with the five post-Brexit result trading days ending at just -0.7% -- a marked improvement from where they stood just days earlier. Although Friday, June 24 may have felt like one of the worst market return days in the last decade, it didn’t even register among the top 10, 20, or 30 worst market days. In contrast, August 24, 2015 was one of the markets 30 ‘worst’ days in the past decade. The market experienced a sell-off of -4% that day in reaction to weak Chinese economic data. That rattled a lot of nerves. But just two days later, the market experienced one of its 30 best days on August 26, 2015, when the Russell 1000 Index was up over 3.7%. This pattern of quick reversals between best and worst days has been repeated frequently over the past 10 years. Correctly timing when to get out of – and back into – the market is tricky. Get out right after a ‘worst’ day, and one might not get back in soon enough to catch a ‘best’ day.

Short-term volatility can be nerve-wracking. But, trying to avoid being invested on the bad days and catching only the good days requires making two decisions correctly: 1) knowing when to get out of the market, and 2) knowing when to get back in to the market. They’re both difficult calls to make. Rather than reacting to volatility and trying to time short-term market gyrations, a well-thought out ‘stay invested’ investment plan may prove more successful in achieving long-term outcomes.