Markets in perspective – February 2016 in review 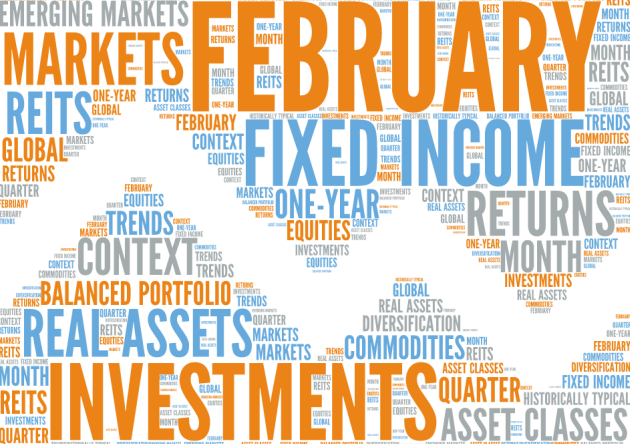 Following is the Russell Investments Chief Investment Officers’ views of the key themes affecting market performance in February 2016. All data is as of February 29, 2016. Sources and indexes used to represent asset classes can be found in the disclosures at the end of this post.

1.     Intra-month volatility February started with markets selling off on the back of increased recession risk in the U.S. As the month progressed, this risk aversion abated, and many of the losses in riskier parts of the market rebounded strongly. This was evidenced by U.S. small cap stocks, which started the month down and then rallied mid-month to end February flat. Dynamic stocks ended the month trailing the broader U.S. equity market slightly as the rebound was not sufficient to offset losses at the beginning of the month. 2.     Central banks keep talking Inaction across U.S. and European central banks affected various equity market sectors. Central bank “chatter” acutely impacted banks and diversified financials as anticipated rate increases seemed less likely. Traditionally interest rate sensitive sectors, such as utilities and Real Estate Investment Trusts (REITs), were less affected. The weaker U.S. dollar seemed to indicate that the U.S. economy was in a precarious state with the possibility that the Fed’s increase in rates may have been premature, given the increased possibility of recession. 3.     Canada and Japan surprise performance Japan’s surprising adoption of the Bank of Japan’s (BoJ) negative interest rate policy (NIRP) failed to produce the expected outcome. Japan ended February as the worst performer with weak equity markets, which were down 3% (in USD), as well as strong appreciation in the yen contrary to expectations. Canada was the best performing market in February (up 4% in USD). This was led by materials and gold-related stocks, which appear to have shaken off recent sluggishness.

1.     Central banks keep talking In February, bond yields were lower globally as central bankers adopted a more cautious tone. The 10-year U.S. Treasury yield was lower as the Fed continued to assess impacts of recent market volatility. Buying trends suggested a flight to safety as macro risks (e.g. China growth, low oil) continued to loom. 2.     Credit continued to struggle Over the month, there were mounting concerns over bank issuers as investors worried about loan losses in the energy sector and pressures on their margin given the lingering low interest rate environment. There were some downgrades in this sector. This came after Moody’s reviewed ratings of energy and mining sectors issuers following a reduction in their commodity price expectations. 3.     Mixed currency activity The USD depreciated in February while the Japanese yen saw strong appreciation following the Bank of Japan’s surprise negative interest rate decision at the end of January. In Europe, “Brexit” news drove depreciation in the British pound.

1.     Intra-month volatility Sharp reversals across asset classes (e.g. equities, high yield corporate spreads, energy, rates and currencies) negatively affected many hedge funds. This is not quite a “risk-on” market for REITs as total return performance flattened out, and defensives staged a partial reversal of trends seen earlier in the year. The listed infrastructure sector continued to outperform global equities, continuing to display defensive equity characteristics in a shaky global growth environment with negative to lukewarm equity market sentiment. 2.     Central banks keep talking Central bank activity remained highly influential in REITs. For example, Japanese REITs posted exceptionally strong performance with support from negative interest rates, direct security purchases, and yen appreciation. In listed infrastructure, higher-yield, rate-sensitive sectors tended to outperform, as rates on the 10-year U.S. Treasury continued their decline. 3.     Commodities supply/demand imbalance remains The Bloomberg Commodity Index was down -1.6% with energy as the worst performing sector (down over -9% for the month). This is due to low seasonal demand and ample inventories. The agriculture sector also fell (-2.8%) during the month as supplies for grains commodities remained high. Precious metals and industrial metals rose amid continued turbulence in equity markets. However, there are signs of improved fundamentals in the base metal markets.

With every single asset class except Emerging Markets Debt and U.S. Bonds in negative territory for the 12 months ending February 2016 and half of them falling below their historical typical range, investors could be forgiven for feeling nostalgic for better times - like when the Asset Class Dashboard was heavily weighted toward positive side of the ledger in December 2013. In those cases, it may help to remind clients that prices and returns historically move back toward the average in the long-term, so the current state is not necessarily a new normal.