Markets in perspective – June 2016 in review

The following is the Russell Investments Chief Investment Officers’ views of themes affecting market performance in June 2016. All data is as of June 30, 2016. Sources and indexes used to represent asset classes can be found in the disclosures at the end of this post. 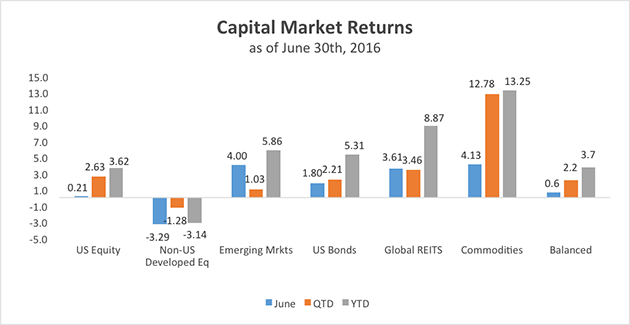 Global GDP growth is sluggish and corporate profits have weakened. Business cycle fundamentals in the developed markets have softened, but the absence of major imbalances in the U.S. economy suggests a low risk of a recession.

Europe has entered uncharted waters with the surprise vote by the United Kingdom (UK) in favor of Brexit. This has elevated uncertainty, which adds risk to the global economic outlook: UK, Europe, Japan, emerging markets, and the U.S. The UK economy’s downside risks from Brexit are meaningful. We expect the Bank of England (BOE) to cut rates preemptively to buffer growth. Meanwhile, the Bank of Japan (BOJ) is likely to enhance its own stimulus program, but for different reasons. Yen appreciation has cast a shadow on the earnings outlook for Japanese businesses and will make it harder for the central bank to meet its inflation target.

Global bond yields dropped to new lows as safe haven assets were strongly bid and central banks from around the world responded to this uncertainty with “verbal” easing.

Markets experienced increased volatility stemming from the Fed’s decisions in early June and the potential political and geopolitical risks from Spain, China, Russia, and Italy, and the UK (due to Brexit vote). Brexit dominated headlines late in the quarter and caused significant drawdowns with global equity markets down 5% to 10% in the days following the vote. Surprisingly, much of the losses were recovered by quarter-end, with the Russell Global Index finishing second quarter with a positive 1% return.

2. Europe ex-UK is under the microscope

European local market equities ended the quarter down 0.64%, underperforming the U.S. (2.54%) and broader global equities (1.25%). This was primarily in response to Brexit. Most multi-asset portfolios remain overweight with Europe, Middle East and Africa excluding UK (EMEA ex-UK) equities as they are still at attractive valuations. However, we are watchful for negative impacts on earnings and sentiment, and any political or monetary support to prevent further potential contagion.

During the second quarter, asset classes, such as high yield, listed infrastructure, emerging market debt and commodities, held up more effectively than global equities. Commodities was the strongest performer, returning 13.8%. We are currently neutral to slightly overweight in these diversifying exposures across most multi-asset portfolios as this has been helpful to performance.

Low volatility or low beta stocks outperformed across markets in a risk-off reaction. With the Fed taking a wait-and-see attitude towards further rate increases, dividend stocks performed well as investors paid up for yield. Stocks of companies with higher quality balance sheets and higher returns on capital were penalized relative to stocks of companies with high debt levels and poor return on capital. Companies with higher debt burdens benefited from the lack of Fed action as interest payments remain lower, longer. In the U.S., small cap stocks were generally rewarded.

During the first half of the year, energy was a leading sector due to a rebound in oil and natural gas prices and better economic news from China as it shored up its financial system. The weak May U.S. employment report and the UK June Brexit vote lowered investors’ expectations of interest rates and economic growth. This benefitted more traditional non-cyclical sectors, such as consumer staples, utilities, and health care.

In U.S. dollar terms, U.S., Canadian and Japanese equities had the strongest performance. Meanwhile, European and UK stocks were down even in local currency terms for the quarter. This was driven mainly by currency fluctuations, most notably the Japanese yen strengthening almost 9% and the British pound depreciating around 7% against the U.S. dollar for the quarter. Although the June 23 Brexit result came as a surprise, the FTSE 100 Index ended up 2.6% for the week (ending June 30) after falling almost 8% intraday on June 24. Bleak economic data in Japan and Europe and a continued strengthening of Japanese yen drove Japan and Europe ex-UK markets down for the quarter.

During second quarter, rates fell globally due to sluggish U.S. earnings, slow U.S. employment growth, and the Brexit vote. These signs of slowdown fueled expectations of further easing from central banks, and further delayed for rate hikes in the U.S.

Partial recovery in oil prices spurred a rally among beaten-up energy issuers and drove outperformance in the high yield sector. Emerging market bonds performed strongly, particularly those denominated in U.S. dollars, as expectations of rate hikes were pushed out to later in the year.

Broadly, European currencies (particularly the British pound) sold off after the Brexit vote. U.S. dollar and Japanese yen benefitted from the uncertainty surrounding the referendum vote.

Immediately following Brexit vote, real estate investment trusts (REITs) had a brief negative performance. However, the defensive environment before and after the referendum vote resulted in REITs outperforming other equity sectors.

U.S. 10-year Treasury yield fell over 30 basis points to below 1.5%. We saw negative long-term government bond yields in Europe and Japan. Higher-yielding REITs and the utilities sector of listed infrastructure had strong performance. A “lower-for-longer” interest rate environment is likely to be favorable for total returns in infrastructure compared to broader markets.

For the second quarter, commodity markets were up around 13% and energy was the strongest sector (up over 20%). This rally was a result of strong demand and tightening supplies. With this tailwind, the energy infrastructure sector was up over 15% for the quarter. Meanwhile, the precious metals sector was up over 10% with gold and silver rising sharply at quarter end as the Brexit vote led to a rush into safe haven assets. The agriculture and industrial metals sectors also advanced during the second quarter, up over 12% and 6% respectively.

The latest reading of the Asset Class Dashboard shows that a number of asset classes have made up ground in the past 12 months ending June 30, 2016. Chief among the “greatest improvers” are emerging market equities, infrastructure, global real estate, and emerging market debt. Commodities, high yield bonds and U.S. bonds also deserve honorable mentions in the “much improved” category. One-year performance of U.S. Large Cap defensive equity, global real estate and emerging market debt even crept up above their respective historical averages. All asset classes, except for cash, fell within their respective historically typical ranges. 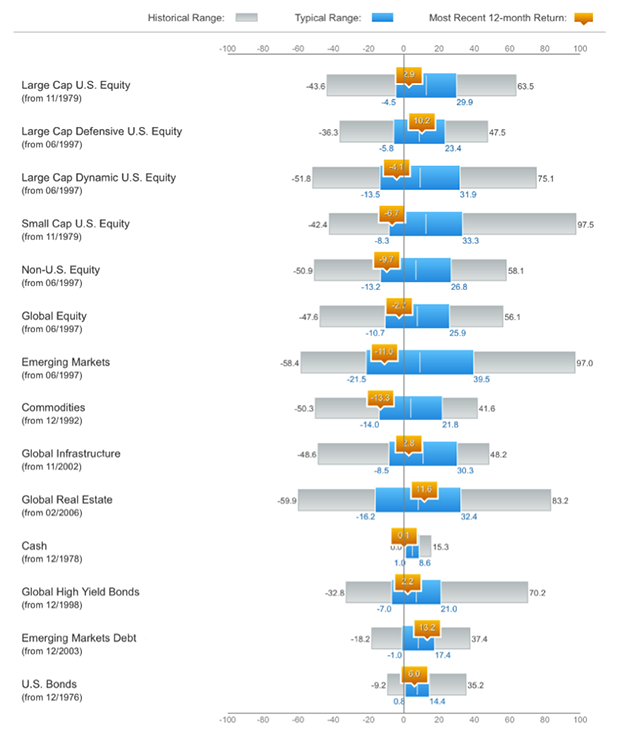 How do I read this chart?

This dashboard is intended as a tool to set context and perspective when evaluating the current state of a sample of asset classes.

The ranges of 12 month returns for each asset class are calculated from its underlying monthly index returns. The stated inception date is the first full month of an index’s history available for the dashboard calculation.

Here is how to read the graphic on this page:

FOR EACH INDICATOR, THE HORIZONTAL BAR SHOWS FOUR THINGS

A GRAY BAR shows the full range of historical rolling 12-month returns for a sample of asset classes.

A BLUE COLOR BAND represents the typical range (one standard deviation away from the mean, i.e. 68% of historical observations) of rolling 12-month returns for these asset classes.

AN ORANGE MARKER represents the most recent 12-month return of the asset classes.