Markets in perspective – May 2016 in review

The following is the Russell Investments Chief Investment Officers’ views of themes affecting market performance in March 2016. All data is as of May 31, 2016. Sources and indexes used to represent asset classes can be found in the disclosures at the end of this post. 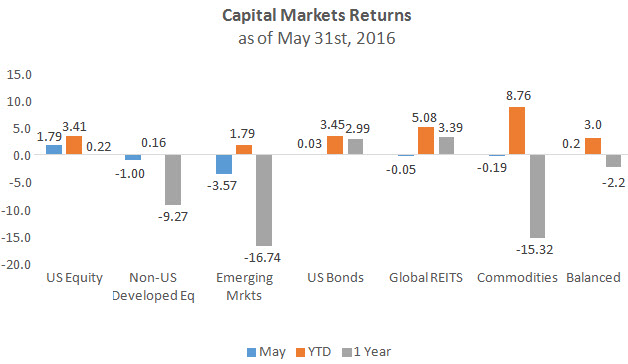 1. Global economy chugs along After a weak start to the year, the U.S. economy appears on track for a modest rebound. The European recovery continued. Oil demand was stronger than expected and, thus, pushed crude prices up to $49 per barrel by month end. 2. Weak earnings The first quarter earnings season was weak globally with S&P 500® companies, for example, reporting an 8% decline in profits. While a significant portion of this earnings soft patch can be attributed to earlier moves in energy prices and the dollar, it has acted as a headwind on global equities, which were effectively flat for the month. 3. Fed talks of tightening; markets listen (kind of) Details from the Fed’s April meeting showed the Committee thinking seriously about raising rates in June. U.S. ten-year Treasury yields did not move much on the news, but shorter-term rates did, with the market putting the chance of a summer rate hike at greater than 50% by the end of May. The U.S. dollar rose, but remained within its recent range.

1. Cyclical and currency trends reverse The cyclical trend that started in mid-February reversed in May as the commodity rich regions of Canada, Australia and emerging markets underperformed the U.S. In USD terms, Europe and Japan modestly underperformed the U.S. A higher expectation of rate hikes, rekindled fears of emerging market debt and global growth concerns caused USD appreciation. In local currency terms, Japan, Australia and Europe ex-UK outperformed U.S. large cap as it was the depreciation of Japanese yen, Australian dollar and Euro against the USD for the month that drove these regions to underperform in USD terms. The UK markets and pound were stable despite the looming “Brexit” vote in June. 2. Equity markets reflect increased probability of Fed rate hike With Fed talks of tightening, investor risk appetite declined. This resulted in defensive outperforming dynamic; growth outperforming value. Factor payoffs were relatively muted in May.  Meanwhile, higher quality companies and lower volatility stocks, particularly those with lower leverage, were rewarded. 3. Technology takes over leadership from commodity sectors May saw continued uncertainty and anxiety help shift investors’ preferences back toward stocks, particularly technology, with long-term momentum. This happened as investors questioned whether the energy and materials sectors had risen too far too quickly and so booked some recent gains.

If, in looking at the May 2016 update of the Asset Class Dashboard, you thought it looked awfully similar to the April 2016 edition, you’d be forgiven. There is very little difference between the 1-year performance of markets in April and May of this year.  In May, half of the asset classes had positive 12-month returns, with differences – on the upside – for real assets (Commodities, Infrastructure and Global Real Estate). 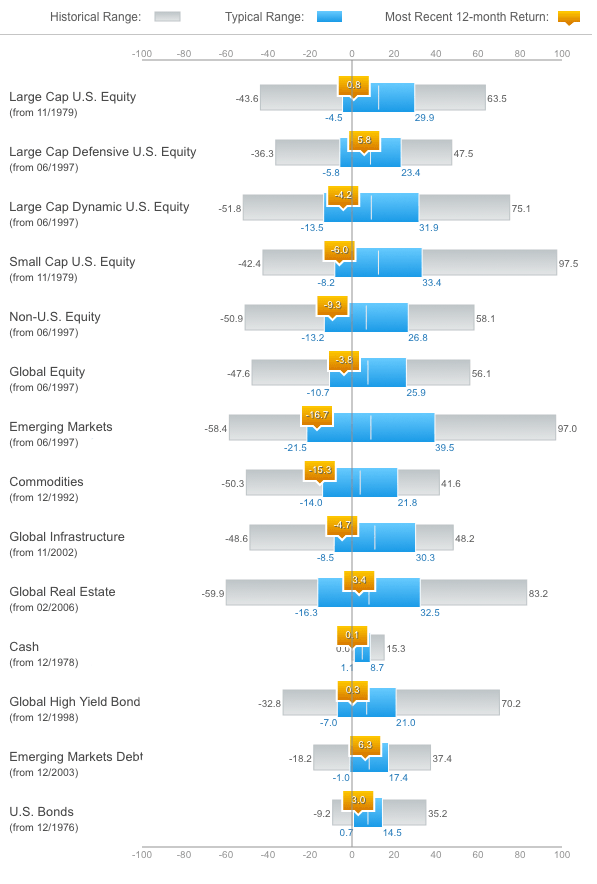