Markets in perspective – October 2016 in review 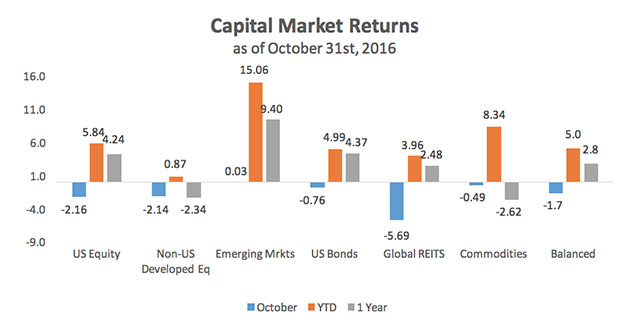 With Q3 earnings season still underway, early results have been encouraging. S&P 500® Index net income is up 3% after five consecutive quarters of negative growth. European earnings ex-financials are even stronger and profit margins are on an upward trajectory in that region. The Fed continued to guide the market towards a December rate hike and on the back of these policy expectations and firmer inflation numbers, the 10-year U.S. Treasury yield ended October at its highest level since May. The trade-weighted dollar appreciated 3% over the month. Neither the European Central Bank nor Bank of Japan made changes to their policy mix. Business activity surveys in the U.S., Eurozone, Japan, and China all showed a modest improvement in October. The global cycle continued to chug along.

While more than half of all global sovereign bond yields remained at or below zero, U.S. interest rates (as measured by the 10-year Treasury) rose another 24 basis points to end the month of October at 1.84%. This is close to 40 basis points above 2016 lows experienced in late July. Multi-asset portfolios were helped in multiple ways from this move: Emerging market equities continued to show resiliency in October, outperforming global equities by 1.9% and large cap U.S. equities by 2%, confounding fears by external commentators that U.S. dollar strength would further impede emerging market growth. Positioning in multi-asset portfolios reflects a thesis that much of the U.S. dollar strength has already been priced into EM markets and currencies, although we are watchful for any short-term downside risk following the U.S. presidential election.

In October, investors gravitated toward larger cap, higher beta stocks despite the market decline. Defensive stocks and midcap stocks had become expensive and bore the brunt of the sell-off along with small cap. Value stocks were unusually cheap and generally held up better than their growth counterparts. Financials, including bank stocks, rallied as the Fed moved closer toward a December rate hike and the yield on the 10-year Treasury hit its highest level since May. The materials sector rallied outside of North America benefitting from currency effects. Utilities outperformed across the cap spectrum. Healthcare stocks sold off. Biotech led the decline as political uncertainty around access to, and the cost of, healthcare weighed on stocks, as did slower than expected sales growth in the sector. REITs also lagged. With Chinese Purchasing Managers’ Index (PMI) data surprising on the upside in October and attenuated concerns on China hard landing risk, resource-oriented countries like Russia and South Africa fared well despite the risk of a rate hike. Brazil continued its spectacular run in 2016 and, together with generalized strong performance from emerging market large cap names, helped the emerging markets index outperform U.S., Europe and global markets. Japan performed well relative to the other regions, however, helped by currency appreciation.

The global investment grade government bond market lost 1.23% in USD hedged terms in October, as concerns about inflation returned to the fore along with doubts about central bank policy efficacy. The U.S. treasury yield curve steepened noticeably, with the 10-year yield surging 24 bps to reach 1.84%. The futures-implied probability of a December Fed hike jumped from 59% to 71%, as 3Q GDP was revised upward to a better-than-expected 2.9%.   While global investment grade credit struggled with higher interest rates (returning -0.97%), the U.S. high yield corporate sector stood out with a 0.39% return. This was driven in large part by the 7% intra-month surge in WTI oil, which caused the U.S. high yield independent energy sector to return 0.73%. The U.S. bank loan sector returned 0.83%, driven in part by its floating rate nature making it preferable to fixed rate debt in a rising rate environment. Likewise, non-agency mortgage credit performed well, supported by the improving U.S. economy and housing market. The USD outperformed major developed market currencies on the expectation of higher U.S. government yields and increased prospects of a Fed rate hike in December, beating the euro by 2.28% and the Japanese yen by 3.33%. British pound sterling lost 5.59% against the dollar during October on concerns of a ‘hard’ Brexit, as British prime minister Theresa May confirmed that she will trigger Article 50 (official action kicking off Brexit) in March 2017. The Brazilian and Mexican currencies outperformed the USD by over 3% aided by the surge in oil, with the latter currency also aided by Trump’s slump in the polls.

The REIT market appears to have largely priced in a December Fed hike, though REITs continued to display shorter-term rate sensitivity, down over 5% and lagging most other segments of the equity market, as the U.S. 10-year Treasury yield trended upward 24 bps. Oil fell in October as doubts about OPEC’s ability to reach a deal in November weighed on prices, while the industrial metals sector rose on signs of a surge in Chinese industrial activity. Grain prices recovered from their sharp Q3 decline thanks to strong export demand for soybeans. The 3% decline in WTI prices prompted a sell-off in energy-related listed infrastructure companies, which fell 5%. REIT earnings were largely in line with expectations, though stable operating results and upbeat management commentary were not enough to stem the sell-off through the second half of the month. The FTSE/EPRA NAREIT Index was down -5.7%. Despite the headwind of the U.S. 10-year Treasury yield increase, both electric and multi-utilities sectors in listed infrastructure outperformed the S&P Global Listed Infrastructure Index, partly due to strong Q3 numbers for some of the larger companies. Overall, the S&P Global Listed Infrastructure Index fell -2.8%. 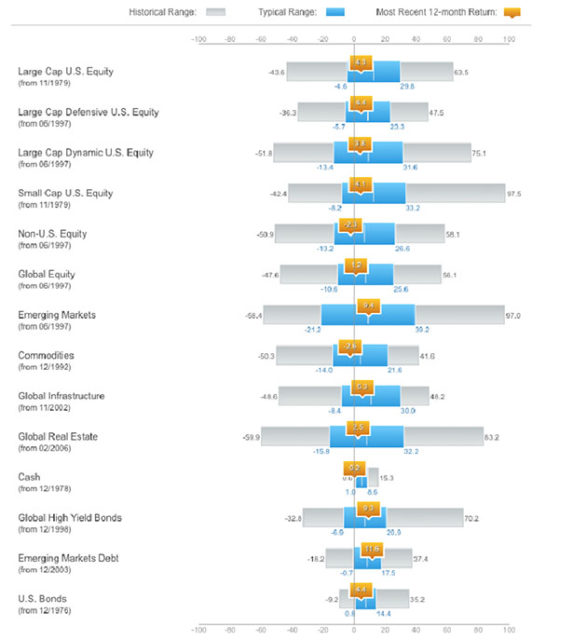