Last September, I posed the question “when will PBGC premiums force a change in contribution policy?” A look at the agency’s accounting statements points to the answer: “sooner rather than later.”

The impact of recent premium increases is clear in the PBGC’s latest annual report, published shortly after that earlier post. Commenting on it in a year-end review, Michael Moran of Goldman Sachs noted that while PBGC flat rate premium income jumped by 12% in 2016, variable-rate premium (VRP) income leapt up by 81%. Startling as that observation is, it perhaps does not do justice to just how big the increases are.

Let’s set the numbers into the longer term context: 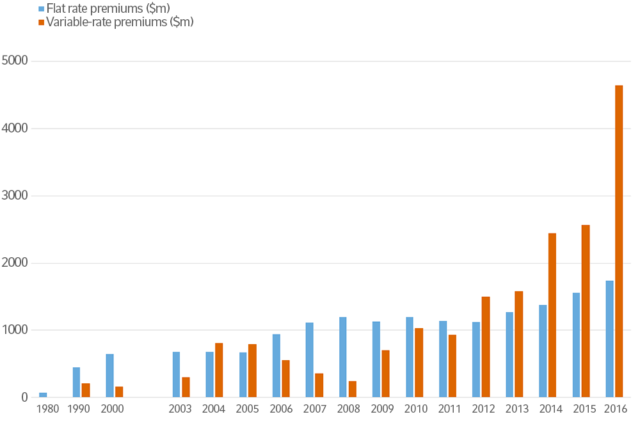 PBGC premiums famously started at $1 per participant following the passage of ERISA in 1974. Total premium revenue in 1980 was $71m. That sum started to rise materially from 1986 following premium rate increases and the introduction of the variable rate premium from 1988. By 1990 premium revenue had reached $659m and it crossed the $1bn threshold in 1996. It took until 2010 to pass $2bn, and just four years more after that to pass $3bn. Total premium revenue passed $4bn in 2015 and $6bn in 2016.

While the 2016 VRP number is an 81% increase on 2015, it is also a five-fold increase over 2011 and almost a twenty-fold increase over 2008. This sharp increase in revenue reflects not only changes to the premium rate (from $9 per $1,000 of shortfall in 2008 to $30 by 2016) but also an increase in plan shortfalls, since plan funding overall was much stronger prior to the financial crisis.

The explosive growth in VRP revenue is probably not over: 2016’s $30 rate will be at least $42 by 2019, albeit with a per participant premium cap (currently $517), a cap which will presumably apply to an increasing number of plans.

What is revenue for the PBGC is, of course, an expense for the sponsors of pension plans.

Techniques to manage that expense include reducing plan headcount. That’s especially worthwhile in cases where the pension being paid is small and/or if the VRP premium cap applies. And the cost of the VRP can be reduced by accelerating contributions to underfunded plans, so there’s a big incentive now to do that: the increases in PBGC expenses are beginning to overcome plan sponsors’ reluctance to contribute more than the minimum they are required to. In this regard, it is notable that in an interview with the Wall Street Journal late last year, Fran Shammo, outgoing CFO of Verizon Communications, explicitly identified PBGC premium increases as a consideration in pension-related decisions. It would have been hard to imagine such a comment from a major corporation CFO five years ago.