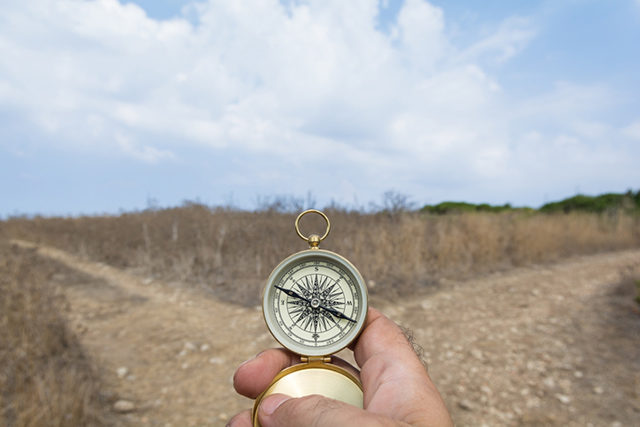 In our latest market outlook, we wrote about the growing divide between strong survey-based measures of economic growth and weak actual consumer and business spending. This gap continues to be one of the biggest puzzles that economists are grappling with. Reconciling this issue has important implications for the near-term trajectory of the U.S. economy and market. Our analysis gives us reason for more cautious U.S. market expectations in 2017.

Surveys of consumer and business confidence spiked higher after President Trump’s election victory in November. The feeling was that, with Republican control of both the executive and legislative branches of government, the new Administration could deliver on sweeping tax cuts and regulatory reform. But progress in Washington, D.C. has proven slow1. Treasury Secretary Steven Mnuchin recently said that the Administration’s August timeline for tax reform was now “highly aggressive to not realistic.”  Fiscal stimulus increasingly looks like a 2018 story.

This is all the more relevant because there is evidence2,3 suggesting that consumers and businesses may wait on the sidelines until these pro-growth policy initiatives take effect. This increases the risk of an “air pocket” scenario, in which the U.S. economy grows at a mediocre (2% or slower) pace in 2017.

Recent data on actual consumer and business spending have been weak and support this narrative. Real GDP growth slowed to 0.7% in the first quarter – the weakest it’s been in three years. Despite the highest levels of consumer confidence in a decade, real consumer spending was almost non-existent in the first three months of the year. And business investment also underperformed the growth rates suggested by the business surveys (see chart below). Early evidence for the second quarter doesn’t look much better. U.S. car sales were below expectations for the second month in a row in April and loan demand from consumers and businesses has slowed significantly in recent months. 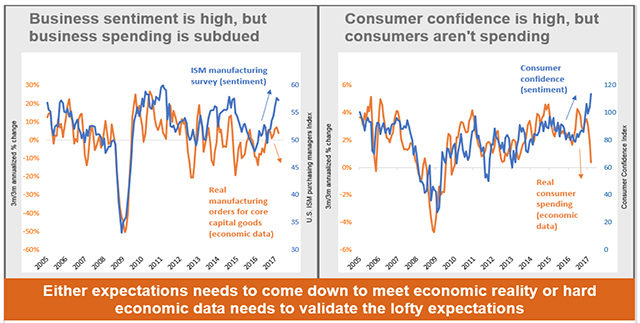 Against a backdrop of expensive U.S. equity market valuations, we believe a cautious tone is warranted. Non-U.S. markets offer a more compelling opportunity, in our view, across the key building blocks of a robust investment strategy: cycle, valuation, and sentiment. Economic and earnings growth have strengthened in Europe and the emerging markets and these markets continue to trade at relatively attractive valuation discounts to the United States.

In our view, the U.S. equity market is currently priced for perfection: current valuations—and sentiment—assume a seamless execution of the new Administration’s growth-oriented economic priorities. However, hard economic data—actual business and consumer spending—appear to reflect some uncertainty about the Administration’s ability to achieve such a seamless execution, given the political reality of governing in Washington, D.C. For the time being, we see more potential for investment opportunities outside the U.S.

1As my colleague Erik Ristuben recently pointed out, this is not necessarily a Republican problem. But rather a design feature of our government. It is very difficult to enact sweeping legislative change in the United States.
2The minutes of the Federal Reserve’s March FOMC meeting noted that “business contacts in several…Districts said they were waiting for more clarity about government policy initiatives before implementing capital expenditure plans.”
3The April NFIB survey noted that “small business owners are paying close attention, and they are making decisions that affect the economy based on how Washington performs. The drop in expected business conditions should be a warning to Washington that health care reform, regulatory reform, and tax reform have implications far bigger than politics.”