Retirement date debate: When should your risk exposure hit bottom?

The inner workings of target date funds (TDFs) usually include an asset allocation formula that automatically adjusts as investors age. Think of it as an instrument landing system (ILS) for pilots who are approaching the landing strip at an airport.

TDFs have grown popular because, like a pilot’s ILS, the target date formula does some of the work for prospective retirees who don’t want to fly solo. In a worker’s early career, the TDF is designed to allocate suitable levels of exposure to growth assets – more equity fuel because the investor is likely to withstand some choppy air along the journey.

As a worker nears retirement, however, the internal workings of the TDF will throttle down the fund’s exposure to growth assets (e.g., stocks) in favor of income assets (e.g., bonds) – all in an effort to create a smoother ride as the destination nears. And just as ILS systems need to account for many variables, TDFs will need to evolve to accommodate individual inputs, preferences and course corrections.

With all this automation and convenience, one debate still rages. Where and when along this glide path should the investor’s exposure to growth stocks hit bottom? When should the allocation to growth stocks reach its lowest point for that investor?  In other words, when do the wheels actually chirp against the terra firma of sustainable retirement?

To take on this question of TDF engineering, I worked with my colleague Dan Gardner to examine two approaches to glide path programming. We refer to this as the “great date debate:” 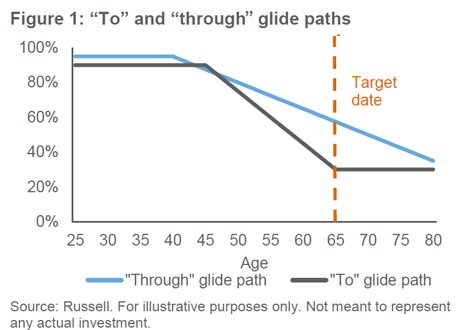 So, if you’re boarding a flight on TDF Airlines, which of these is the better choice?

According to Morningstar’s 2014 Target-Date Series Research Paper, most TDF money is managed with a “through” or de-risking glide path (the blue line). We actually prefer the flat glide path (gray line) because our research shows it may provide the same level of expected retirement income but with the potential for less downside risk. The ‘through” glide paths often expose participants to higher risk just before they retire1?right at a time when they can least afford a negative market environment.

We also believe this “to” approach may reduce the behavioral risk that can creep into the picture when retirees reactively add or subtract risk during the “through” retirement years.

At a minimum, advisors and investors need to understand the inner workings of their particular TDF, so they can be comfortable staying seated during the entire glide path to and through retirement

1 Morningstar®. Acheson, Holt, Rupp, Spica and Yang. “2015 Target-Date Fund Landscape.” April 2015. Appendix 2:  the average equity allocation for “through” glide paths at 0 years to the target date exceeds that of “to” glide paths.