We have a key belief about saving for retirement: The potential for additional upside is not worth an outsized risk of devastating downside.

Case in point: The recent Reuters Special Report on the riskiness of Fidelity Investments’ target date series Freedom Funds highlights important issues on the risk faced by participants in target date funds—risks that may become painfully apparent if or when equity markets pause or reverse their nearly decade-long climb.

The challenge with the Fidelity glide path isn’t so much that they are suggesting a bad portfolio—after all, 60/40 is common enough to be the punchline for most any asset allocation joke. But we believe they are recommending a portfolio with a risk/reward tradeoff that is well above the level necessary for the participant profile their glide path is designed for.

Fidelity Investments is a fund company respected by many, including us. And the report provides a good opportunity to consider how to evaluate a target date fund’s glide path. The fact that the Fidelity Investments’ glide path is more aggressive than virtually all peers (Figure 1) isn’t necessarily damning.  The fact that it is more risky than it needs to be is of greater concern.

Figure 1: Range of equity allocations1 of top 10 “To” and top 10 “Through” glide paths by AUM (silhouette) with Fidelity Investments glide path2 (solid line) and an Average of Maximum and Minimum industry equity exposures at each age (dashed line) 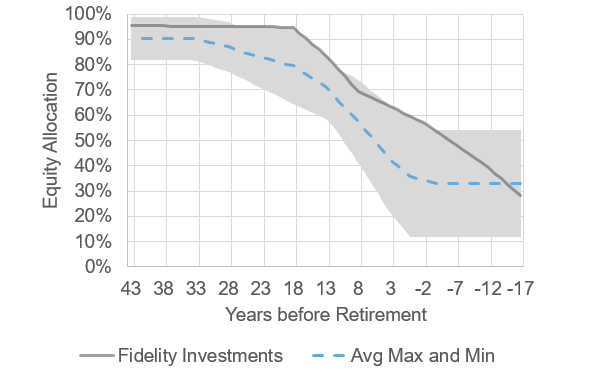 We believe a glide path evaluation should be based on the purpose and goals of the target date funds. Typically, these funds work similarly to that workhorse allocation tool, mean-variance, in the sense that investors in target date funds seek to maximize reward while minimizing risk. In particular, glide paths seek sufficient growth to achieve a desired retirement income—that’s the reward. The risk comes in many forms, but for simplicity’s sake, let’s focus on the main two:

Let’s refer to these two risks as long-term risk (the possibility that the strategy may not succeed in its ultimate goal of providing retirement income) and short-term risk (the short-term volatility that may be so unsettling that participants abandon the plan).

Conveniently for our purposes and certainly to their credit, Fidelity Investments has carefully described the typical participant for whom their solution has been designed.3  They seek to replace 50% of pre-retirement salary from the assets within the account of a full-career employee who saves 8% starting at age 25 (including both employee and employer contributions) with the savings rate increasing to 13% by the time of retirement. Combining this pattern with national salary growth patterns and Fidelity Investments’ suggestion that retirees should have accumulated 8x their salary by the age of 67, we can calculate the evolution of the account balance of a typical participant who receives an inflation-adjusted return of 5.4% on stocks and 1.5% inflation-adjusted return on bonds each year.4 Fidelity Investments does not disclose their market return assumptions. We have substituted the Russell Investments 20-year capital market assumptions4 for a diversified mix of growth assets and a diversified mix of capital preservation assets. In order to determine the return of the portfolio in a bad event, we assume standard deviations of 17% and 3.7% and a correlation of 0.3. In fairness, it is difficult to know how these assumptions compare to those used by Fidelity Investments. In order to work with round numbers, let’s assume the participant has a final salary of $100,000.

Now let’s consider the short-term risk and the long-term risk based on the profile of the target participant. Short-term risk may be manifest as sleepless nights, but from a more analytical perspective we measure it as volatility—the impact of the allocation strategy on the current account balance.  Long-term risk addresses the impact of the allocation strategy on the long-term goal—retirement income—and will be outlined in greater detail in a moment.

We believe short-term risk has both a monetary dimension—how many dollars might I lose in a bad5 outcome—in addition to a percentage loss dimension.  The number of dollars lost from a bad portfolio return is simply the percentage loss multiplied by the value of the account.  Participants may become squeamish in the face of this volatility and the associated significant losses that may accompany it. We believe this risk—of strategy abandonment—deserves serious consideration.

As noted above, the industry average glide path6 achieves the retirement income goal and due to both its lower anticipated account balance and more conservative allocation, it does so with lower short-term risk.  This doesn’t mean that it is a more efficient portfolio, but does demonstrate that there is an efficient portfolio that achieves the goal with lower risk than the strategy provided by the Fidelity glide path.

A profile of long-term risk

Long-term risk is measured as the decline in retirement income (either dollars or percentage) associated with a bad portfolio return in a given year and is a bit more challenging to assess. A profile of long-term risk for both the Fidelity neutral glide path and the industry-average glide path are shown in Figure 2.

The decline in retirement income will depend on two key factors:

Figure 2 maps out the impact of a bad portfolio outcome on the level of retirement income, according to the number of years before retirement. Of course, we believe less risk is preferred over more, and generally it is better to accept risk earlier during the career rather than later, in order to provide the greater flexibility and a longer time before planned retirement to respond to the event. Participants on the verge of retiring have little recourse other than to push out their retirement date—if they have that option—or to accept a more modest level of retirement spending. This is particularly true in the current environment of high market multiples that may lead to much greater 1-in-20 drawdowns than during periods of lower multiples.

As the account grows, so does the risk to retirement income. But this is typically counterbalanced by a decline in the equity exposure along the downward-sloping glide path. For a glide path such as Fidelity’s, the long-term risk occurring 20 years before retirement (when the portfolio holds almost 95% in equities) is around $10,000. That is, a bad portfolio return (combined with expected market returns in every other year) will decrease retirement income by $10,000 during each year of retirement. This represents about 15.5% of projected retirement income, or 23% of the targeted amount, based on 8x final salary guidance. The long-term risk appears to peak approximately 15 years before retirement. 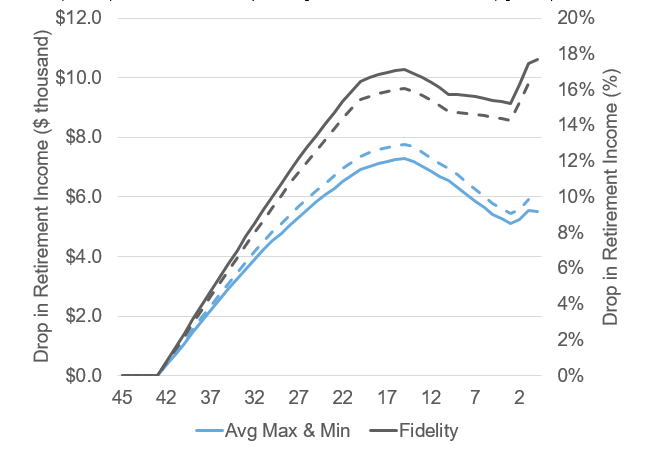 As a comparison, the industry-average glide path (defined by the midpoint between the industry maximum and minimum equity holdings) suffers only a $7000 decline in annual retirement income if a bad market event occurs at the same time point. This damage reduction is a combination of the fact that this less aggressive path would be expected to have a lower overall accumulation as well as a less aggressive allocation 20 years prior to retirement.

Some of the $10,000 (or $7000) loss in annual retirement income may be recaptured with a market rebound, but regardless of the specific sequence of returns, the pain of a bad outcome for the Fidelity Investments glide path will be noticeably higher than that of our simple representation of the industry.

Like short-term risk, the profile of long-term risk demonstrates that the industry average accomplishes the desired reward at lower risk than the Fidelity strategy.

The level of both long-term risk and short-term risk of the Fidelity Investments glide path is clearly higher than that of other industry providers, but the anticipated potential reward is also higher. To the extent that the anticipated level of reward is well above what is called for by the participant profile, participants are likely to experience greater risk and more potential regret than necessary.

Our belief is that the pain of potential devastation outweighs the pleasure of potential reward. In other words, retirees can survive missing out on higher than intended reward. But bad outcomes at the wrong time could devastate retirement plans. A glide path with less risk can help prevent that.

1 As determined from publicly available prospectus and website statements during early 2017 of strategic or neutral policies compiled by Russell Investments.

2 Based on November 2017 updated prospectus http://fundresearch.fidelity.com/prospectus/funds-retail

4 As of 4Q 2016. Please note all information shown is based on assumptions. Expected returns employ proprietary projections of the returns of each asset class. We estimate the performance of an asset class or strategy by analyzing current economic and market conditions and historical market trends. It is likely that actual returns will vary considerably from these assumptions, even for a number of years. References to future returns for either asset allocation strategies or asset classes are not promises or even estimates of actual returns a client portfolio may achieve. Asset classes are broad general categories which may or may not correspond well to specific products.

5 We are defining a bad portfolio return as a 1-in-20 downside event, but could substitute a 2 standard deviation event or other downside measure without impacting the conclusions.

6 This is the average of the maximum and minimum of the glide paths at each age within the group of top 10 “to” and top 10 “through” glide paths.