The 115th U.S. Congress delivered its first major legislative accomplishment of 2017 today, passing a landmark bill that makes sweeping changes to the country’s tax code. The bill is an important one for financial markets, as it lowers tax rates for both households and businesses and is likely to provide a modest boost to both the U.S. economy and corporate earnings. But the price tag for this stimulus package isn’t cheap. The Joint Committee on Taxation estimates that it will cost the U.S. government roughly $1.5 trillion over ten years.

From a timing standpoint, the passage of the bill is very unconventional, given that it’s late in the economic cycle. In a nutshell, Congress is effectively adding accommodation while the U.S. Federal Reserve (the Fed) is removing it. In other words, two of our most important government institutions are working at cross purposes. It’ll be fascinating to see how this all plays out.

Typically, fiscal policy—while slow to move through Congress—has an immediate impact on the economy once enacted. On the flip side, monetary policy is often fast to implement but has a delayed impact on the economy. In this spirit, the new tax bill is likely to provide a short-term bump for activity that the Fed will very carefully take away. With that as a 30,000-foot view, let’s zoom in on some of the key provisions of the legislation.

The single most important provision for markets is the reduction in the statutory corporate tax rate from 35% to 21%. The math gets very complicated very quickly, but when we factor in a number of offsets like the Base Erosion and Anti-Abuse Tax (BEAT), we estimate that the effective corporate tax rate for the S&P 500 ® Index companies—what companies actually pay on their tax bill—will be reduced by 3 to 5 percentage points in 2018. Put differently, this is likely to provide a 3 to 5 percentage point boost to 2018 earnings growth. That’s good news and partly explains why the U.S. equity market has outperformed most of its global peers since the end of October (in anticipation of this), as the chart 1 below shows. 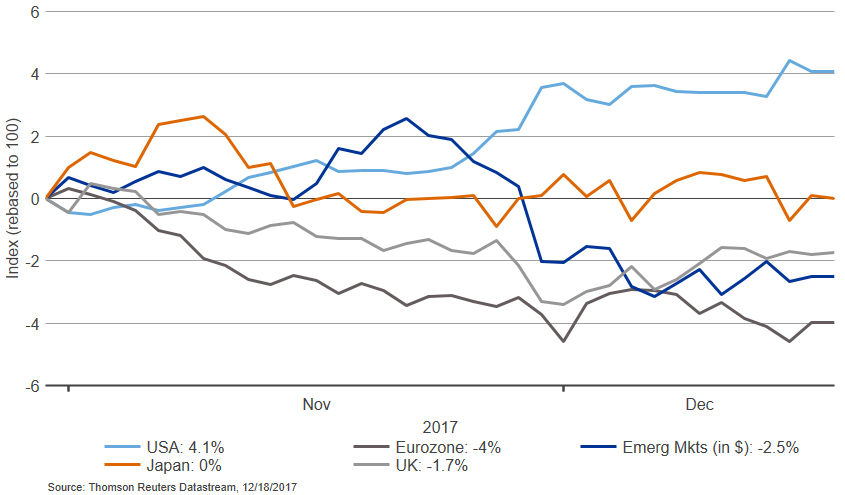 Another important provision for the corporate sector is the so-called “deemed repatriation,” or one-time tax on $2.6 trillion of accumulated unrepatriated foreign profits of U.S. businesses.2 We’d caution, however, that the market implications of this line item are likely to be minimal. From a currency perspective, more than half of this money is already estimated to be parked in dollar-denominated assets like U.S. Treasuries and corporate bonds. So, while these represent significant cross-border flows, there is likely to be very little foreign currency actually exchanged.

The bigger question is what companies will do with the money after they bring it home. One option: nothing. That’s boring, but quite possible. Another likely option is share buybacks. But here, it’s important to remember that buybacks should theoretically detract from shareholder value when a company’s stock is trading above fair value (shareholders already have a dollar-per-dollar claim on the cash). Another (less likely) option is capital expenditure. This would arguably be the best outcome for the long-run health of the economy. But the challenge is that many U.S. businesses are not cash-constrained to begin with, so freeing up more working capital is unlikely to materially impact their investment decision-making. The final channel is the potential for more merger and acquisition activity which could provide a tailwind for the price of target companies, which are usually small- and mid-sized businesses.

The new bill also overhauls the tax system for individuals—in unsurprisingly complex fashion. To quote Albert Einstein: “the hardest thing in the world to understand is the income tax.” The new bill is no exception. But it’s well-intentioned—it cuts income taxes for many families and, for example, lowers the highest marginal rate for individuals from 39.6% to 37%. It also dis-incentivizes the use of the more complicated, itemized deduction system. The former is likely to provide a tailwind to consumer spending next year. The latter is likely to have a number of unforeseen implications on the real economy and markets. As the full text of the legislation is over 700 pages long, we don’t have time to go through all of the details in this post. But a quick example: homeowners will now only be allowed to deduct mortgage interest on the first $750,000 of new loans (down from a previous cap of $1 million). The bill also limits the deduction of state & local taxes (including property tax) to $10,000. These provisions, when combined, could crimp the demand for luxury homes as well as the demand for real estate in high-tax metropolitan areas.

We estimate that the new tax bill will boost U.S. real gross domestic product (GDP) growth by roughly a quarter of a percentage point in 2018. As such, we’ve bumped up our GDP growth forecast slightly to 2.3% for next year. The bill is also likely to boost U.S. earnings by 3 to 5 percentage points. Accordingly, we’ve marked up our dollar earnings forecast from 5% to 8-10% for next year. Per share earnings growth could also get an extra tailwind from share buybacks but, as noted above, we don’t see those flows as adding value for shareholders against a backdrop of expensive market valuations. A lot of tax optimism is already reflected in prices, and we aren’t changing our cautious outlook for U.S. equities on the back of this.

In terms of our market strategy, our research suggests that tax reform is likely to be a near-term cyclical tailwind for value stocks and small-cap stocks. There is significant uncertainty surrounding these forecasts. For one, we are basing them on the historical propensities of households and businesses to spend the windfall from the tax plan. But perhaps more importantly, the economy is moving beyond full employment and the Fed is likely to take away any excessive fiscal stimulus with rate hikes. Given the usual lag time seen with adjustments to monetary policy, we believe the new tax bill will translate to strong growth in 2018, but set the stage for a potentially more interesting and turbulent 2019.