The U.S. Municipal High Yield sector can often be overlooked in a tax-managed portfolio. Whether it be the size of the sector (only $94 billion in size)1, or the amount of due diligence required to access the sector as compared to the investment grade municipal sector, many clients invested in tax-managed solutions may be under exposed. However, for a sector that has historically produced tax equivalent returns similar to equities at half of the volatility but with increased risk, we think tax-sensitive investors should consider taking another look.

Today, valuations can be presented as being very attractive, or they can be considered average. We think it is important to present both cases. To make a reasonable assessment, investors need to know what is driving spreads in the market. Additionally, it is important to combine this with an analysis of the municipal credit cycle. The image below would suggest that the municipal high yield sector is very attractive today relative to history. The spread of high yield municipal to investment grade municipal is 1.2 standard deviations wide.2 With that said, we think it would be imprudent to consider spreads alone. A major driver of spreads today is the index concentration of Puerto Rico and Tobacco securities3, two higher yielding sectors that comprise 45% of the Bloomberg Municipal High Yield Index.4 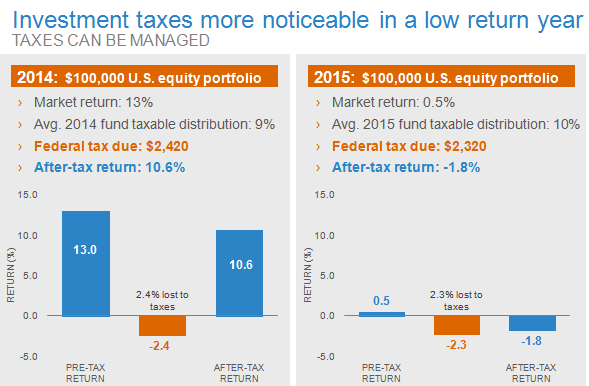 Source: Bloomberg Research. (bp)=basis points. Given that the Morningstar average credit quality of high yield municipal funds5 is BBB (which is technically Investment Grade), and many invest in a combination of high yield and investment grade securities, we think looking at the BBB municipal spread to the AAA municipal spread is a relevant alternative value indicator. In this case, spreads are slightly wider than average. With spreads being compressed in most fixed income sectors, and the credit cycle nearing the latter stages, where does high yield municipal stand then? Historically, municipalities lag the corporate credit cycle, primarily due to the lagged effect of tax receipts in an improving economic environment. According to Morgan Stanley research,7 when the economic cycle is in a late expansion, municipalities tend to be in an early expansion phase. As further evidence, during the first quarter of 2015, Fitch’s U.S. public finance rating upgrades exceeded downgrades (by 33 to 20), marking the fourth consecutive quarter for net upgrades. In addition, the number of Fitch Negative Rating Outlooks was at its lowest level since the fourth quarter of 2008.6 We think spreads are attractive in the current municipal cycle and we think they’re attractive relative to other areas of fixed income for tax sensitive investors.

The average 12-month yield for Morningstar’s high yield municipal category was 4.34%, as of March 31, 2015. More impressively, the tax equivalent yield for an investor in the highest tax bracket of 43.4% would be 7.67%. For an investor to achieve such a yield in the taxable corporate high yield market, one would need to reach for yield in an area such as the energy sector, an area where default expectations are elevated due to the recent meaningful drop in energy prices. Additionally, the average across Morningstar's high yield municipal category has more than 50% in investment grade rated securities, thus the average credit quality of these funds is higher than the average for corporate high yield funds, which are primarily invested in high yield. 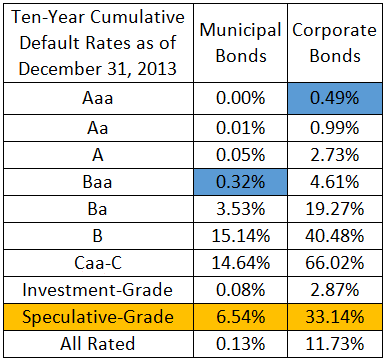 Many investors are searching far and wide for attractive returns in the current low rate environment, often stretching for yield and taking risks that may be uncompensated. Tax-managed investors searching for attractive risk-adjusted returns might consider municipal high yield as part of their overall portfolio solution. The power of tax-exemption has resulted in historically competitive risk-adjusted returns for tax-sensitive investors. Coupled with valuations that are appealing in the current market cycle, historical default rates that may more than compensate the “stretch for yield,” and tax-equivalent yields that would take a real stretch in the corporate high yield market in order to achieve, we believe municipal high yield is worth consideration in today’s market environment.
1 Based on the Bloomberg Municipal High Yield Index as of April 30, 2015. 2 Assuming a normal distribution, 1.2 standard deviations would imply that 88.5% of the time the spread would be less than it is today. 3 Puerto Rico has been well publicized in its downgrade to below investment grade. The city continues to tackle its high debt burden. According to the 1998 Master Settlement Agreement, tobacco companies agreed to pay 46 states for expenses related to smoking. Many states sold bonds backed by the future settlement revenue, however, the future settlement revenue has an assumed smoking decline consumption rate that is much more conservative than what has materialized. As a result, the future revenue is likely to be less than anticipated and many of these bonds are expected to default. 4 17.73% for tobacco and 27.7% for Puerto Rico. Bloomberg Municipal High Yield Index as of 5/18/15. 5 Morningstar Peer Data as of 12/31/2014. 6 Source: MacKay Shields Municipal Managers. 7 Morgan Stanley, Municipal Outlook 2015. The Bloomberg U.S. Agency Index measures the performance of the agency sector of the U.S. government bond market and is comprised of investment grade U.S. dollar-denominated debentures issued by government and government-related agencies, including FNMA and FHLMC. The Bloomberg Mortgage-backed Securities Index is a market value-weighted index which covers the mortgage-backed securities component of the Bloomberg U.S. Aggregate Bond Index. The Bloomberg Municipal Bond Index is an index, with income reinvested, representative of the tax-exempt municipal bond market with a maturity of at least one year. Bloomberg U.S. Aggregate Bond Index: An index, with income reinvested, generally representative of intermediate-term government bonds, investment grade corporate debt securities, and mortgage-backed securities. (specifically: Bloomberg Government/Corporate Bond Index, the Asset-Backed Securities Index, and the Mortgage-Backed Securities Index). The Bloomberg U.S. Credit Index includes both corporate and non-corporate sectors. The corporate sectors are Industrial, Utility, and Finance, which include both U.S. and non-U.S. corporations. The non-corporate sectors are Sovereign, Supranational, Foreign Agency, and Foreign Local Government. The index is calculated monthly on price-only and total-return basis. Bloomberg Global Treasury Index tracks fixed-rate local currency government debt of investment grade countries. The index represents the Treasury sector of the Global Aggregate Index and currently contains issues from 37 countries denominated in 23 currencies. The Bloomberg U.S. High Yield Index covers the universe of fixed rate, non-investment grade debt. Eurobonds and debt issues from countries designated as emerging markets (e.g., Argentina, Brazil, Venezuela, etc.) are excluded, but Canadian and global bonds (SEC registered) of issuers in non-EMG countries are included The Russell 2000® Index measures the performance of the small-cap segment of the U.S. equity universe. The Russell 2000 Index is a subset of the Russell 3000® Index representing approximately 10% of the total market capitalization of that index. It includes approximately 2000 of the smallest securities based on a combination of their market cap and current index membership. The S&P 500® Index: An index, with dividends reinvested, of 500 issues representative of leading companies in the U.S. large cap securities market. Bond investors should carefully consider risks such as interest rate, credit, repurchase and reverse repurchase transaction risks. Greater risk, such as increased volatility, limited liquidity, prepayment, non-payment and increased default risk, is inherent in portfolios that invest in high yield ("junk") bonds or mortgage backed securities, especially mortgage backed securities with exposure to sub-prime mortgages. Investment in non-U.S. and emerging market securities is subject to the risk of currency fluctuations and to economic and political risks associated with such foreign countries. Generally for municipal bonds, only interest from bonds issued within the state is exempt from that state's income taxes.  Municipal bonds are subject to interest rate, credit and illiquidity risk and are affected by economic, business or political developments and may be subject to provisions of litigation, bankruptcy and other laws affecting the rights and remedies of creditors. Standard Deviation is a statistical measure of the degree to which an individual value in a probability distribution tends to vary from the mean of the distribution.  The greater the degree of dispersion, the greater the risk. Indexes are unmanaged and cannot be invested in directly.