As we move into 2015, there is a general expectation that the U.S. will continue on its path of growth and ongoing economic recovery. This expectation has many believing that the Federal Reserve will observe enough improvement in the economy to initiate a hike in the Federal Funds Rate, which is currently sitting at essentially 0%. Guesses for the timing of that first increase range from “by mid-year” to “sometime in 2016.” Regardless of the exact timing, though, there is a pocket of investors who believe the interest rate increase will create problems for the capital markets and a good deal of recent gains may be given back. Of course, nobody knows for sure if, and when, the Federal Reserve will actually increase the Fed Funds Rate. By the same token, no one knows how the markets will react to such a rise. The best we can do is revisit previous rate increases to gain some perspective on what the consequence may be. So that’s what we did. We analyzed the last eight initial rate hikes by the Federal Reserve, dating back to the early 1970’s.

First, we looked at the average returns experienced by markets for the first three months, the first year, and the five years following an initial Fed rate hike.

Sources: Federal Reserve Bank of New York, Stocks: S&P 500® Index (1970 – 1978) and Russell 3000® Index (1979 – December 31, 2014), Bonds: Barclays U.S. Aggregate Bond Index.
Index returns represent past performance, are not a guarantee of future performance, and are not indicative of any specific investment. Indexes are unmanaged and cannot be invested in directly. Returns after the first three months Arguably, the results of the first three months are not very helpful or surprising. A 2.0% equity return over three months is not dramatically different from historical equity return averages for a one-month period. A modestly negative return for bonds (-0.5%) makes intuitive sense with an interest rate increase. (Remember, the price of bonds drops when interest rates rise). Returns after one year The picture changes slightly when you take a one-year view. Markets returned less than historical averages (for the time period examined) during the 12 months following a rate increase – though those past one-year returns were still a far cry from the severe market pull-back that some observers are warning about in today’s situation. Again, like the three-month observations, the results of the one-year view also make sense. Interest rate increases tend to occur after periods of strong economic results, which are often accompanied by stellar equity returns. A modest pause after a strong run-up is not unusual. On the fixed income side, increasing interest rates usually lead to less robust bond returns. Five-year annualized returns Finally, looking at the five-year average suggests that, given adequate time, the markets digest and cope with a rising interest rate environment. The five-year equity averages appear to be in line with long-term, historical equity averages. The bond returns have actually been higher than one would expect given longer-term fixed income market history. However, to caveat expectations, the majority of the time horizon in this analysis (1970 – December 31, 2014) represents one of the greatest bull markets in fixed income market history. Hence, the high return number – but it’s not one likely to be repeated soon given today’s absolute level of interest rates.

Digging deeper into the numbers

Next, we broke these three-month, one-year and five-year annualized averages down into the individual rate hikes to gain greater perspective on the range of returns that have occurred after these past initial Fed Funds Rate hikes, as shown in the table below. 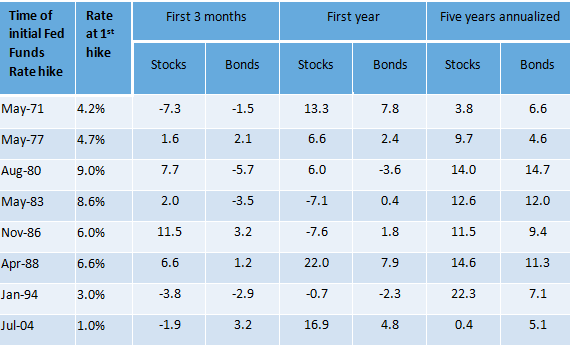 Sources: Federal Reserve Bank of New York, Stocks: S&P 500® Index (1970 – 1978) and Russell 3000® Index (1979 – December 31, 2014), Bonds: Barclays U.S. Aggregate Bond Index.
Index returns represent past performance, are not a guarantee of future performance, and are not indicative of any specific investment. Indexes are unmanaged and cannot be invested in directly. Returns after the first three months We found that, with the exception of the first hike in May of 1971, which saw equities drop -7% over the next three months, the initial three-month equity reaction has been relatively mild with more frequent upside occurrences than downside instances. Bonds have been positive as often as negative during the first three months post hike, with the most difficult period coming in the fall of 1980. Returns after one year The average first-year post hike returns have a wider distribution than the three-month performance. The nearly-30% (from -7.6% to positive 22.0%) demonstrates that there is significant uncertainty about how the equity market may react in the year following a rate hike. However, uncertainty does not necessarily spell trouble for investors and they should gain some level of comfort that five of the eight periods were positive and the three negative outcomes remained within the single digits. The fixed income picture shows a narrower range of results, with negative results produced in only two of the periods over this span. 5-year annualized returns Finally, the five years following a rate hike appear to produce the type of returns that one might expect to experience during any five-year (annualized) run in the capital markets: all the equity returns are positive. The worst outcome (0.4%) was for the period that included the Great Financial Crisis of 2008 (and its calendar year return of -38% for the S&P 500® Index) – and even that five-year period came in at above zero. Bond returns were all positive – and could even be characterized as historically high. Again, though, we caution today’s bond investors against expecting a similar level of bond returns for the foreseeable future.

There seems to be an undercurrent among some investors that an increase in the Federal Funds Rate will spell trouble for the capital markets this year. But history suggests that’s not necessarily the case – and it could maybe even be flat out wrong. The reality is: no one knows if the Federal Reserve will raise rates in 2015. In addition, no one knows what the impact on the markets may or may not be if such a hike does occur. Given this, investors looking to position their portfolios in anticipation of a potential rate hike may be well-served to fall back on tried and true best practices: discipline and diversification.
Site preferences
Login Register