Why is the DOL doing this?

The recent announcement of the Department of Labor’s (DOL) new “fiduciary standard” rule for advisors has elicited many responses from the advisors I have spoken with over the past few weeks. One question I’ve been asked repeatedly is “Why is the DOL doing this?” Many suspect the DOL was principally driven by political or ideological motivations. While this may have been a factor, I think the DOL’s interests may be more tangible: informed by countless studies published over the years showing that retirement portfolio returns of individual investors lag those of institutional investors by substantial margins. The most recent such report to catch my eye was published by Boston College’s Center for Retirement Research in December 20151 and it very clearly points out the challenge. One thing that policy makers understand is that there are three pillars of retirement funding: 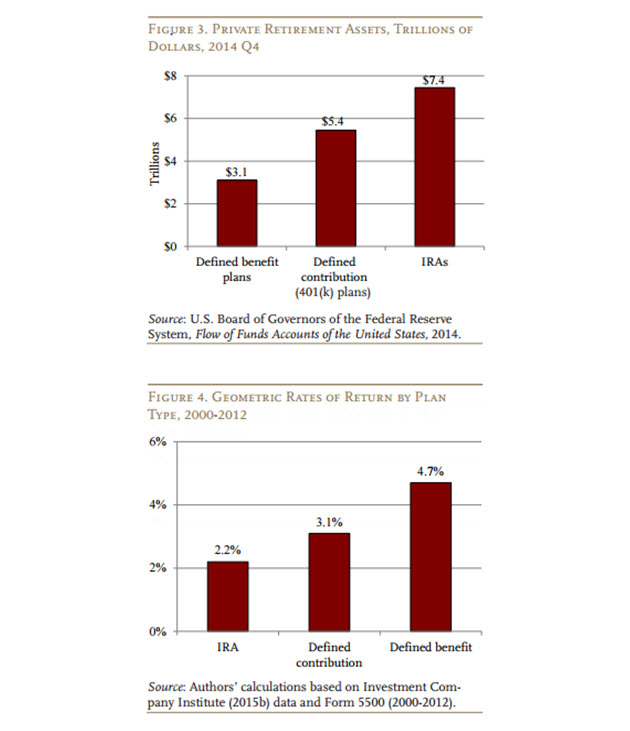 For illustrative purposes only. Combining the three pillars of retirement funding with the reality of portfolio returns noted by Boston College, one can quickly conclude that the first two pillars are currently on shaky footing. In fact, according to Boston College, Individual Retirement Accounts (IRAs) generated only 47% of the returns that defined benefit (DB) plans delivered from 2000-2014. If this trend continues, the pressure on the third pillar (the government) will likely continue to rise. Yet, the government is not in a position to take on more financial responsibility for retirees. So, the political calculus may be as simple as politicians realizing that they are unlikely to win any re-election campaigns if they are viewed as having: So many politicians’ motives surrounding new regulation in retirement savings may be as simple as devising strategies to improve the performance of the two non-government pillars of retirement income so the politicians hoping to be re-elected can avoid the unattractive alternatives of poverty or raising taxes. The Employee Retirement Income Security Act (ERISA) of 1974 appointed the DOL as regulator for defined benefit retirement plans. The fiduciary standards created under ERISA are considered by many to be key drivers of the superior returns defined benefit plans have enjoyed relative to those earned by the other two retirement income pillars. I have spent my entire career operating under the fiduciary standards of the DOL for defined benefit plans. Russell Investments itself has been a principal industry architect of investment processes that conform to that fiduciary standard. Over the last three plus decades, we have advocated strongly for the institutionalization of individual investment strategies, through strong diversification, strong due diligence of manager selection and targeted end investor outcome orientation.

While the new regulations are causing consternation and concern for many advisors, I for one, strongly believe that Russell Investments is in a unique position to help advisors adjust their approaches to conform to the new regulations and differentiate themselves from their competitors.