Can small be big? Find the undiscovered potential of small cap for investors

Portfolio manager, Megan Roach, explains why small cap stocks could potentially provide outsized incremental return for investors who are willing to go off the beaten path. 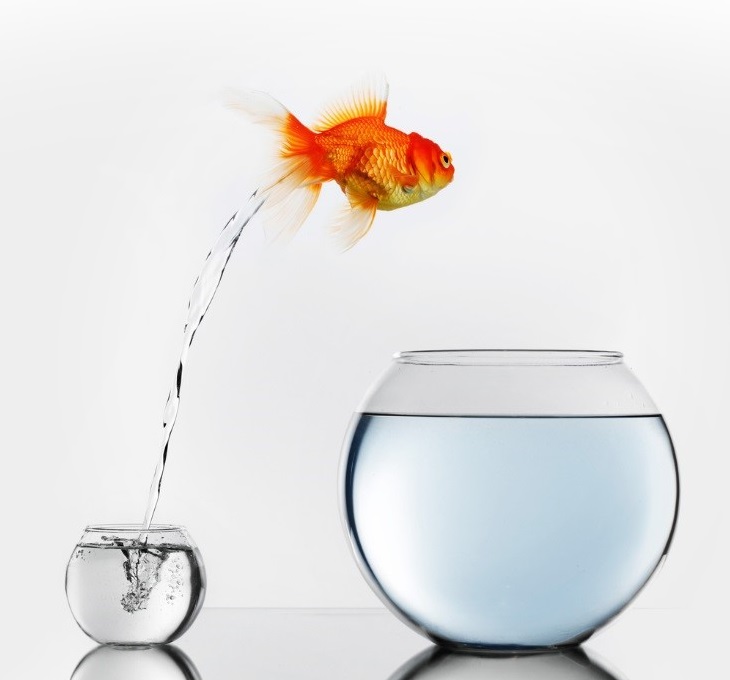 Isn’t it great to discover a neighborhood gem of a restaurant? Maybe it’s a place that’s a little out of the way, and hasn’t been reviewed by a newspaper. Or, it just opened and has a rising star of a chef. By this time next year it will be packed, but for now you have it to yourself. Finding a great small cap stock can be a lot like discovering that hidden restaurant, except the rewards may be financial rather than gustatory.

The current definition of a small market capitalization stock (“small cap”) is a company with a market capitalization of $133 million to $3.86 billion1.  Compared to a large cap company, such as General Electric with a market cap of around $280 billion2 and dozens of business lines, most small caps live in anonymity during their early growth years and often focus on just one or two primary businesses.  While everyone has heard of Apple, Amazon, and Boeing, fewer can name more than a handful of public small cap companies.  Obscurity can have its advantages, especially for skilled investors looking to drive incremental return. 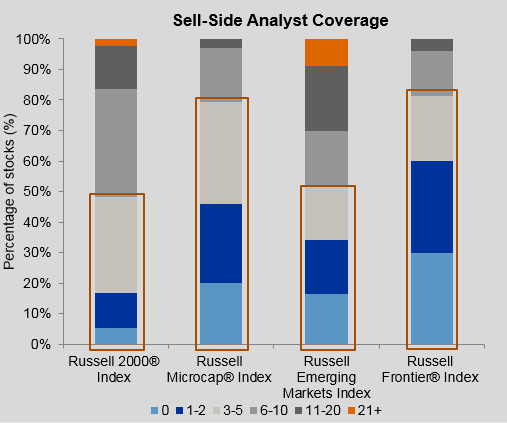 Russell® is a trademark of Frank Russell Company (FRC). No further distribution of Russell Data is permitted without FRC’s express written consent. FRC does not promote, sponsor or endorse the content of this communication.

In addition to the lack of general public awareness, small caps are also relatively underfollowed by the investment industry, particularly as measured by sell side analyst coverage.  In fact, US small cap stocks have roughly the same level of sell-side analyst coverage as stocks in the emerging markets.  If you look down the market capitalization range even further to “micro cap” stocks3, the coverage is even more sparse and comparable to frontier markets equities.  This means that micro and small cap stocks tend to be less well understood. This typically increases the chances that their stock prices will divert from fair value and, thus, provide an opportunity for skilled investors to exploit.

Aside from anonymity, two other primary factors contribute to the heightened opportunity for skilled investors to add value in the asset class: large breadth of individual companies to pick from and greater price volatility of individual stocks. These attributes of small caps give greater and more frequent opportunities to buy stocks at a discount to their fair value.

What to look for in selecting an active small cap manager

Russell Investments believes investors can benefit from investing actively in US small cap stocks, but how and where investors allocate their capital matters. Since 1976, we’ve been scouring the US small cap universe looking for the best investment managers who do the work that sell-side analysts don’t – diving into the details of each company, talking directly with each CEO and CFO, and developing an informed and independent view of company prospects.  While the value that savvy active managers can provide is appealing, investors should note the potential perils of the asset class, such as higher volatility and lower liquidity.  So, it is important to be picky.

We have long recognized the benefits of investing with early-lifecycle managers4 in capacity-constrained asset classes, such as small caps.  Our research continues to show that early-lifecycle managers tend to generate higher excess returns than their more mature peers.5 This is primarily driven by three factors: motivation, agility and opportunity set.

Investors who follow the typical industry practice of waiting for a three-to-five-year track record are often too late. Russell Investments’ US small cap team prefers to invest while motivation is high, assets are low, and a manager's primary focus is generating strong returns for investors.

At Russell Investments, our research has found that US small cap offers one of the highest return opportunities of any asset class.   This makes it an important allocation in multi-asset portfolios. The lack of information, broad opportunity set, and rapidly evolving small cap market offer the exact conditions where, if selected and monitored appropriately, talented active managers can thrive.

1This is the range in the 2016 FTSE Russell reconstitution of the small cap oriented Russell 2000® Index.
2As of June 15, 2016.
3The current definition of a micro cap stock is a company with a market capitalization of $30 to $863 million as defined by the 2016 FTSE Russell reconstitution of the Russell Microcap® Index.
4“The Evolution of the Investment Process” (Paul Greenwood, 1999); “The Perils of Success” (Jon Christopherson, Zhuanxin Ding, Paul Greenwood, 2001); “Start small, stay small: Making the most of U.S. small cap equities” (Jon Eggins, Damien Amato, 2013)
5Of course, not all early-lifecycle managers excel in the first few years. Furthermore, mature managers who conservatively manage capacity can continue to produce superior excess returns. Russell Investments' manager research process carefully vets the individual merits of each manager. Identifying skill is always the highest priority of Russell's manager research effort, but we are sensitive to the negative impact of higher asset levels.

The information, analyses and opinions set forth herein are intended to serve as general information only and should not be relied upon by any individual or entity as advice or recommendations specific to that individual entity. Anyone using this material should consult with their own attorney, accountant, financial or tax adviser or consultants on whom they rely for investment advice specific to their own circumstances.

The Russell Microcap Index measures the performance of the microcap segment of the U.S. equity market. It makes up less than 3% of the U.S. equity market. It includes 1000 of the smallest securities in the small-cap Russell 2000® Index based on a combination of their market cap and current index membership and it includes the next 1,000 securities.

Russell Emerging Markets Index: Measures the performance of the investable securities in emerging countries globally. Constructed to provide a comprehensive and unbiased barometer for this market segment and is completely reconstituted annually to accurately reflect the changes in the market over time.

The FTSE Frontier Index Series provides a comprehensive and transparent series of benchmarks for the performance of large, mid and small cap equity securities from eligible Frontier markets in Europe, Americas, Asia-Pacific, Africa and the Middle East.