Russell Investments experts discuss the implications of the U.S. dollar’s rapid rise for other currencies and economies and how investors may take advantage of these key trends.

Did the U.S. dollar fly too high? See what that could mean for investors 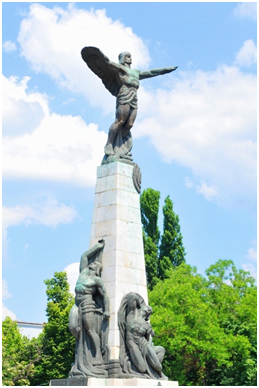 The U.S. dollar has been flying high since 2012. Strengthened by the robust U.S. economy, the dollar experienced its most rapid rise in 40 years, even as many other parts of the world continued to struggle. Yet like Icarus, who flew too close to the sun with his wax-and-feather wings, the dollar couldn’t sustain its upward flight forever.

The dollar’s ascent slowed significantly toward the end of 2015, and we expect to see it peak in 2016. That isn’t necessarily bad news. The end of the dollar’s long-running bull market could represent a win for emerging market currencies and create new potential opportunities for investors and portfolio managers.

To learn more about how the dollar is likely to perform over the next year, what that means for other currencies, and how investors can take advantage of these trends, we spoke to Van Luu, head of currency and fixed-income strategy, and Keith Brakebill, senior portfolio manager at Russell Investments.

Q: What is Russell Investments’ current outlook for the U.S. dollar?

Van: The dollar moved from a strong upward trend to a broad sideways range near the end of 2015. In our view, the dollar is currently at the weaker end of that range. It may continue to strengthen a bit short-term, but it’s unlikely to hit new peaks on the U.S. Dollar Index. On the other hand, we don’t expect to see a structurally weak dollar, either.

This current outlook is a shift from what we anticipated just a few months ago. At the beginning of the year, we thought the Federal Reserve would raise rates four times in 2016. The financial markets were quite skittish in January, and the data was a little weaker than expected. Now, we’re looking at perhaps one rate hike this year. That’s why we see less potential for the dollar to continue its rise.

Q: Is that trend likely to continue through the rest of 2016 or beyond?

Van: Yes, we think so. With the exception of the yen, which has already strengthened significantly, the movement of other major currencies is consistent with this view. And although the dollar is not being supported by a significant number of rate increases this year, the other major currencies aren’t getting help, either. The Bank of Japan has started using negative interest rates, and the European Central Bank has moved interest rates further into negative territory. So there’s no reason to expect other currencies to embark on a major strengthening trend against the dollar in the near future.

Over a 12-month horizon, we are currently neutral on all major currencies against the dollar, with the exception of the pound sterling. The pound is the only currency we are still negative on, relative to the U.S. dollar. We expect the pound to depreciate from current levels.

Q: What does that mean for investors?

Keith: From a portfolio management perspective, the time for concentrated long-dollar positions like we had in 2014 and 2015 is coming to an end. Our long-dollar positions will potentially be much smaller now, and much more tactical. We’re looking at other ways for investors to add the value of currency rather than just a dollar call against the rest of the world. When you’re making a U.S. dollar call now, it needs to be more nuanced than simply long on the dollar and short on anything else. It will matter which currencies are on the other side of your position—much more so now.

Q: Even with the dollar in a neutral position against most major currencies, are there issues with any of those currencies that investors should keep in mind?

Van: Well, there are divergent views about the yen at the moment. We were constructive on the yen from mid-January. The yen strengthened during the first half of the year, still looked relatively undervalued, and was gaining momentum against other currencies. Even the Bank of Japan using negative interest rates didn’t prevent the yen from strengthening in the first half of 2016.

Yet many observers are predicting a significant weakening of the yen, because the Bank of Japan and Japanese policymakers have become extremely expansionary in their policies. Some are even talking about using helicopter money—the metaphor Milton Friedman coined to describe monetary policies equivalent to dropping money from a helicopter to stimulate the economy and increase inflation. The view among those people is that the yen could fall again, and that it’s time to try helicopter money, because conventional measures have failed to stimulate the Japanese economy.

I personally don’t subscribe to that view. I don’t believe the situation is bad enough for policymakers to resort to such extreme measures.

Keith: The yen was one of our preferred long positions in the latter part of 2015 for the reasons that Van just highlighted as well as for its diversification properties and its ability to mitigate other risks in the portfolio. So we tend to maintain long yen positions, yet even when we are bullish on the yen we’re unlikely to be as concentrated as we have been in the U.S. dollar due to the possibility of helicopter money or monetization of the debt.

I agree with Van that the stress would need to be much greater for Japan to go down that relatively extreme path, but that is the ultimate end game. I just don’t think we’re there yet, so we’re comfortable with the long yen position as it stands today. We just don’t want to get too concentrated, because we can’t know for certain what policymakers will do.

Van: Keith makes a good point about diversification. Currently, the yen is what we consider a safe haven or a defensive currency. It usually rises when risky assets are falling.

Q: Does the current position of the dollar and the relative stability of other major currencies create any opportunities or potential barriers for emerging market currencies?

Van: Two main risk factors have been hanging over emerging markets for the last six to nine months: One is China, and the other is the possibility of the Fed raising rates very rapidly. The latter threat has receded quite a bit, which significantly decreases the risk for emerging market currencies.

The markets were also worried that there might be a disorderly slowdown in the Chinese economy. Many emerging markets are quite dependent on trade with China, especially in terms of commodities. Some major emerging market economies, such as Brazil and Russia, export a lot of raw materials to China. So as China moves from an investment-led, high-growth economy to much slower growth one, that could have negative effects for other economies. On the plus side, we’re seeing signs that China’s transition is not as disorderly as previously feared, at least for the time being, and that brightens the picture for other emerging market currencies.

There was also concern about capital outflows from China. Chinese residents were moving money overseas, and that was a big concern for the market as well, but China seems to have that situation under control now. Developments in China remain a risk though.

Bad news, or the potential for bad news, is often priced into emerging market currencies in anticipation of worsening scenarios. So if what you may actually end up with is a stable market that should lead to rallies for a number of emerging currencies. We think that emerging markets offer a strong upside, even with a less-than-positive short-term outlook, because the reality may be slightly better than the bad expectations that are currently priced in.

Q: Are there any factors in play that could alter the current outlook for the dollar?

Keith: If inflation accelerates in the United States—we do expect inflation to pick up through the second and third quarter of this year—and if the Fed remains on the sidelines, unwilling to act in the face of rising inflation, that could result in a stronger reversal of the dollar and a reversion to value among major currencies. I worry about that.

Van: That makes sense. If inflation accelerates and the Fed is behind the curve, we could well see depreciation in the dollar and not just a continuation of the same positions we’re seeing now.

In addition, commodity-related currencies like the Canadian dollar and the Australian dollar have been very strong recently, because of the recovery in commodity prices. If that recovery doesn’t last, there may be some downside risk for those currencies.

Q: How does currency fit into a multi-asset approach to investing?

Keith: You can’t ignore the impacts of currency in multi-asset investing—and it’s worthy of strong consideration as investors think about the kind of hedging they may want to do in a portfolio.

Van: Hedging is important when it comes to multi-asset investments. Many of our multi-asset portfolio managers have been, and still are bullish on the European stock market and relatively bearish on the U.S. stock market. You can take that view, but you must not ignore the currency dimension. In 2015, it would have been very beneficial to hedge any exposure to European equity. Hedging your exposure may be less urgent now because of the sideways movement we’re currently seeing, but currency continues to be an important aspect of multi-asset investing.

The information, analyses and opinions set forth herein are intended to serve as general information only and should not be relied upon by any individual or entity as advice or recommendations specific to that individual entity. Anyone using this material should consult with their own attorney, accountant, financial or tax adviser or consultants on whom they rely for investment advice specific to their own circumstances. This material is not an offer, solicitation or recommendation to purchase any security.

Diversification does not assure a profit and does not protect against loss in declining markets.

Weekly market update on global investment news in a quick five-minute video interview with some of our top investment professionals.