With less than a year to go until the United Kingdom leaves the European Union, we think that negotiations are heading toward a soft Brexit. The guiding principles behind our focus are simply Prime Minister Theresa May’s constraints and preferences.

Since the Brexit referendum on June 23, 2016, we have been analyzing the ensuing negotiations from a perspective that can be summarized into the following two sentences:

Time and time again, we have listened to Prime Minister May listing her preferences in animated speeches only to find out they did not really matter and were quickly abandoned on contact with EU negotiators. In fact, May’s famous red lines (that could not be crossed in pursuit of “a truly global Britain”), have become blurrier and blurrier. Their content and remorseless logic is neatly summarized by the EU’s Chief negotiator Michel Barnier in the chart below. 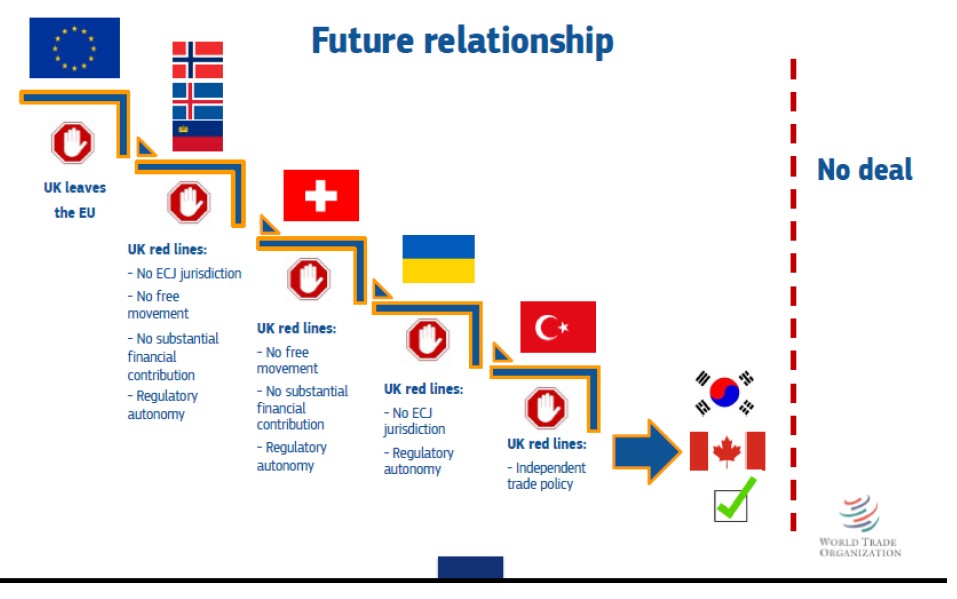 The first constraint is the economic fallout of a hard Brexit. The UK government’s own analysis, summarized in the chart below, reveals how much economic growth would be lost under different Brexit outcomes. Both a no deal and free trade deal outcome would cause significant economic hardship, especially in regions that are already economically vulnerable. In our opinion, this is not politically acceptable and thereby puts a constraint on the UK government. 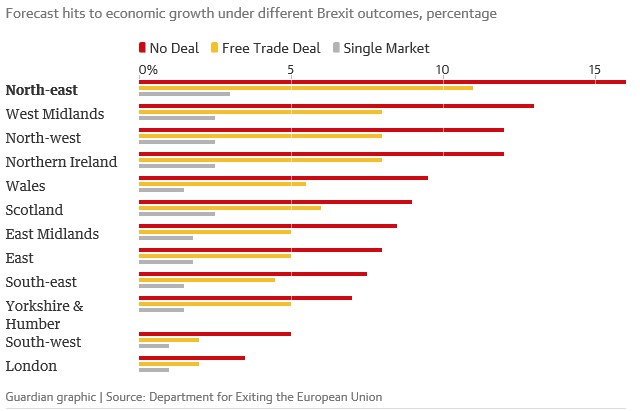 The second constraint is the need to avoid widescale trade disruption and maintain international supply chains. Currently, the UK is almost perfectly integrated into the EU’s economy and it is by far its largest trading partner. In 2016, 43% of UK exports went to the EU while 54% of the UK’s imports came from the EU (see chart below). Big disruptions in those trade flows would have serious repercussions, especially in an age of Just In Time inventory management. Pressure from domestic and international companies to prevent trade disruption is a serious constraint on the UK government and points towards the need for a new customs union agreement with the EU. 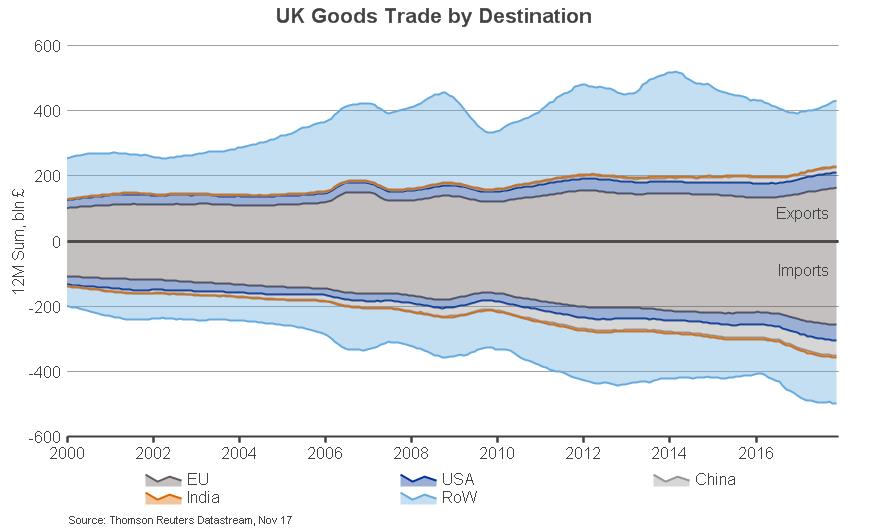 The third constraint comes in the form of the need for regulatory alignment with the EU. This constraint is really all about preserving the UK’s ability to sell services to the EU, something a new customs agreement or free trade agreement would not cover. The importance of this constraint derives from the fact that 70% of the UK’s exports are services and contrary to its goods balance it enjoys a large trade surplus in this area (see chart below). Now, regulatory alignment can come in all shapes and sizes, giving both sides of the negotiation plenty of scope to come to an agreement. However, that does not change the fact that it requires a Brexit outcome that is softer than a Canada-style free trade agreement. 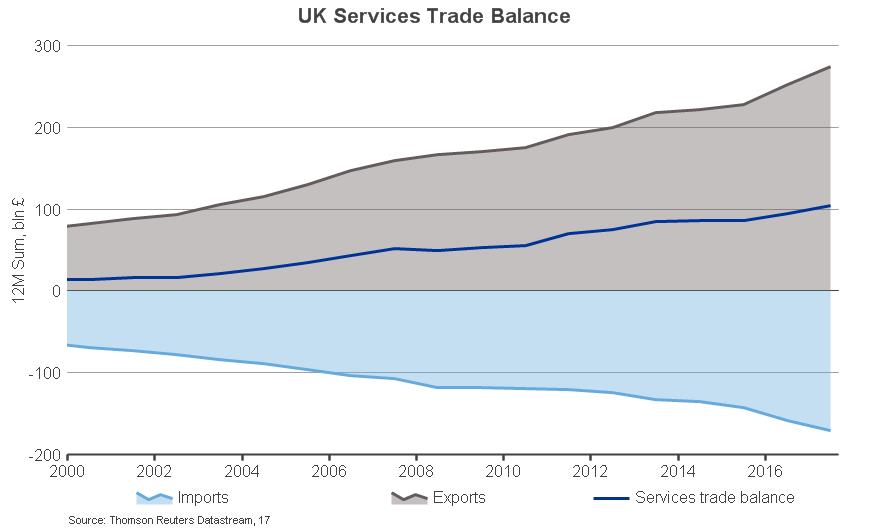 The fourth constraint is currently probably the most important one, and it is the need to protect the Good Friday Accord. The promise of a clean exit from the EU Customs Union is incompatible with the guarantee to avoid a hard border in Ireland. This is a very serious constraint because no one wants to risk breaking the Good Friday Accord and see a return of violent conflict in Ireland. But at the same time, Prime Minister May’s majority depends on the Democratic Unionist Party, which does not want to see any separation between the UK and Northern Ireland. So far, dealing with this issue has been delayed, but sooner or later a choice needs to be made. Maybe Northern Ireland in effect stays in the single market, as proposed by the EU, but we think it is more likely this constraint pushes the UK government into negotiating a new customs agreement with the EU.

Finally, the fifth constraint is a deepening realization that the political arithmetic in the House of Commons is pushing toward a soft Brexit. With the Labour party now actively supporting negotiating a new customs agreement with the EU, it will likely only take a couple of handfuls of Tories to pass amendments asking the government to do just that. Although not binding, the political pressure would build and other legislative defeats would loom. This political reckoning might not happen until after the exit agreement is finished, but in the transition period afterwards we expect that all bets will be off.

As we stated at the beginning, we think the constraints laid out above are pushing the UK toward a soft Brexit. In fact, looking ahead, we believe the UK will eventually realize that a new customs agreement with the EU is unavoidable. That is the final shoe to drop. We don’t believe the UK will opt for the real pain of a limited new free trade agreement in exchange for the nebulous potential of new trade agreements with old friends and new allies outside Europe. Instead, it will likely choose to move a step up the ladder from a Canada-like outcome to a Turkey-like outcome (or maybe even in between Turkey and Ukraine).