On that latter and more important note, the Fed meeting was hawkish today. The dot plot of Federal Open Market Committee (FOMC) participant views showed an expectation for seven total rate hikes this year. Taken literally, that would imply a 25-basis-point hike at every single meeting that remains on the calendar for 2022. Furthermore, a chunky minority on the FOMC—seven of the 16 participants—favored hiking rates even faster than that. Finally, the dot plot suggests the Fed will start to take the punchbowl away in 2023, with policy rates moving into restrictive territory by year end.

Markets initially reacted negatively. Bonds sold off, with the 10-year U.S. Treasury yield rising to 2.25% in the minutes around the announcement. The S&P 500 Index—which was trading up almost 2% before the meeting—gave up ground before recovering again later in the afternoon.

The war in Ukraine was flagged as a major source of uncertainty for the outlook, directionally adding to inflation and weighing on economic growth. We agree, with those headwinds likely to be smaller in the United States than in Europe. Thankfully, one of the main risk channels by which the conflict could challenge the global cycle—higher energy prices—has come down sharply in recent days. For context, West Texas Intermediate crude oil was trading at around $92 per barrel before the invasion began on Feb. 24. It peaked at almost $125 per barrel on March 8, and has subsequently come back down to $95 per barrel today. 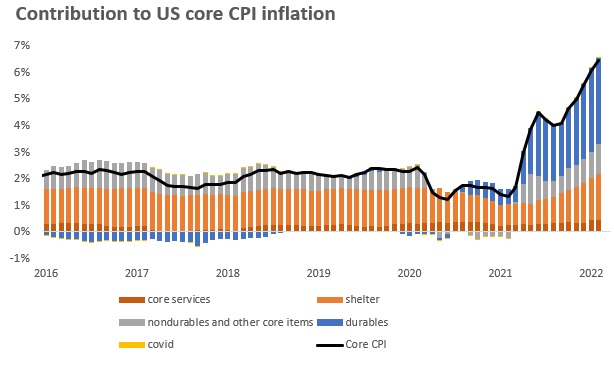