Ignore currency exposures at your peril

Investing overseas creates currency exposures which are often coincidental rather than the outcome of deliberate decisions. Leaving currency exposures unmanaged has significantly reduced the returns of U.S. investors from international investments in the last two years. In this blog, we explore how currency exposures can be managed to lower risk or enhance return.

When U.S. investors make allocations to international assets, they are inevitably exposed to exchange rate fluctuations. For example, a U.S. investor who buys an international developed-market ex-U.S. equity index implicitly has a long position in a basket of currencies consisting of roughly 27% euro, 19% Japanese yen, 14% pound sterling, 12% Canadian dollar and other currencies.1 That currency exposure can have a large impact on realized returns to the US investor. Between the start of 2017 and the end of April 2022—a period of U.S. dollar strength—the currency-hedged MSCI ex USA index outperformed the unhedged version by 12.5%.

Currency hedging using forward exchange contracts is a good way of reducing the unrewarded risk from currency. By selling an appropriate amount of foreign currencies forward, hedging creates positions that move in the opposite direction to the currency exposures in the underlying portfolio. In a static currency hedging program, a constant percentage of the foreign currency exposure is hedged, for example, 50% or 100%.

Another way of quantifying the risk reduction benefit from currency hedging is to look at drawdowns. Again, the figures for the global bond ex-U.S. portfolio look compelling. Full currency-hedging would have reduced the maximum drawdown by $15 million on a $100 million portfolio compared to no currency hedging. For the developed-market equity ex-U.S. portfolio, the decrease in maximum drawdown is about $7 million on a $100 million portfolio. While these historical outcomes are specific to the sample period studied, we believe that the risk reduction conclusion will directionally hold in the future. This is because the U.S. dollar is a so-called safe-haven currency which goes up when risky assets such as equities slump. Currency hedging is risk-reducing for the U.S. investor because it increases exposure to a safe-haven asset.

Importantly, as the Fed raises interest rates more quickly than other major central banks, U.S. investors pick up a positive yield from hedging many other developed currencies given the relative level of interest rates (see Figure 1). 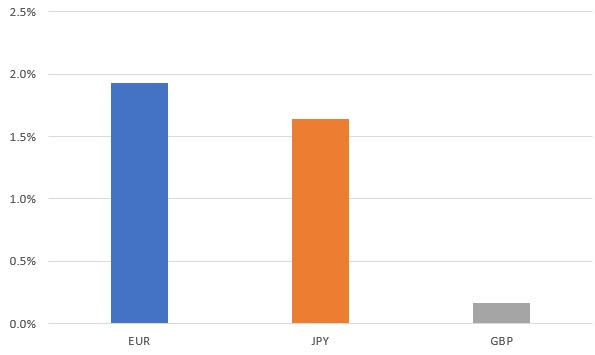 The timing for initiating a U.S. dollar currency hedge may seem somewhat unfavorable, given the recent strength of the U.S. dollar. Since the second half of 2020, the U.S. dollar (as measured by the DXY index) has risen from below 90 to above 103 (see Figure 2). The reasons for the dollar rally are well known: a widening interest rate differential to the euro and the Japanese yen, as well as the energy independence of the United States in the face of rising oil prices. These reasons are possibly already priced in.
Figure 2: DXY US Dollar Index. Source: Bloomberg, as of April 30, 2022.
Click image to enlarge 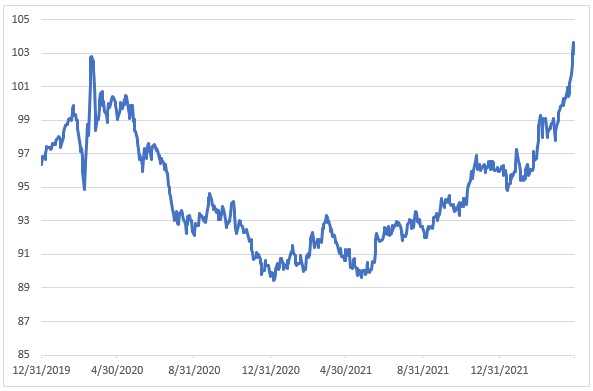 Whether the dollar bull market continues or not, investors can lessen the timing risk by phasing in their currency hedging program, either through a calendar-based approach and/or valuation triggers that raise the currency hedge ratio as the U.S. dollar falls to more attractive levels. From a strategic perspective, hedging back to their home currency could be very desirable for U.S. investors: they reduce the risk that currency fluctuations substantially detract from their international asset returns. What’s more, the U.S. dollar often rises when risk assets such as equities fall. Hedging back to their home currency (effectively selling foreign currencies and buying the dollar) enables U.S. investors to tap into the safe-haven nature of the greenback and improve portfolio diversification.

Finding the optimal hedge ratio and the right time to initiate that static hedge is difficult. A different approach is to allow the currency hedge ratio to always be flexible over time, with the aim of generating excess returns over a passive hedge. Hedge ratios can be adjusted to currency valuations, interest rates and other factors that drive currency returns. This dynamic currency hedging approach can turn the incidental currency risk from international assets into a return source. Investors could improve the risk-return outcomes of their portfolios, relative to implementing a static hedging policy or not hedging at all.

Alternatively, some investors also employ absolute return currency strategies where long-short foreign exchange positions are agnostic of the currency exposures in their underlying portfolios. We believe that commonly used factors such as carry, value and trend can capture returns in foreign exchange markets. We find that Japanese investors, who are used to earning very low returns from their fixed income investment, have shown an interest in absolute return currency for some years. As yields in the United States have risen and fixed income returns suffered, U.S. investors could also turn their attention to currency.

When investors start thinking about post-pandemic asset allocations, consideration should be given to the management of currency exposures. As the U.S. dollar has rallied sharply since the end of 2020, leaving foreign currency exposure from international stock and bond investments unhedged has been detrimental to U.S. investors over that period. We believe investors should assess their options in currency management, be that phasing in a static hedge program, dynamic currency hedging or absolute return currency. The only course of action we do not believe is appropriate is to ignore currency exposure.

Ultimately, your portfolios may be exposed to more risks than ever before. How do you mitigate these risks? Who do you turn to? We have the experience and deep capability set to help you manage your exposures and to help you navigate the challenging road ahead. Let us know how we can help.