The bottom line: Many investors have seen first-hand how difficult 2022 has been, but it can be useful to drill into specific economic and market indicators to better understand what is happening.

2022 has been a challenging year for U.S. investors, with both bonds and equities down double digits year-to-date. Amid the difficult market environment, it’s more important than ever to keep abreast of macroeconomic developments. While our team at Russell Investments monitors a broad array of macroeconomic and market indicators, we believe that our Economic Indicators Dashboard provides a pithy summary of some of the key indicators that investors are likely to hear being discussed in the news. In this report, we’ll unpack three key takeaways from the U.S. Economic Indicators Dashboard. 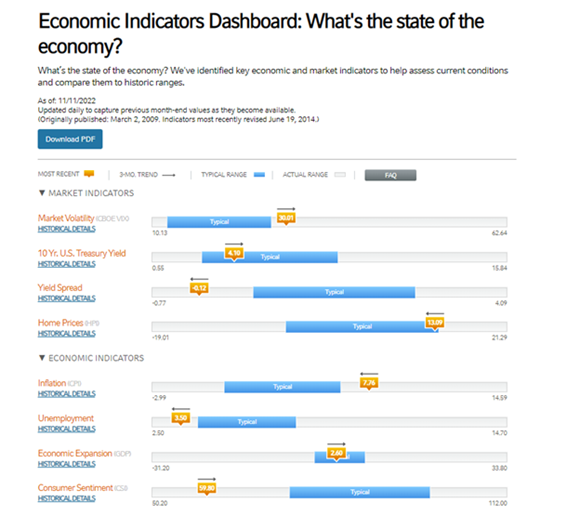 Theme 1: We are probably not yet in a recession

Although politicians and pundits might try to characterize the U.S. economy as being a recession, we do not believe that a recession has arrived yet in the U.S. While it’s true that we had two consecutive quarters of negative GDP (gross domestic product) growth in the first half of 2022, that by itself is not sufficient for a true recession to be declared. In the U.S., an advisory group called the National Bureau of Economic Research (NBER) is responsible for identifying recessions.

If you want to know why the NBER might be hesitating about labelling the current economic environment as recessionary, just take a look at the labor market. The unemployment rate in the U.S. has been hovering between 3.5% and 3.7% recently, which is among the lowest unemployment rates in history. 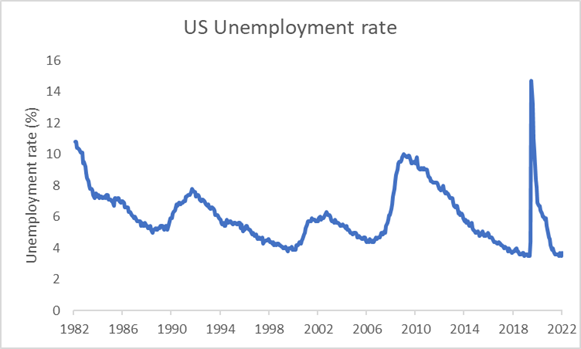 In addition, the negative GDP growth appears to have been short-lived. The US Bureau of Economic Analysis’ advance GDP estimate showed that GDP growth returned to positive territory in the third quarter of 2022, with the U.S. economy growing at an annualized 2.6% rate.

Theme 2: But a mild recession might be in store in the next 12 months

So now that we’ve shared the good news, it’s time to share the more disappointing news. Although a U.S. recession is still not inevitable, we now believe that a mild recession in the U.S. in the next 12 months is the most likely scenario.

Consumers have been feeling the pinch this year. Even though the October CPI print was softer than expected, inflation still remains a significant challenge in the U.S. With headline CPI (consumer price index) inflation rates still hovering at around 7.8% year-over-year, consumers have seen their real (inflation-adjusted) wage growth slip into negative territory. Given the weakness in real wages, consumers may try to borrow money to fund their spending. And it’s true that consumer balance sheets are still somewhat healthy for now, giving consumers some flexibility to borrow more. But we know that there’s a limit to what consumers can borrow, and eventually, the weakness in consumers’ real wages will likely force them to reduce their spending, hurting the engine of economic growth.

In addition to the headwinds from poor wage growth, low consumer sentiment can also create a drag on consumption. The University of Michigan consumer sentiment measure stood just shy of 60 in October (59.8 preliminary, 59.9 final). Although consumer sentiment has rebounded from earlier in the year, it nevertheless remains relatively low. Anxiety over a potential economic slowdown as well as the sting from inflation have contributed to the depressed consumer mood. 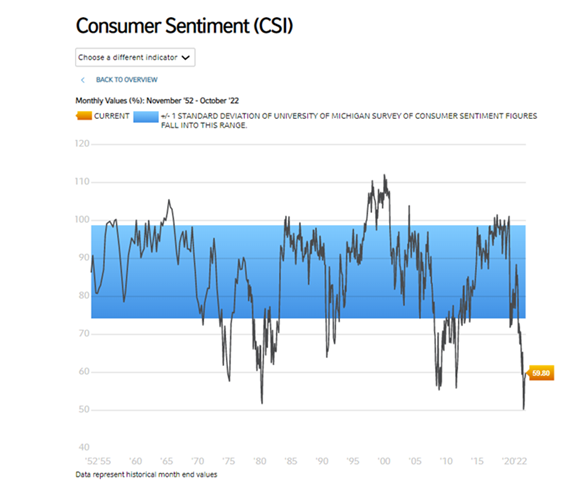 If the consumer mood continues to become bleaker, it could lead to consumers pulling back their spending in the future, which would be detrimental to economic growth.

In some ways, we are already seeing consumer spending being impacted. According to the Bureau of Economic Analysis, personal consumption expenditures contributed just under one percentage point annualized U.S. GDP growth in the third quarter of 2022. That’s far short of the 2.27 percentage points that personal consumption expenditures contributed to annualized GDP growth in the third quarter of 2019—before the COVID pandemic roiled the world.

Moreover, purchasing manager index (PMI) values have already fallen into contractionary territory. The PMI data is a key leading indicator and suggests likely softening of the U.S. economy to come. With the passage of time, the softening economic data will likely eventually show up in lagging indicators like the unemployment rate, too.

Finally, financial markets have already started to price in some level of recession risk. Some of the popular yield curve measures (10-year minus 2-year spread, 10-year minus 3-month spread) are inverted, signaling that markets anticipate interest rates will likely fall at some point, notwithstanding the current hawkish Fed. Falling interest rates generally coincide with recessionary periods, as the Fed will likely need to cut interest rates during recessions to provide support to the economy.

For these reasons, we think that a recession in the U.S. within the next 12 months is more likely than not as the Fed continues to tighten its monetary policy stance. But the combination of relatively low consumer debt service ratios, along with stringent loan underwriting standards, should help limit the depth of any potential recession.

Theme # 3: A volatile and uncertain year

Given all the macroeconomic challenges, it should not be a surprise that 2022 has been riddled with bouts of market volatility. At the start of November, for instance, we saw the S&P 500 Index rally by about 1% in the immediate aftermath of the Fed statement release. But when the press conference wrapped up and markets closed, the S&P 500 ended the day down more than 2%. 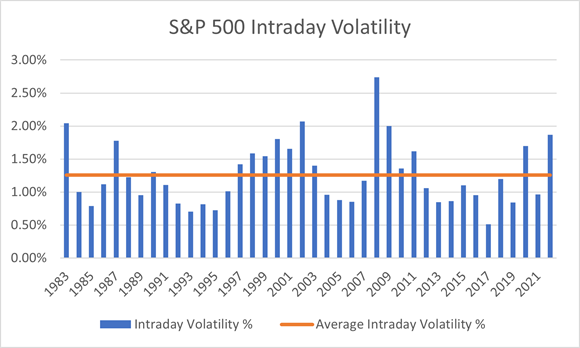 Against this backdrop, investors may wonder why the VIX measure on the Economic Indicators Dashboard appears only slightly above the typical range. The VIX is not a measure of actual market volatility, but rather a mathematically derived formula of implied volatility based on option pricing. Implied and actual measures of market volatility do not always align one-to-one.

Another contributing factor is that the VIX itself can be volatile, with readings fluctuating noticeably from day to day. In fact, the VIX was just less than 24 as of Nov. 14, 2022  compared to the 30.81 reading we saw in late October.

To help put things into better perspective, let’s take a look at how many days in each year the VIX has spiked above 30. As you can see from the chart below, the VIX typically has an above-30 reading for around 22-23 trading days each year. And in some years, the VIX never spikes above 30 at all. But in 2022, we’ve already seen the VIX cross above that 30 threshold nearly 50 days this year, and the year still hasn’t finished yet. So it’s fair to say that 2022 has been a noticeably volatile year. 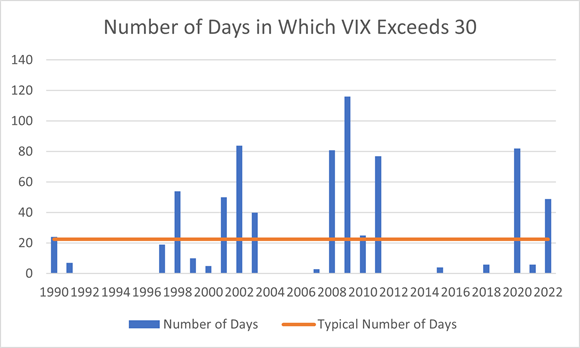 The market volatility has been one of the contributing factors to investor pessimism. Our Composite Contrarian Indicator, which tracks investor sentiment, is still showing that investors are somewhat nervous, even as the indicator has pulled back from the panicked extremes we saw earlier in the year. 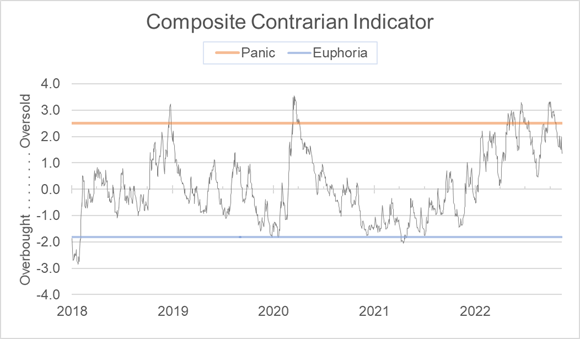 Source: Russell Investments’ proprietary indicator which considers a mix of technical, positioning, and survey-based measures of investor sentiment. Data as of Nov 14, 2022.

Overall, 2022 has been a challenging and newsworthy year. As the year comes to an end, investors should think about what the future may bring. Stay tuned for our Global Market Outlook in which we preview expected trends in 2023.