Overall, we think the risks around Chinese debt for investors are a bit overblown. Why? One key reason is that a large amount of Chinese corporate debt comes from banks (not the bond market). Within this bank debt, more than half is from a state-owned lender to a state-owned enterprise.3 This provides the Chinese government greater oversight - and greater control - over leverage in the economy. 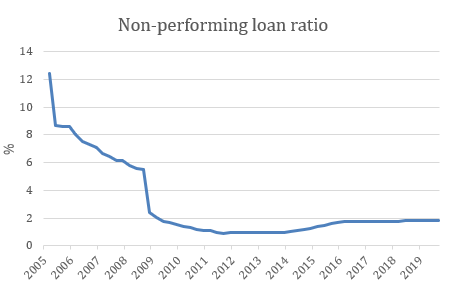 Furthermore, the Chinese government has made deleveraging one of its key policy goals, while also maintaining steady growth rates (with a goal of doubling GDP per capita between 2010 and 2020. The recent cases of default show that the People’s Bank of China (the PBoC) is, in our opinion, willing to allow some failures in the corporate space to accelerate the maturing of the financial system. This can also be seen with the development of a bankruptcy system - something that previously was absent.4

Another reason why we think concerns over debt levels are overblown in the short-term is the decline of interest rates in China. The PBoC has been explicitly cutting rates, along with carrying out some reforms to the way interest rates are set. In addition, the PBoC has also introduced more competition to the banking sector - including penalties for price cartel behaviour - which will reduce interest rates that borrowers are subjected to.

One final question that remains unanswered, in our opinion, is how hard the Chinese government will push on deleveraging - and the time-frame with which they will approach it. A renewal of the country’s prosperity-focused goal of doubling GDP per capita would hint that the government is taking a steady approach to deleveraging. On the other hand, any indication from Chinese leaders that this goal has been achieved - with no extension needed - might indicate a risk that deleveraging efforts are likely to step up a notch.