Earlier this spring, corporate credit1 was trading at extreme levels only seen during two or three brief periods in the last 30 years. At the time, we believed it was an excellent opportunity to buy credit assets at historically cheap levels, and while we could not predict where the market would bottom out, we could be highly confident that the result would be positive for performance over a horizon of a year or more.

In the last couple months, the market has come storming back faster than any of us could have predicted. In mid-June, U.S. high-yield corporate spreads sit at nearly the same level as when the U.S. had its first known COVID-19 death on Feb. 28.2 That level is essentially the same as the historical average for the sector over the past 20 years, which begs a rather obvious question. Credit was the place to invest for right now … two months ago. But, is that still true now and into the future?

The short answer is yes. Eye-popping double-digit bond returns may no longer be on offer, but credit remains an attractive investment for the foreseeable future. Why? Well, there are a few reasons credit can be attractive at only average spread levels normally—and particularly so in the current market.

With government bonds near all-time lows, there’s no alternative

First, is the classic TINA argument. Investors, especially retirees, love income. And with U.S. Treasuries (and in Canada, government bonds) still at or near record lows, there is no alternative (TINA) to credit for generating meaningful income. Sure, we can quibble over the various flavors of credit and which is slightly more or less attractive, but the corporate market remains the most liquid and first stop for most investors reaching for yield in their portfolios. Until more juice is squeezed out of that market, many investors are going to see little reason to venture into more esoteric sectors with less policy support from the U.S. Federal Reserve or the Bank of Canada.

Source: Based on Bloomberg index data as of June 10, 2020.
Indexes are unmanaged and cannot be invested in directly. Past performance is not indicative of future results.

Next, we should think about why the credit cycle is called a cycle in the first place. It ebbs and flows like the tides. Typically, when it goes through the average heading up, it keeps right on going to a peak, as we saw in March. When it comes back through the average on the way down, it grinds lower for quite some time, clipping a coupon and additional excess returns over government bonds along the way. So, while the valuation may be the same, the cyclical outlook for credit risk is very different depending on whether the average is being approached from below or, as is the case today, from above. 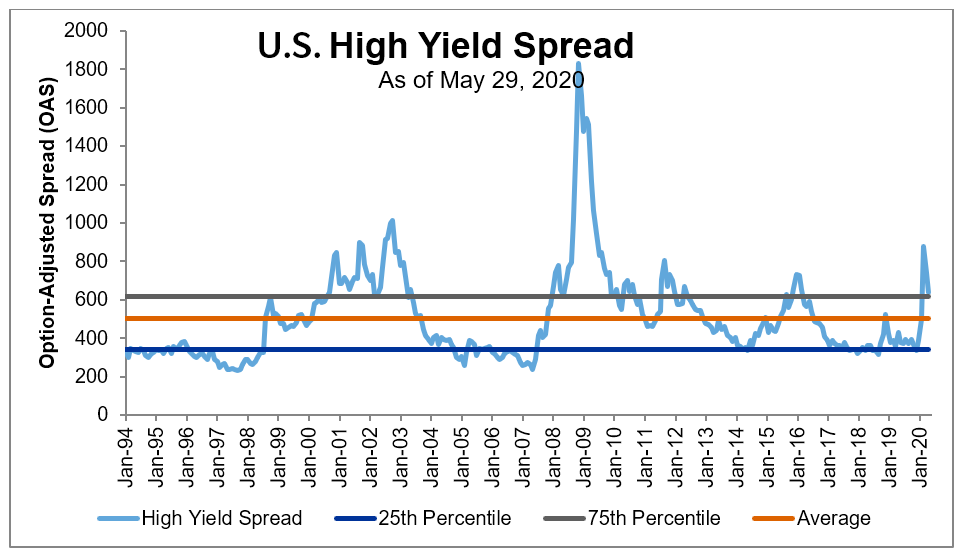 Lastly, at average spreads investors are more than compensated for most plausible future levels of defaults. The nature of a risk premium3 like the credit spread is that it not only compensates you for the risk that bad things will happen (defaults), but also for the uncertainty about which companies that bad thing will happen to. That latter component is rather big for each individual bond. Thankfully, we have that most magical of forces known as diversification to help us out!

1 Debt issued by corporations.
2 The spread of the Bloomberg U.S. High Yield Index on that date was 500 basis points versus 536 basis points on 6/8/2020. Note also that subsequent post-mortem analysis has found earlier deaths in the U.S. due to COVID-19 that were not known at the time.
3  Risk premium is the return above the risk-free rate that an investment is expected to yield. Government bonds are generally considered risk-free assets as they are backed by the government treasury. Bonds from corporations, which have a different credit rating than the government, generally offer a risk premium.