The Bank of England (BoE) has bitten the bullet and hiked the base rate from 0.25% to 0.5%, but in a dovish turn also provided forward guidance that outlines a very gradual path for future hikes. This was a close call with compelling arguments in favour and against. We are in the against camp and looking ahead we expect the BoE will have to stand down. A one and done rate hike against such a dovish forward guidance background will only briefly impact markets, pushing down gilt yields and the pound and supporting equities.

Arguments in favour of the rise

The arguments in favour of the rate hike start with the rise in inflation to 3% year-on-year. This is putting pressure on the BoE to tighten monetary policy. However, because the rise in inflation is mainly caused by a fall in the pound it is not the main reason. After all, the inflationary impact of a lower pound is transitory and will slowly dissipate in 2018. More important for the BoE is the tight labour market. The unemployment rate is at its lowest level since 1975 and the BoE worries this will drive future wage growth up. Finally, economic growth in the UK has held up better than expected since the Brexit vote. This undermines the case behind the BoE’s emergency measures, including its rate cut at the time. 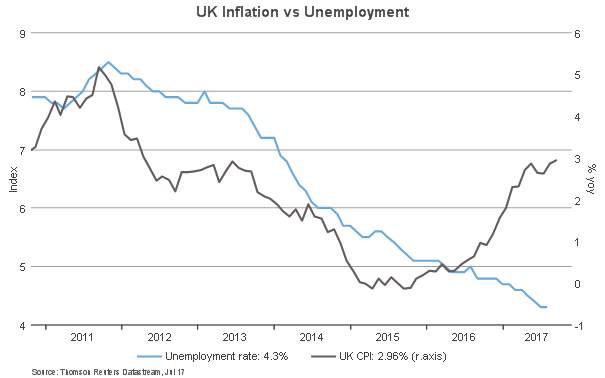 Although the arguments in favour are compelling, we are of the opinion that the arguments against are more so. As stated before, concerns around inflation need to be tempered considering the transitory impact of a weaker pound. And although wage growth might indeed pick up in the future, as of late it has been rather sluggish. In fact, in real terms wage growth has dipped into negative territory, putting pressure on UK consumers. And because the consumer has been the engine of economic growth since the Brexit vote it follows that risks to the economy are tilted to the downside. In an environment where economic growth is already slowing down notably and the important housing market is wobbly, we disagree with the BoE decision to add to those risks.

But risks are not just emanating from the UK consumer and housing. Political risk is also on the rise. The Brexit negotiations are not going well and Prime Minister May’s position is rather weak. The uncertainty this brings is weighing on producer confidence and will deepen the economic slowdown.

Given these circumstances, we expect the BoE will stand down over the next twelve months and leave interest rates unchanged. In fact, the BoE itself has already indicated as much in its very dovish forward guidance. And because this dovish surprise is more market relevant the reaction today has been one of lower Gilt yields, a lower pound and rising equities. We don’t expect these moves to last long, and in case they do, we will use as a trading opportunity in the opposite direction in our funds. 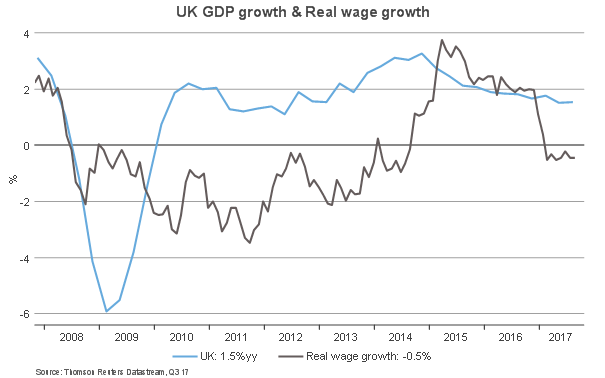 Spotlight on consumption and housing from CIO, Gerard Fitzpatrick

“Base rate changes almost always precipitate a rash of questions about the optimal liability hedging position and whether a fundamental review of policy is required. The reality is that today’s decision will have a very limited impact on liability valuations. The big question remains whether the Bank of England and other central banks are able to successfully avoid a policy error that destabilises economic growth. The focus should remain on the risks within the asset portfolio and the risks associated with any potential economic slowdown.”