The case for emerging markets

Emerging markets (EMs) have received a lot of attention of late – both positive and not so positive. In this article, we look past the current trends and market news that have impacted returns and revisit the case for a long-term exposure to emerging markets – specifically the drivers of growth.

Emerging markets (EMs) have received a lot of attention of late – both positive and not so positive. Had this article been written this time last year, emerging markets would have been finishing 2017 with an eye-watering 35% return. However, as figure 1 shows, returns for emerging markets for 2018 were much less impressive with a high US dollar and tariffs collectively hurting these export-led markets. In this article, we look past the current trends and market news that have impacted returns and revisit the case for a long-term exposure to emerging markets – specifically the drivers of growth. 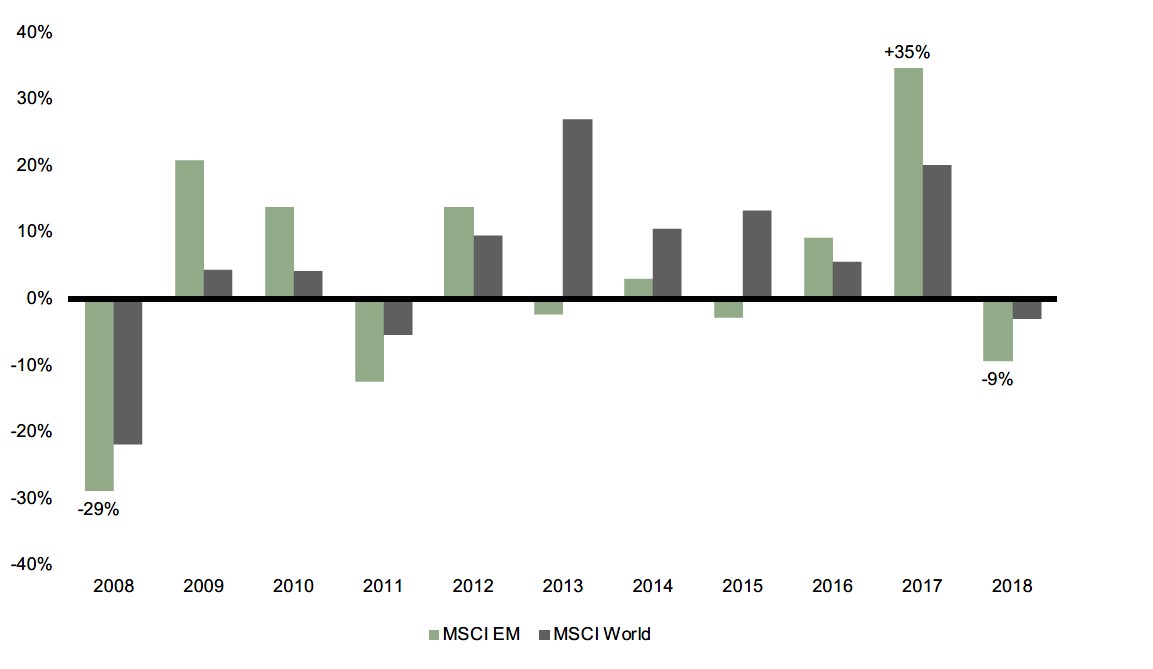 First, what is an emerging market? Countries like Brazil, India, Indonesia, China and South Africa fall under the umbrella of emerging markets. The precise definition of these markets varies in the investment world, but generally these countries tend to have the following characteristics:

Having defined emerging markets, let’s summarise the investment case for an allocation to these markets. The basic rationale is that, over time, as these economies transition from emerging to developed, they experience significant economic growth, driven by productivity gains, structural reforms and the rising middle-class. This economic growth widens the opportunities available to companies in these markets, improving their earnings potential and therefore the return potential for investors.

Productivity is defined as the output per unit of labour. Productivity growth in these markets is possibly best explained using the agricultural sector. Developed markets (DMs), like New Zealand, have over the years, replaced labour in agriculture with advanced machinery making agriculture more productive. In contrast, the transition from labour to capital is a much more recent phenomenon in emerging markets. This capital development has allowed them to move labour out of agriculture and into manufacturing, improving labour productivity and total output in the economy.2 Essentially, emerging markets are experiencing catch-up growth, whereby they are taking lessons from the developed world and applying them domestically. That is, they are importing technology. Figure 1 shows a simple example of this catch-up growth.

As shown in figure 2, developed markets have gone through phases of innovation in the telecommunications industry over decades – starting from phones with cords, building infrastructure along the way for each innovation, to where we are today with smartphones. Some emerging markets have bypassed the initial phases of phones and have directly adopted smartphone technology. The people using the technology have experienced a huge jump in productivity – going from no telecommunication to using smartphones to not only connecting but also using applications to conduct banking, invoicing and other business activities. The importing of technology allows the labour market to be more efficient enabling emerging market economies to produce more. It is this catch-up in technology that allows them to utilise their resources better and therefore grow more quickly than developed markets.

In addition to achieving production efficiency, it is equally important to put in place political frameworks and economic structures that can not only sustain production efficiency but further enhance it. Developed markets are characterised as having transparent, less corrupt governments, where there is free trade and free flow of capital (i.e., prices are primarily determined by supply and demand). Developed markets’ political frameworks and economic structures promote allocation of resources to the most productive sectors of the economy with an overarching functioning government.

As illustrated in figure 3, over time, emerging markets have moved structurally closer to developed markets by strengthening political institutions, reducing trade barriers, reforming agricultural and banking sectors and improving basic education. This has promoted economic growth.3 Some of the recent reforms in these markets include:

Overall, as emerging markets move structurally closer to developed markets through reforms such as these, they have seen strong economic growth, experienced large flows of foreign direct investment and improvements in living standards (i.e., the rising middle-class).

So, why is this relevant to investors? The growing middle-income class has been a key driver of consumption growth. Generally speaking, as people experience an increase in income, they spend more. The spending opens new opportunities for businesses to improve earnings potential, driving valuations higher. This improvement in valuations has seen the cumulative flow of funds into emerging markets increase markedly over the last decade.5

No investment is without risk, especially in EMs. Some of these risks include:

While risk management is at the forefront of most investors’ minds, generating strong returns from the growth component of a portfolio is still important. Emerging markets have experienced huge economic growth in the past but there is still a big gap in productivity with their developed counterparts. Emerging markets’ political and economic structures are yet to reach the standard of developed economies, and middle-class consumption is forecasted to increase further. Collectively, these long-term drivers of growth can turn into enhanced returns for investors. To re-emphasise the basic rationale for investing in emerging markets: as they shift from agriculture to manufacturing and then eventually services, the growing middle class will benefit those companies servicing this demand, driving valuations higher and therefore investor returns.