At the 2018 G-20 Buenos Aires summit that concluded last weekend in Argentina, U.S. President Donald Trump and Chinese President Xi Jinping agreed not to impose any new tariffs for three months to allow negotiations to continue at the technocrat level.

No more tariffs for three months

At the 2018 G-20 Buenos Aires summit that concluded last weekend in Argentina, U.S. President Donald Trump and Chinese President Xi Jinping agreed not to impose any new tariffs for three months to allow negotiations to continue at the technocrat level. This ceasefire delays the ramp up in the U.S. tariff rate from 10% to 25% that was scheduled for the 1st of January (impacting $200 billion of Chinese imports). The agreement stalls Trump's threat of new tariffs against the final $267 billion of imports from China, at least temporarily. In response, China "will agree to purchase a not yet agreed upon, but very substantial"1 amount of U.S. exports.

Until very recently, there has been little discernible impact from the trade war onto our high frequency business confidence tracker. In the November regional U.S. Federal Reserve (Fed) surveys, however, we saw a marked stepdown in the optimism of U.S. manufacturing executives. It's difficult to disentangle how much of this was from lingering trade concerns versus the moderation in global growth rates and the collapse in crude oil prices — but we suspect the latter forces are playing a more significant role.

Where next for stabilisation?

The next Beige Book report from the Fed, scheduled for release on the 5th of December, will give us a cleaner read on the underlying narrative. At present, we expect there to be a stabilisation/rally in oil, a stabilisation/reacceleration in Europe and Japan as well as a stabilisation in China. Given this, we look for our confidence tracker (and other broader indices like the Institute for Supply Management Index — i.e., the ISM Index) to stabilise firmly in the zone consistent with positive above-trend economic growth. The sharpness of the recent dynamic bears a watchful eye, though. 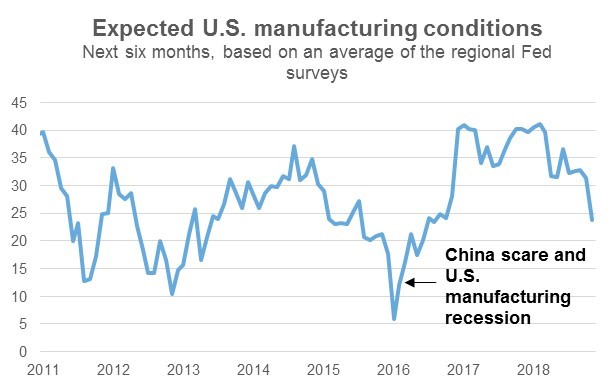 The implications for the Fed are mixed. The first order effect is that the ceasefire removes a near-term event risk for the December and March Federal Open Market Committee (FOMC) meetings, making hikes marginally more likely on each of these dates (where we already had high conviction levels). Easier financial conditions, should they emerge, would also be a tailwind for the Fed's ability to deliver on its intended rate hike path. The recent weakness in core PCE inflation, however, coupled with the delay in potential tariff-related inflation boosts, does suggest some potential for a Fed pause scenario in June. To be clear, this is not our baseline view. As we can see in the chart, the inflationary consequences of tariffs are transitory — meaning the Fed is likely to look through them. Our expectation of continued above-trend U.S. economic and employment growth should continue putting pressure on a very tight U.S. labour market. Furthermore, our team expects an abatement of the downside risks emanating from non-U.S. growth.

From a Chinese economy perspective, the Xi/Trump meeting in early December was a touch better than our expectations. In terms of economic implications, there's nothing here to change our expectation of a moderate-risk slowdown in the Chinese economy in 2019, from 6.5% gross domestic product (GDP) growth to 6.0% GDP growth.2 While the uncertainty around such estimates is always high, we believe it's convenient to calibrate and track the China impact of the trade war in terms of GDP impact. The best outcome we see would be a one-off permanent reduction of Chinese real GDP by 0.5%. The worst outcome, from our vantage point, would be a negative GDP hit of 1.5%, which we would associate with a high to very high-risk slowdown. As at today, we anticipate that there will be a 0.75% real GDP hit.

1 White House, “Statement from the Press Secretary Regarding the President’s Working Dinner with China” 1 December 2018. Accessed via https://www.whitehouse.gov/briefings-statements/statement-press-secretary-regarding-presidents-working-dinner-china/