Brexit heats up: 4 things to watch

With the outcome of last year’s Brexit vote paving the way for the UK to leave the European Union (EU), British Prime Minister May began the formal divorce proceedings last month.

And now, she has surprisingly called for a snap election, earlier than expected, on 8 June.

In the meantime, I keep hearing from investors, what does this mean for the markets? In Europe? In the UK?

Not just any deal will do
The politics of the outcome of the Brexit referendum are complex. Let’s leave it to say that many who supported her, expected Prime Minister May to draw a much firmer line than the realities of both the EU and UK economies could withstand.

After all, according to the UK Office for National Statistics (ONS), as the UK’s closest neighbour, the EU is the destination of 44% of the UK’s exports of goods and services and the source of 53% of its imports as of 2016. The same data shows that exports to the EU account for ±13% of the UK’s Gross Domestic Product (GDP) and are a much bigger share than the EU’s equivalent exports to the UK at ±4% of GDP.

The EU also regulates a lot of important issues, such as nuclear energy, air travel and of course external trade with non-EU countries. If the UK were to simply leave the EU without any kind of deal, it would risk serious disruption in trade, supply chains, air travel, energy supply and of course immigration.

The prospect of lorries stacking up in Dover, grounded airplanes and an influx of immigrants from Calais weighs on May and her supporters.

This is likely part of the reason May has called a snap election. If the latest polls are correct1, she will be able to increase the Conservative majority, which will allow her to work around some of the more hardcore Brexit factions.

Coming to terms
Given this situation, the Prime Minister is working to modify her approach. As a first step, she announced that the UK might need to pay a divorce settlement as part of the exit agreement.

A second step entailed her conceding that even if the EU were to allow exit and trade agreement talks to partly run in parallel, it’s very likely there will need to be a bridging agreement that preserves the status quo.

In a third step, by calling for a snap election now, May has extended the timeline for the next general election from 2020 (one year after Brexit is expected to be completed in 2019) to 2022. Thus, instead of confronting voters one year after Brexit, she will now have three years.

And finally, a tacit understanding is developing that many of the regulatory bodies will probably need to be duplicated. That, combined with the need for free trade, means the future relationship might actually not turn out to be that different from its current EU membership.

Four things to watch in the months ahead
The election campaign: We will be closely watching on what Brexit platform May will campaign. Will it be her initial Hard Brexit (i.e. leaving without any deal between the UK and EU) line or her current Not-so-Hard Brexit (i.e. taking more of a long-term discussion/divorce proceedings-like approach) line? Markets are currently anticipating the latter, but we think most of the impact of her change in stance is behind us.

The tenor of negotiations: On 29 April, the EU will formally approve its response to the UK’s notification that it invokes Article 50. The guidelines included in that response will draw the EU’s battle lines.

In my view, the outlook is not great for the UK for next steps on the Brexit. The draft EU response, which is fairly strict in its terms, has met with almost universal approval from the EU members.

And with all the Gibraltar-like political scores still left to settle, it may make for acrimonious negotiations that could prompt market volatility. If this is the case, it is likely to create more uncertainty that could weigh on the UK’s economy.

Market reaction to ongoing negotiations: As negotiations progress, it will be important to watch the market’s reaction. If the market reacts strongly to the first setback like it did when May made her first hard Brexit speech (see chart below), that could be worrying 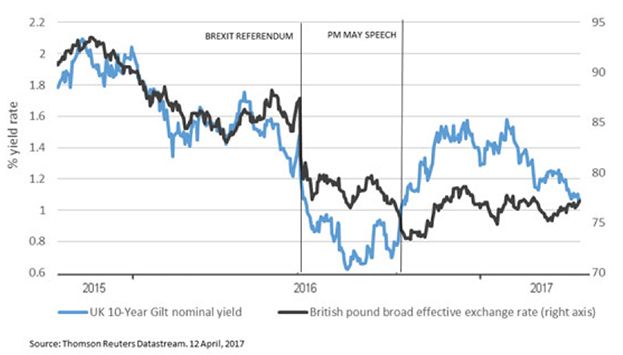 If instead markets are largely unfazed, that would indicate that the risks are likely already mostly priced in. As I’ve noted before, the pound exchange rate is still the best indicator in this regard. Indeed, its reaction to the call for a snap election was promising. However, our team of investment strategists also watches the yield on the British 10-year government bond, the Gilt2, as an indicator of the expected economic fallout.

Economic developments: The UK economy has done remarkably well in the aftermath of the referendum, but now the impact of the large decline in the pound is starting to be felt, as we recently noted in our Global Market Outlook- Q2 Update.

Living standards have started to decline as wage growth3 decelerates and inflation picks up.4 Survey-based leading indicators such as producer confidence5 are still strong, but business investment, according to March 15, 2017 ONS data, continues to decline.

I expect the British economy to slowly lose momentum, but will be on the lookout for conditions to worsen more quickly. Consumer spending and housing activity will be particularly important to watch in the months ahead.

So, keep an eye on the election campaign, the negotiations and UK economic indicators in the months to come. I don’t believe there is any reason to panic and run from UK opportunities, but potential political risk does need to be closely monitored.