How could the Brexit impact the British Pound?

It is natural to prize social co-operation if, like my homeland in the Netherlands, your country lies more than a metre below sea level. By contrast, islanders may have more mixed opinions on the merits of integration with their neighbours. From an investment strategy perspective, however, our view on Brexit is clear – it will likely lead to weaker sterling and, to a lesser extent, a weaker UK stock market.

At the turn of the year, our forecast for UK growth was already pretty cautious. At 1.5% to 2.0%, our GDP growth expectation was decidedly below market consensus and much lower than the forecast from the Bank of England (BoE). Our reasons for caution included the negative impact of several headwinds: fiscal austerity, a slowdown in global growth, and risks around the strength of consumer spending.

Since then, both the consensus and the BoE forecast have come down, but we still think they are too high. In fact, we now expect growth to come in at the lower end of our range at 1.5% versus the BoE forecast of 2.2%.

Our main reason for increased caution is the observation that UK growth is now basically firing on one cylinder: consumer spending. Government spending is turning negative, trade is under pressure from the global growth slowdown, corporate investment is weak due to a collapse in earnings (see chart below), and housing is slowly rolling over.

Of course, the consumer is a force to be reckoned with. Consumer spending is a large part of GDP. However, consumer spending, historically, is closely related to the fortunes of the housing market. And with London coming off the boil and construction slowing down, we see the first signs that the market is about to turn negative. 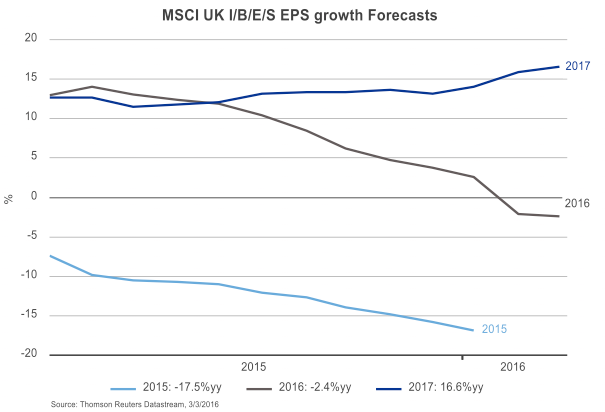 In addition, despite unemployment being very low, wage growth has decelerated lately. In any case, we can’t expect consumers to carry all the weight even if they are able to maintain spending. More caution is therefore warranted.

Now it is up to the British people to decide whether or not they think there is a strong enough rationale to stay in the union. The referendum to do so is scheduled for June 23, 2016.

The decision of Mayor of London, Boris Johnson, to campaign in favour of the out campaign was a setback for the Prime Minister. He is after all the country’s most popular politician. However, it might also turn out to be a blessing in disguise, because we believe that Cameron can spin the referendum as a choice between two leaders, and he still has the upper hand in that regard.

The deal itself is largely symbolic. There are a few cosmetic changes such as new standards for welfare benefits for immigrants, but nothing substantial in the relationship between Britain and the EU. The choice at hand is therefore much more about the long-term benefits versus the long-term costs of EU membership.

Given the high degree of trade integration, that choice would normally favour a vote to stay in. Also, given the worries around ISIS, the increased cooperation in areas of security and defence over the last decade should help the campaign to stay in. However, the risk is that the vote will not be decided on long-term considerations, but instead turns into a referendum on issues such as the Syrian refugee crisis and high home prices (for which immigration is blamed).

Because of that risk and the uncertainty it entails, we have decided to downgrade our UK business cycle score in our Cycle, Value and Sentiment appraisal process from -0.5 to -1.0. We expect the uncertainty will weigh primarily on the pound and, to a small extent, on UK equity markets. For the gilts* market the situation is more balanced, with lower foreign demand pushing yields up and lower expected growth and inflation pulling them down.

We are maintaining our underweight in UK equities. Fixed income investors should keep their expectations low with respect to gilt yields. Without the BoE hiking rates and without a big bounce in the oil price to US$50 per barrel, we expect the yield to move within a relatively narrow range of 1.5% to 2.0%.

For more on our investment strategy outlook this quarter, see our Global Market Outlook - Q2 Update.

*Gilts are bonds that are issued by the British government and generally considered low risk. Gilts are the U.K. equivalent to U.S. Treasury securities.