On March 16, news broke that British political consulting firm Cambridge Analytica had gained improper access to data from as many as 50 million Facebook users (an estimate that has since been upped to 87 million).1 That firm and its top executives are now also under fire for alleged violations of U.S. election laws, and Facebook is facing heavy scrutiny of its data security, audit procedures and disclosures. Its stock price is down more than 17% since the issue came to light.2 In our view, the stock’s slide reflects three potential threats to Facebook’s growth and its bottom line.

Three potential threats to Facebook’s growth and its bottom line

1. Potential for regulation and fines

Congressional committees successfully called on CEO Mark Zuckerberg to testify (he appeared before both houses of Congress April 10-11), while several states’ attorneys general and the Federal Trade Commission have since opened investigations, and representatives like Senators Amy Klobuchar (D-MN) and Mark Warner (D-VA) have drafted legislation that would force additional disclosures from Facebook. Some have estimated that Facebook could face fines in the United States and Europe topping $1 trillion based on regulations like the European Union’s General Data Protection Regulation (GDPR) 3 and previous U.S. rulings.4

2. Loss of subscribers and/or subscriber data as #DeleteFacebook trends

These are threats to popularity and usage which, ultimately, impact the company’s revenues.  One rudimentary indicator of the surge in sentiment is Google Trends data showing a 300% uptick since March 15 in the search term “how to delete facebook”. 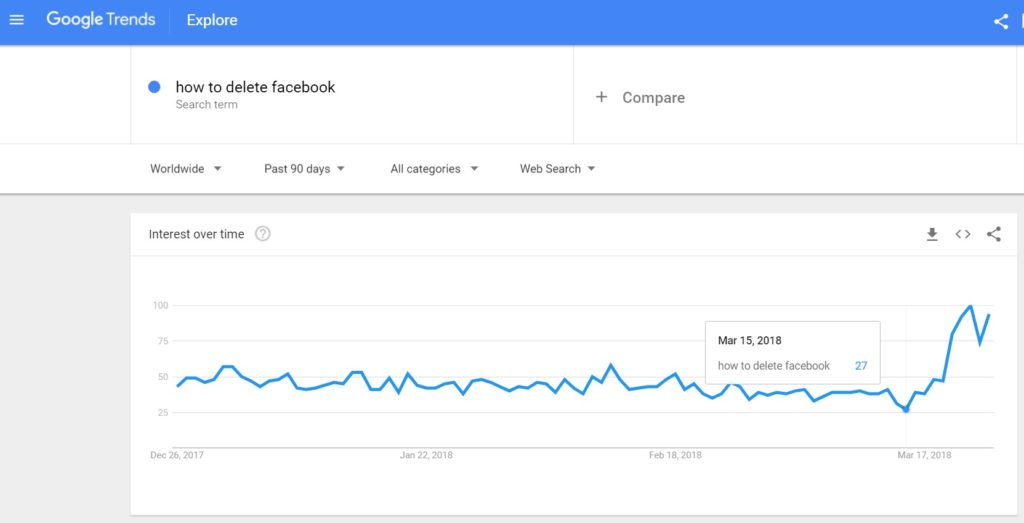 Some of the world’s largest advertisers have led boycotts, pushed for concessions, and cut digital ad budgets.5

While Russell Investments is a Facebook shareholder through the underlying managers that make up our multi-manager portfolios, we currently maintain a significantly underweight position and our equity portfolios reflect this. Our position is  approximately less than half the 1.04% weighting in the MSCI World Index.6

Our active managers are carefully determining whether this a temporary setback or a major reckoning, and we’re actively observing and evaluating this process.  Controversial situations like this are a primary means to confirming and appraising the skill of active managers that we rank and hire.  As the scene at Facebook unfolded, we solicited commentary from top holders, and we weren’t surprised to find that managers’ opinions on the return potential of Facebook going forward is divergent.

It’s not our role to tell these managers whether they are right or wrong.  Rather, we determine whether each active manager’s due diligence and ultimate decision reflects what we know and expect from their process and philosophy.

Some of our active managers will apply a responsible investing lens to these issues, and it’s an approach that can serve them well.  Our research has confirmed that environmental, social and governance (ESG) factors can impact security prices, and the events affecting Facebook are a case in point.  Why?  We believe the digital security issues plaguing the company amount to a social and governance issue, and some investors are viewing it as a red mark on Facebook’s ESG scorecard.  To wit, ESG- and socially responsible investment (SRI)-aware funds are stepping back and/or raising their voices in light of the Cambridge Analytica revelations.  For example, Nordea Bank has forbidden portfolio managers of its sustainable funds from buying Facebook shares for at least three months.7 And, if it doesn’t get out in front of shareholder concerns, we can expect Facebook to face proxy proposals later this year requesting the establishment of a risk oversight committee and increased reporting around content policies and content management.8

Third-party evaluators are also providing their input.  Following this incident, Sustainalytics downgraded Facebook’s controversy rating, citing “serious questions regarding Facebook's management of its users' data and whether it can balance its considerable privacy commitments and expectations with its commercial approach.”9

But this incident, and Sustainalytics’ activity around it, also serves to reinforce an observation made by many fundamental and quantitative managers alike: ESG scores may offer very little value in terms of investment timing and stock price predictability.  Indeed, Facebook’s vulnerability to data privacy risks has been discussed in the media for years10, and yet the stock was up 223% from January 1, 2014 into the beginning of this year.11  In our view, recent downgrades by ESG providers have tended to be a reaction that followed the privacy breach.

Ultimately, Russell Investments believes that a deep understanding of how ESG factors impact security prices is a critical value-add to a skillful investment process.

And, we feel that these circumstances serve to validate our approach to evaluating and scoring managers on their approach to ESG.

Why? For starters, we survey every high-interest manager in our universe.  In 2017, this included over 250 managers around the world and several hundred products across all asset classes.  We follow this up with a qualitative assessment that leverages situations like this — i.e., Why did/didn’t you own Facebook, and what risks were identified in pursuit of that decision? — to draw nuanced distinctions between investment manager approaches.

In general, we have observed that many managers are increasingly declaring themselves ESG-friendly by subscribing to third-party data and touting their status as United Nations’ Principles for Responsible Investment (UNPRI) signatories, but, in our view, these often appear to serve only as window dressing for greenwashing purposes.  Because of this, our manager research process emphasizes qualitative and holistic assessments, which allows us to determine whether managers are both ESG-aware and ESG-effective.  There’s a difference.

Facebook isn’t the first company caught in this kind of controversy, and large data breaches are, unfortunately, nothing new. Equifax, Target, and Yahoo suffered similar lapses of security, followed by destruction of market value and consumer trust.  In fact, by at least one comparison, Facebook’s 17% drop is a modest reaction: Equifax’s stock fell 35% during a two-week stretch following news of its privacy breach in September 2017.12 The market seems to be signaling — at least for now — that Facebook’s prospects are only temporarily dented by this controversy.

That said, we expect our managers to keep a close eye on the situation and continually validate their investments as the situation and the market changes.  These data and privacy-oriented regulatory, social and business issues apply to any data-driven business model, not just the giants like Apple, Twitter, and Google.  In the case of Facebook, changes in subscriber counts won’t tell the full story.  Some users will maintain their accounts, but enable restrictions that limit the collection and sharing of their data.  This likely means that investment teams that monitor and consider specific indicators of digital ad spending and consumer sentiment (something more sophisticated than the Google Trend chart above) will have an advantage.

Ultimately, we’re not expecting an easy resolution to the scandal.

After all, consumers and the companies collecting their digital breadcrumbs have competing interests in technology that continues to grow and evolve.  In short, we believe that the potential impact of industry trends, market fundamentals, and quickly evolving risks create a multi-dimensional puzzle for Facebook investors, but active managers who carefully consider the risks involved may be well placed to seize upon the opportunity.

Related Posts
Fiduciary Management service – what does it look like?
Confessions of a portfolio manager – #2
Volatility strikes back. Is this the start of a bear market?