The Chinese economy continues to recover from the COVID-19 shock and is now close to pre-pandemic output levels. This is quite a significant feat, given the depth of the downturn in the first quarter, and the fact that the International Monetary Fund expects other large countries to not return to pre-COVID levels until 2022. China’s economy has been supported by several key factors:

The consumption side of the nation’s economy has played catch-up to the production side of the economy. This is a particularly important development when considering the outlook for government policy, given the Chinese government’s focus on the concept of dual circulation. This reflects the desire of the Chinese government to further strengthen the domestic demand and accelerate the economy’s shift away from being an export and capital-heavy economy to a consumption-based economy. This is essentially one of the key transitions that is needed to ensure that China does not fall into the middle-income trap.

The Chinese government and central bank have already been discussing when to start reducing the amount of stimulus. We think what’s likely to happen is that we’ll see a continuation of the hand-over from monetary policy to fiscal stimulus. The PBoC  (People’s Bank of China) governor, Yi Gang, has expressed concern about the level of borrowing that has occurred in response to the lower interest rates and increased liquidity - suggesting that further monetary easing is unlikely. However, the removal of support is likely going to be delayed until at least the end of the year, given the need for liquidity from the banks in the final two months of the year.

We think that fiscal stimulus is going to remain supportive through 2021. Infrastructure spending and projects will be key drivers of fixed asset investment. We also think there is the potential for more stimulus to the household at the upcoming National Peoples Congress meeting (likely in March), given the Chinese government’s pursuit of dual circulation and boosting domestic demand.

With the U.S. election now in the rear-view mirror, and the latest vaccine developments looking encouraging, let’s re-examine one of the risks that the market has faced over the last couple of years: the U.S.-China relationship. At this stage, it appears that President-elect Joe Biden will likely be more diplomatic in the relationship with China - and less likely to use tariffs as an instrument of engagement. However, we do not foresee a return to pre-Trump era relations with China. 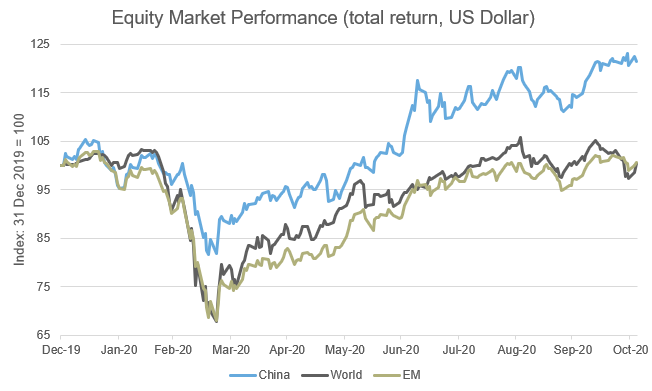 This is because the EM equity index has a very high level of concentration of Chinese companies. China now accounts for 43% of the MSCI Emerging Markets Index - and just over 20% of that is in six companies (Alibaba, Tencent, Meituan, JD.com, China Construction Bank and Ping An Insurance). These companies have done extremely well in recent years - not unlike the tech names in the United States - and now are priced at expensive valuations.

While emerging-market economies outside of China still face some challenges, the overall outlook has improved. First, increased vaccine procurement by groups like COVAX is encouraging. Second, whilst the fiscal situation remains more challenged than developed economies, the restarting of the global economy should provide a boost through external demand, and the resumption of tourism is also likely to be a significant boost.