A Fed rate cut looks unlikely this year. Here's why.

Although markets currently peg the odds of a lowering in borrowing costs at roughly 55% by the end of 20191, we see this as an unlikely outcome, especially in light of Fed Chairman Jerome Powell’s remarks earlier this month. While the central bank’s statement following its 30th April-1st May meeting was dovish in nature, noting that inflation has “declined and [is] running below 2 percent”, Powell struck a more hawkish tone in the ensuing press conference, commenting that some (if not all) of the softness in inflation is likely to prove transitory.

Specifically, the Fed chair cited weakness in the portfolio management sub-component of the PCE (personal consumption expenditures) price index, and methodological changes in the volatile apparel sub-component — emphasising that trimmed mean measures have been more stable at 2%. The two charts below provide helpful, direct visualisation of the inflation anomalies Powell described. 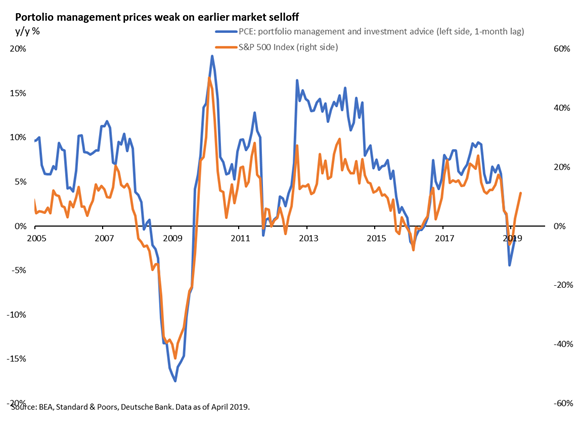 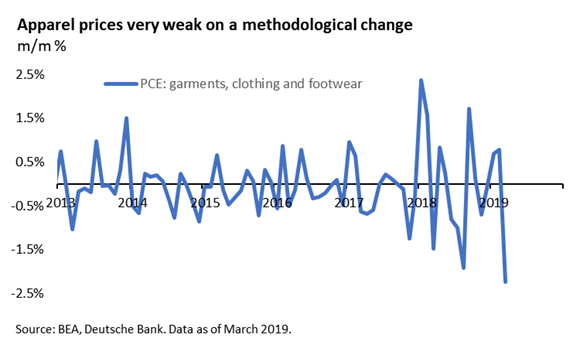 Ultimately, the Fed does not see a strong case for moving interest rates in either direction right now — viewing the current policy stance as appropriate.

Does this mean interest rates could stay unchanged through 2020? Not necessarily, although we don’t foresee any potential rate hikes until the end of this year at the earliest. Powell stressed in his press conference on the 1st of May that he wants to see threatening core PCE inflation data in order to kick start the tightening cycle again — and the Fed’s downgraded assessment of core inflation suggests the central bank is in no hurry to hike. On the other side of the coin, the Fed upgraded its assessment of growth in its May statement, characterising the labour market as strong and the economy as solid.

There is a risk, as Powell mentioned,that the weakness in inflation continues in the coming months. To be clear, we see this as merely a risk scenario — and not our baseline. Our expectation is that the inflation numbers should bounce back for many of the same reasons that Powell discussed earlier this month. But that outcome cannot be completely guaranteed. Chicago Fed President Charlie Evans recently noted that if core PCE inflation were to dip below 1.5%, a preventative cut may be warranted.2 In addition, several other policymakers (e.g., Fed Governor Lael Brainard3 and Fed Vice Chair Richard Clarida) have emphasised the importance of enforcing the Fed’s symmetric 2% inflation objective in the past month.

With the recent misses (both within the Q1 GDP release on 26th of April and the March numbers released on the 29th of April), core PCE inflation now stands at just 1.55% on a year-over-year basis.4 This is obviously now uncomfortably close to Evans’ 1.5% threshold. Furthermore, the PCE numbers from April and May of 2018, which will soon fade out of the year-over-year data, were quite strong. Put differently, if inflation does not bounce back, and instead just runs at typical levels from the last 3.5 years, the Federal Open Market Committee (FOMC) could be facing consecutive inflation numbers that are sub-1.5% at its July and September meetings.

Yet, we think that even this alone would likely not be enough for the Fed to slash borrowing costs. Powell’s remarks on the 1st of May, where he noted that the central bank would need to be convinced in the “persistence” of such an undershoot before taking action, further cements our belief. In order to establish such a conviction, the Fed would likely look to inflation expectations (and other measures) for evidence of a slippage in the medium-term outlook. While 5-year, 5-year forward inflation expectation rates and breakeven pricing are subdued, they’ve partially normalised with the rally in crude oil this year. This data will be another important risk marker in the months ahead. 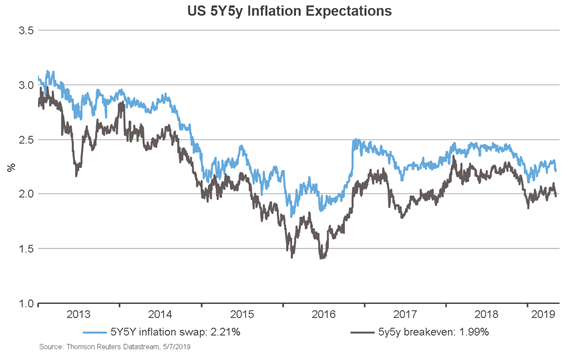 It is worth mentioning that, historically, U.S. recessions and recession scares have been the primary catalyst for late-cycle rate cuts. In the two most recent such instances (1995 and 1998), the Fed was very worried about downside risks to the U.S. economy. In July 1995, the Fed was tracking negative U.S. real GDP growth for the coincident quarter and forecasting a slowing of inflationary pressures. In late 1998, significant uncertainty around global growth following the Asian financial crisis and the collapse of Long-Term Capital Management — coupled with the risk of a credit crunch, an Institute for Supply Management manufacturing index below 50 and core PCE inflation of just 1.3% — pushed the Fed to launch a sequence of preventative rate cuts.

The current backdrop is not this extreme. While there was some evidence of a sharp slowing in the global economy at the end of 2018 (which is precisely why and when the Fed paused), conditions have subsequently improved. Financial conditions have eased markedly, and the global policy response — both in terms of Chinese stimulus and the Fed and other central banks’ dovish monetary policy shifts — have buffered against downside risks on a global scale. This is the primary basis for our convicted and differentiated view from the market that the Fed will not cut rates this year.