The US Federal Reserve (the Fed) has two congressionally mandated goals - full employment and price stability. Right now, the labour market is overheating and inflation is too high. That is a clear prescription for a restrictive monetary policy stance.

It's hard to know the interest-rate level that is the tipping point between accommodative and restrictive policy. But a rough consensus amongst economists and investors is that US rates need to push beyond 2.5% to start to cool the economy down. Moving off of the zero lower bound in early 2022, the Fed had some heavy lifting to do to get to this point. Successive supersized rate hikes, including the Wednesday, July 27 75-basis-point move, now take them to this important crossroads. The federal funds rate now trades in a range of 2.25 to 2.5%. Policy is roughly neutral now. The Federal Open Market Committee (FOMC) noted that "ongoing increases…will be appropriate." And Chair Powell, in his press conference, noted that "another unusually large increase could be appropriate at the next meeting." On the other hand, markets appeared to be rallying immediately after the recent Fed announcement, likely on the hopes that the Fed will at some point slow down the pacing of hikes. Those hikes from here will be harder. As interest rates move into restrictive territory, the central bank will be engineering an economic slowdown to restore price stability. 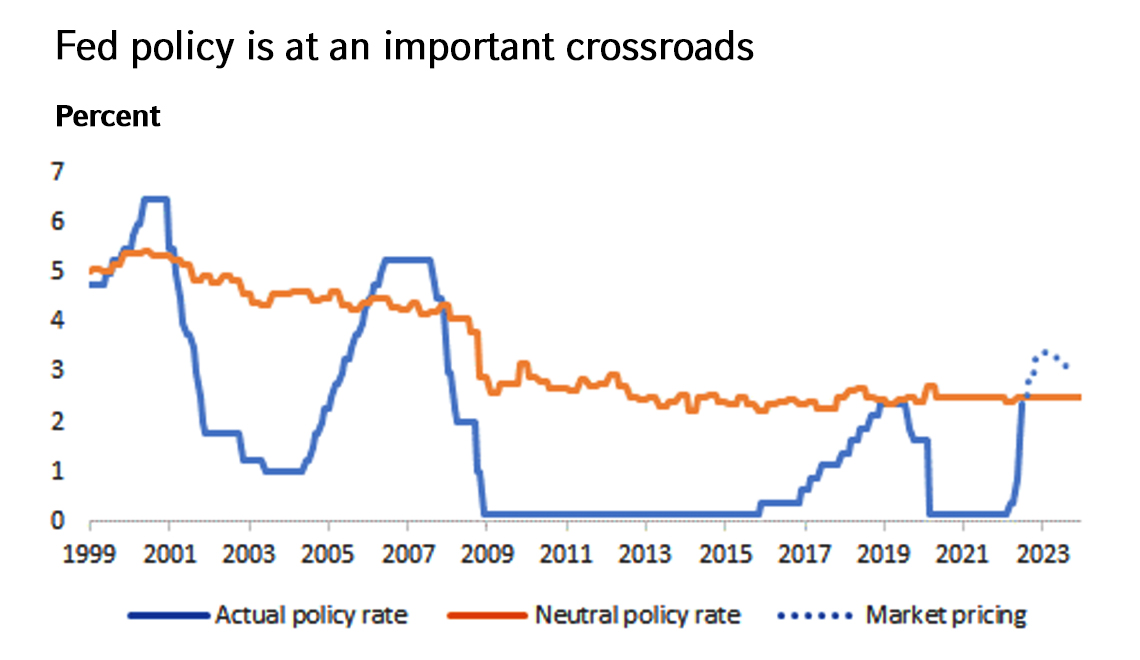 That is a path of pain. The Fed might stick a perfect soft landing - where inflation moderates back down to 2% and economic activity bends but doesn’t break - but it is not an easy feat to achieve, and recession risks are now elevated. In the Fed’s favour are strong private sector balance sheets, anchored inflation expectation and the potential for supply-side disruptions to eventually heal. In a recession's favour are significantly more points: economic history, labour market imbalances, a broadening out of inflation into stickier price categories, negative real income growth, weak consumer and business confidence, the speed at which the Fed is hiking rates, the associated sharp tightening of financial conditions and early evidence of a global economic slowdown.

The year-to-date decline in asset prices reflects a partial discounting of these macroeconomic risks. At Russell Investments, we lean on our Cycle, Valuation, Sentiment process to inform our investment strategy. Concerns around the business cycle outlook for equities have been offset by evidence of panicked market psychology, particularly at the lows from mid-June. That constellation is one where we think it is appropriate to emphasise balance in a portfolio strategy. For institutional investors, it is an environment where sticking to your strategic asset allocation is appropriate. For individuals, it is an environment where the professional advice and investment plan from a financial adviser can provide critical investment discipline to meet your long-term goals.

We continue to look for opportunities and dislocations across markets in an environment where economic and market volatility is high. For example, in June our fixed income strategists assessed that increasing recession risks, better government bond valuations (following the significant rise in Treasury yields) and very short investor positioning in bonds created an attractive entry point for certain portfolios to add duration.

Are we already in a technical recession?

As a final point, US GDP will be released for the second quarter on the morning of July 28. It is possible that the number will be negative and satisfy the conditions for the colloquial understanding of a technical recession - two consecutive quarters of negative real GDP growth. Recessions risks are real and important for the outlook. But such a technical outcome tomorrow would likely be inconsequential for markets. Real GDP growth was negative in the first quarter due to a drawdown in inventories - which has a positive signal for future production - and a deterioration of the trade balance. Businesses hired a lot of workers and consumers bought a lot of stuff - it just was the case that more of those goods and services were produced abroad.

A real recession - which in the United States gets determined by a group of economists working for the National Bureau of Economic Research’s Business Cycle Dating Committee - is characterised by the breadth, duration and magnitude of negative economic data. Breadth, duration and magnitude are lacking here, particularly for the labour market, where nonfarm payroll employment growth has averaged 375k for the last three months - an excellent result, historically. You almost always need the labour market to fall over to have the larger negative spiraling effects onto demand and the broader economy. That could happen. But it hasn't happened yet.