The dichotomy between views from interest rate managers and credit managers continues. In this survey, rates managers have blinked first.

This quarter’s survey closed right in time for the recent market sell-off, thus managers did not have the benefit of hindsight with regards to market repricing. Nonetheless, the results continue to provide valuable insight.

In this survey rates managers have blinked first and are adjusting their views.  Managers are forming a consensus on higher rates: the Fed Funds peak forecast came in 40bps higher than the previous survey and expectations for the 10-year US treasury showed a build of managers expecting it to be 2.8% or higher, which subsequent to the survey has materialised.

The question is whether these higher rates that are expected will ultimately also impact credit market fundamentals.

As of this survey the answer is no.  Participants are favouring High Yield credit again on the back of perceived improvement in fundamentals, but managers express caution with investment grade credit. Amongst credit markets, managers favour non-agency mortgages most in terms of spread tightening.

Finally, the USD is perceived to be in a continued weakening phase, which also serves as a tailwind to Emerging Market currencies.  However, if the Fed delivers the three or more rate hikes, that 85% of interest rate managers expect, a legitimate question is will this weakness continue and what impact will it have on local currency emerging market debt?

In our Q1 2018 survey, we received answers from 70 different fixed-income investment firms across the world, with specialist teams at each of these firms assigned to provide answers for their respective subsectors. Leading bond and currency managers in eight specialised areas were asked to consider valuations, expectations and outlooks for the coming months.

Caution is warranted in investment-grade (IG) credit, while perceived improvement in global high-yield (HY) credit fundamentals are driving a view towards stability and coupon clipping.

Global IG credit managers continue to temper their expectations, with only 19% of respondents expecting spread tightening, falling from 25% and 57% in the previous two surveys, respectively. Last quarter, 32% of global IG credit managers preached caution, believing credit spreads did not compensate for potential deterioration of credit fundamentals. In the previous four surveys, that cautious view never breached 38%. This quarter, that number has jumped to 56%, That being said, range-bound spreads are still the flavour of the day, with 59% believing so. Our definition of range-bound spreads is 50bps for HY credit and 10bps for IG credit.

In global HY credit, we see a similar story, with 68% of all managers seeing spreads as range-bound. Those expecting any spread widening shrunk from last quarter’s result of 28%, to only 5% this quarter. We believe the likely driver behind this change was improvements in the trend of corporate fundamentals, with 79% of surveyed managers seeing modest improvement (compared to only 44% last quarter) and 11% seeing material improvement (compared to 0% last quarter), which contrasts with our observation made in global IG credit.

Most managers expect three-to-four U.S. interest rate rises over the next 12 months, an increase of one-to-two hike expectations over the previous quarter’s survey. We’ve seen a similar one-two hike repricing in the forward curve since the last survey. Part of this increase comes from U.S. inflation expectations increasing, with the average now being 2.06%, up from last quarter’s 1.95%. With the recent elevations in wage inflation and Core CPI, we see a clear trend reversal in managers’ inflation expectations. 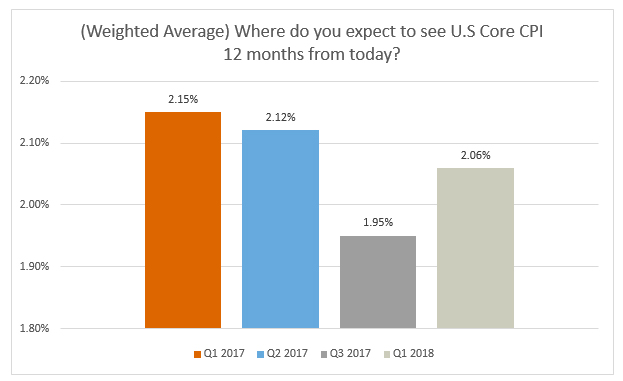 Similar to the trend reversal seen in rate hike and inflation expectations, we saw an increase in the expected terminal funds rate by the Fed.

In previous quarters, we saw a lack of consensus in managers’ Fed funds peak rate forecast for this cycle, with 76% perfectly split between 1.76% and 2.75%. As managers have become more bullish on the number of rate hikes left in the cycle, 42% see a terminal range between 2.5 and 2.75%. 84% see the range between 2.26% and 3.25%. While this shift is likely spurred by recent developments in growth and inflation, it still represents a terminal rate much lower than previous cycles. 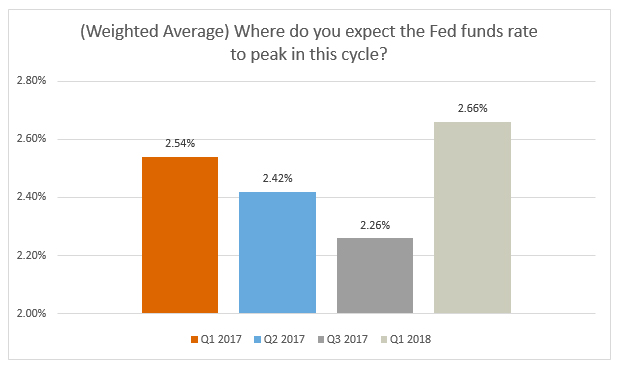 The Mexican peso has fallen from its pedestal as the most favoured currency since Trump was elected. Despite NAFTA risks on the horizons, managers correctly predicted the outperformance of the currency. Today we are presented with a hotly contested view on the Turkish Lira: It has topped our list as both the most attractive and least attractive currency over the next 12 months. Valuation and yield serve as a tailwind to the currency, but politics and the lack of an orthodox central bank policy has investors equally on edge.

Surveyed managers are as bullish on EM currencies vs. USD (as represented by the J.P. Morgan GBI-EM GD Index), as they’ve ever been over a 12-month horizon since our survey began in July 2016. 46% see a strong positive from currencies, while an additional 19% see currencies as a slight positive. Should this view come to fruition, it would provide good support for the 6% yield on offer in the asset class, explaining why 86% of managers see a return of 6-12% over the next 12 months. Currencies have rallied from their nearly two standard deviation cheap valuation levels in early 2016 to closer-to-average valuation today. The extent of the bullishness makes us wonder if there’s a potential contrarian indicator evident in the results. That said, Russell Investments does subscribe to the improved fundamental picture, being driven by a strong improvement in current accounts.

Over 94% of our survey respondents believe that LCEMD is more attractive than HCEMD on a one-to-three-year view. Still, managers aren’t particularly negative on HCEMD, with 92% predicting a 2-8% return over the coming 12 months. Expectations are tempered versus the previous quarter, where 79% of managers expected HCEMD returns of 6% to 10%+. The reduced expectation is likely caused by compressed spreads—although managers continue to see a higher likelihood of modest tightening—and a duration of seven years for the JPM EMBI Global Index, making it sensitive to any surprise increases in rates.

Emerging-market inflation is no longer expected to move downward.

Last quarter, 62% of respondents expected lower EM inflation over the coming months. However, in line with predictions for increases in developed market inflation, only 14% this quarter see inflation moving lower over the next 12 months. This same trend is visible in EM local rates, where 59% of managers previously believed rates were cheap, versus only 32% feeling so this quarter. 65% now feel EM local rates are fair value.

G10 currency managers have further raised their expectations for the euro-to-USD exchange rate, with one-third predicting 1.31+. There was no consensus view to be found on sterling (GBP), likely caused by the uncertainty of Brexit negotiations. NOK is the new favourite G10 currency, while managers are becoming more positive on CNY.

100% of dedicated FX managers surveyed now believe G10 and EM FX volatility will increase over the next 12 months, potentially creating opportunity over the course of the year.

The securitised asset market has been on an extended bull run since the global financial crisis of 2008/09 and securitised managers remain broadly positive this quarter. Even with the tightening already seen in non-agency securities, 50% of managers see further moderate tightening in loss-adjusted yields. This remains one of the few credit sectors skewed towards spread tightening. Indeed, we observed relative stability in the asset class in the recent market sell-off.  Overall, managers are less worried than the previous quarter about the ability of commercial mortgage-backed securities (CMBS) structures to absorb losses at the BBB-grade level, particularly in the 2012 and 2013 vintages, where retail and mall risk is more prominent. It’s possible the recent weakness in the retail sector may impact views in the next survey. More broadly, residential house prices are expected to rise 3-5% in the next 12 months.

The overall outlook for municipal high-yield assets remains favourable, but has tempered somewhat. 61% of managers expect municipal high-yield to outperform corporate high-yield, a slight drop from the 67% number last quarter. Our observation here is that managers are more bullish on credit risk in municipals, relative to their counterparts in the corporate credit space.

As 30-year AAA municipal/treasury yield ratios continue to come in, managers expectations have shifted. Two quarters ago, 100% of managers saw ratios in the 95-110% range. This quarter, 38% shifted into the 80-95% range. Interestingly, 18% of managers now see potential for municipal outperformance as a result of changes to the U.S. tax code (versus 0% last quarter), believing the Trump administration has little incentive to strain the finances of cities and states.

Our takeaway: Opportunities for active management

It would seem that trends in inflation and interest rate views have now reversed upwards, and the ability to remain nimble to capture this impact on various asset classes will be important.

Such changes to consensus interest rate and inflation views have the potential to greatly impact assets exposed to duration risk, emerging and developed market currencies, funding costs for the corporate credit market, or prepayment speeds in the securitised market. Specialised expertise will provide an indication of the sensitivity of each asset class to these risk factors, while bottom-up resources will help indicate which countries, companies, and securitised assets can weather the storm. Investors should consider maintaining some dry powder, in the form of highly liquid, cash-like assets, on both the interest-rate and credit front. Because volatility is likely to remain for the foreseeable future.