Will the US presidential election impact markets?

The US presidential election has been top of mind for most people, given our 24-hour news channels and relentless coverage. But it’s worth taking a step back to evaluate the real impact of a presidential race on investments, and how that impact compares to other factors.

This year we’re seeing populist movements in both major political parties, successfully tapping into dissatisfaction among segments of the electorate. However, if we go by the numbers, job growth has been relatively strong in the current expansion and is helping push the US unemployment rate down to historically low levels (4.9% as of August 2016)Wage pressures are starting to pick up. and asset prices are flirting with all-time highs. So where’s the dissatisfaction coming from?

A closer look at the quality of labour market growth shows that employment gains have not been equally spread across the spectrum of low- middle- and high-paying jobs.1 Instead, we see a barbelled labour market. Employment growth has been very strong at the two extremes of the pay spectrum. So middle-class voters can be expected to seem dissatisfied when middle-class employment today only marginally exceeds levels from a decade ago.

Source: Russell Investments analysis based on detailed employment and wage data across 89 sectors from the Bureau of Labor Statistics observation is for July 2016

The US Federal Reserve (Fed) is cognisant of these challenges (as seen in recent thoughts from Bernanke and Yellen), but its policy tools are too blunt to address distributional problems in the economy. Fiscal policy, on the other hand, (as set by the US government) is much better suited to take these challenges head-on with precise new legislation.

The lumpiness of this labour market recovery is likely to shape the course of the political US economy debate into November. The manufacturing sector in the US, for example, historically comprised a significant share of middle-income jobs. States like Iowa, Ohio, Pennsylvania, Wisconsin, and Michigan are simultaneously very exposed to the manufacturing sector (chart) and very important swing states in the election. 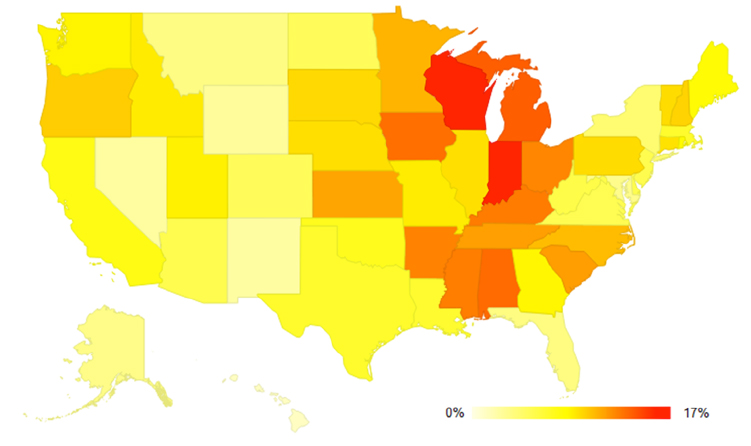 And no matter who wins in November, fiscal policy is likely to remain a small tailwind for growth. Among other things, both Clinton and Trump are proposing new infrastructure spending programs that could support the productive potential of the economy over the longer run. But the President’s power to pass a significant stimulus program through the fiscally conservative House of Representatives could prove difficult.

So the onus will continue to fall on the Fed to support the US economy and further hikes appear to be warranted soon. Indeed, Bill Dudley and Stanley Fischer, two influential voting members of the Federal Open Market Committee (FOMC), have recently confirmed that the Fed is still on track towards its goals. In the long-term, however, the Fed is concerned that it will be constrained by the zero lower bound for interest rates more frequently. As such, researchers at the Fed are thinking about new and innovative ways to support growth over the longer-run. The ideas of a higher inflation target or nominal GDP targeting, once considered far-fetched in Fed circles, have featured more prominently in recent years by some observers, like the Brookings Institution, among others.

The elections do pose some near-term risk to the Fed as well. For example, presidential candidate Donald Trump has made it clear that, as President, he would likely replace Janet Yellen when her term expires in January 2018. While this could engender volatility in markets, Trump also favours the low rates and dovish monetary policy that Yellen has promoted. Given these cross currents, the implications are not obvious.

It may be too early to discount the impact of this election, but we are confident that the results are unlikely to drive the markets. At Russell Investments, we remain focused on the fundamentals of the US stock market, the growing economy, earnings and valuation.

While we all care about the election, when it comes to the markets, our attention is more squarely focused on US corporate earnings and if they can reaccelerate as quickly as current expectations. In the end, that is likely to factor much more into market activity and expectations than the election. That being said, this year’s campaign and election have been unprecedented on many levels, so we will continue to watch for and evaluate new developments between now and November.

1 Russell Investments analysis based on detailed employment and wage data across 89 sectors from the Bureau of Labour Statistics, as of July 2016.