Which asset classes perform better when inflation is high?

Pick any barometer of costs these days, and the story is the same: Prices are up—and in dramatic fashion. By every measure, U.S. inflation is running at the highest levels in decades—an uncomfortable fact recently confirmed by the release of the U.S. consumer price index (CPI) for February, which showed that consumer prices last month rose at the fastest clip since January 1982. And, to add to investor worries, the February survey was conducted before Russia invaded Ukraine on Feb. 24, sending energy prices soaring due to concerns over supply. The situation in Canada echoes that in the U.S., with inflation hitting a 30-year high of 5.7% in February 2022.1

Despite all the bad news, we do believe that inflation could peak by summer, with pricing pressures beginning to ease as supply catches up to demand, economic growth moderates and the U.S. Federal Reserve (Fed) continues to tighten monetary policy. By the end of this year, we expect core inflation—as measured by the Fed’s preferred gauge, the personal consumption expenditures (PCE) price index—to fall to around 2.75%-3.0%.

A reading of 2.75%-3.0% would bring U.S. inflation back closer to the Fed’s target of 2.0%, and represent the beginning of a return to what’s typically considered normal levels of pricing pressures. But, what if we’re wrong? What if today’s high-inflation environment persists for several more years? What could the implications be for investors? Which asset classes might perform better than others?

While such a scenario is far from our base-care scenario of a moderation in inflation later this year, it can’t entirely be discounted, and seems appropriate to address from a just-in-case standpoint.

So, without any further ado, let’s dive in, starting with a look at how different asset classes have fared during prior periods of high inflation.

Which assets typically perform better during high inflation? It depends on growth.

Before we go any further, let’s make one thing clear: Inflation is not good for financial assets. Full stop. While skilled investors can achieve reasonable returns in such environments, in almost all instances, strong real returns are off the table.

That said, certain asset classes do tend to perform better than others on a purely relative basis. Which ones? Importantly, the answer depends on the type of growth environment that exists at the time—in other words, whether economic growth is high, medium or low.

To understand why, let’s take a look at the chart below, which shows the average monthly returns in six different regimes2—three marked by low inflation and three marked by high inflation. The three high-inflation regimes are broken down by the type of economic growth that was present at the time—high, medium or low. 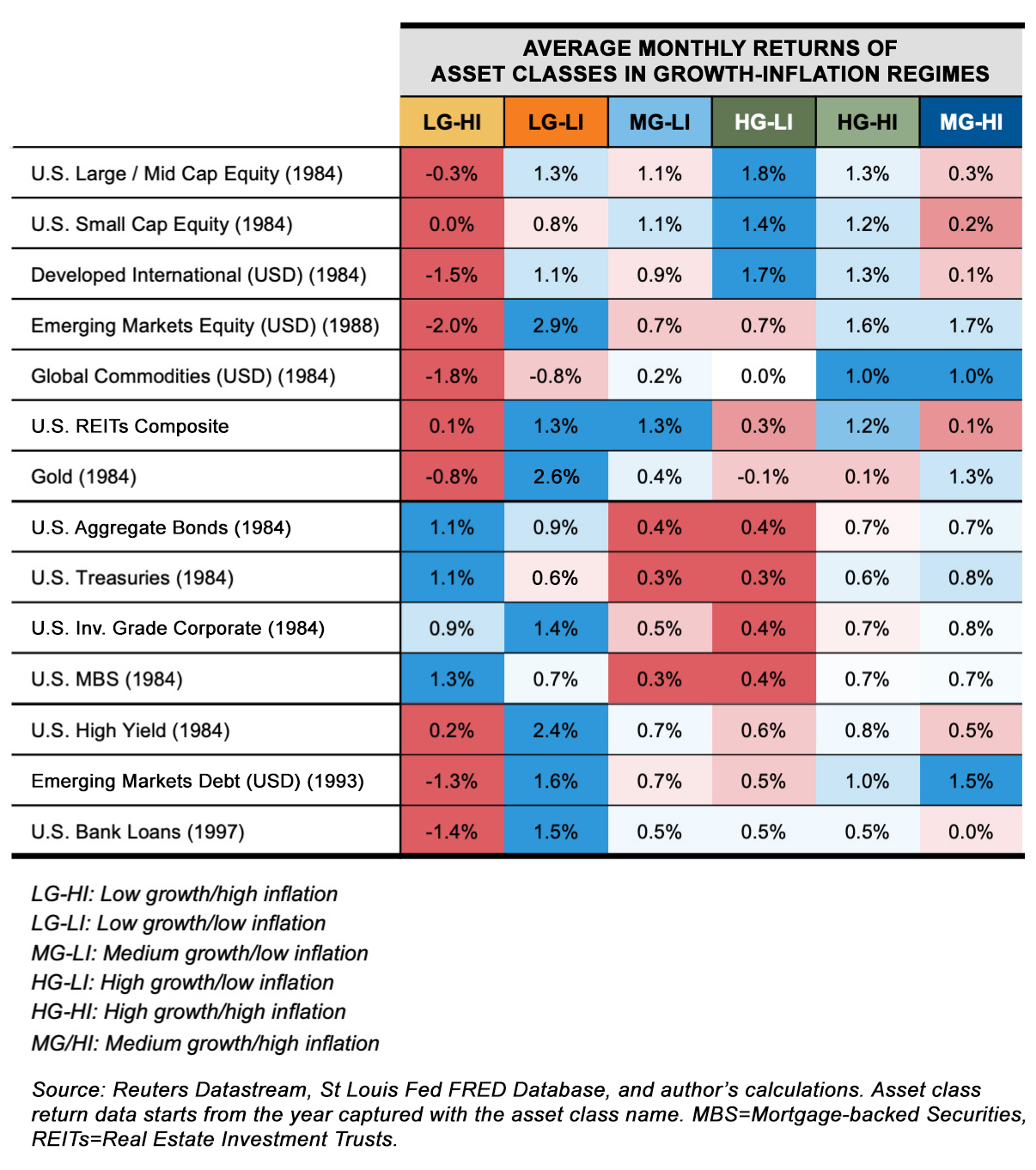 Low growth/high inflation: A bad environment for most assets

The first thing that jumps out is the dismal performance of most asset classes during periods of low growth and high inflation—otherwise known as stagflation. Since the mid-1980s, during these regimes equities have fared poorly across the board, with gold, global commodities and U.S. REITs (real estate investment trusts) also lagging. Only certain types of fixed income instruments, such as U.S. Treasuries, investment grade corporate credit and mortgage-backed securities have netted meaningful returns.3

To put it bluntly, in such an environment, there are very few places for investors to hide. The combination of low growth and high inflation is akin to a perfect storm—except there’s no escape route.

Perhaps not surprisingly, the chart shows that during high growth/high inflation regimes, asset-class performance was essentially flipped from what occurred during low growth/high inflation regimes. U.S. equities, developed international equities, emerging-markets equities, global commodities and REITS all averaged returns of 1.0% or higher, while Treasuries, mortgage-backed securities and investment grade credit saw their gains pared back. On the other hand, fixed-income instruments that fared poorly in the low-growth environment, such as emerging-markets debt and U.S. high yield credit, charted significant improvements.

If the results from this environment look familiar to you, it’s probably because they’re not too far from the typical performance we expect from equities and fixed income in the long run. This is because, over the length of a market cycle, equites tend to generate higher returns than fixed income.

The importance of factoring in the growth environment

Above all else, this chart demonstrates that during times of high inflation, a strong correlation exists between asset-class performance and the state of economic growth. Put another way, for return-seeking investors, growth conditions are just as important as inflation conditions. It’s simply not enough to only look at the overall performance of an asset class during previous high-inflation regimes—because that performance will vary substantially depending on what type of growth environment was present.

For investors contemplating changes in their portfolios today, this means understanding that a successful alteration in strategy requires correctly predicting the future state of two variables: inflation and economic growth. Nailing even one of these ever-shifting variables to a tee would be a rather tall order—but guessing correctly on both?

Consider, for instance, the example of an investor who is adamant that a low growth/high inflation regime is in store for the next 12 months (as mentioned above, we believe the probability of this outcome is very low). Taking a leap of faith and acting on this belief would mean moving a lot of money from equities to bonds—and the results could be damaging if growth comes in higher than anticipated or inflation becomes unhinged like in the late 1970s, hurting nominal returns on bonds more than equities. Investors should instead assess the downside risk from growth/inflation regimes that are determinantal to their asset allocation policy stance and, if needed, adjust for better risk management, to endure such periods of time without deviating significantly from their long-term investment goals.

A solid forecast of economic growth in addition to inflation is necessary to support asset allocation policy changes driven by inflation concerns. However, investors should carefully consider their confidence in the growth and inflation outlook. When inflation runs hot, so too can investor emotions—after all, the temptation to do something in the face of massive price increases is only natural. But for investors, even getting a handle on inflation is only half the battle. The other portion—projecting medium-term growth rates—is just as difficult. And with so much money at stake, are the downside risks from large asset allocation changes really worth it?

We don’t think so. Sometimes, it’s just best to keep calm, double-check the hatches and carry on.

2 We identify the regimes using a hidden Markov regime-switching model using CPI and real GDP growth. The low and high inflation regimes correspond to an annualized mean of 1.7% and 3.6% respectively. Similarly, the annualized means for the high, medium and low real GDP growth regimes are 4%, 2.3% and -0.25%.

3 If we look further back in history, these fixed income securities failed to protect portfolios when inflation was unhinged during the 1970s. REITs and commodities provided relatively higher returns.