Capturing the reward side of currency exposure: Lessons from Japan

The onset of the COVID-19 pandemic put an abrupt end to the U.S. interlude of interest rate normalisation. Meanwhile the European Central Bank and several European countries have continued to battle zero or negative interest rates. With rates likely to remain very low there may be lessons for institutional investors from their Japanese counterparts.

The policy rate in Japan first hit zero in 1999. In more than two decades since, Japanese savers and pension funds have been wrestling with zero rates on bank deposits and other cash investments. It is therefore no coincidence that investors in Japan have been intrigued by foreign exchange investments for a long time, with the archetypal housewife Mrs. Watanabe reported to be speculating in currencies with high interest rates.

Are there any lessons for American/ investors from the Japanese experience?

The first is that low interest rates can stay low for longer than most observers expect. Arguably, the three other major currency areas (the U.S., the eurozone and the UK) have already been in a Japanese interest rate environment for the last decade, barring the 2016-2018 normalisation. Japan's zero rate policy and quantitative easing has not caused a debt crisis and failed to generate any meaningful inflation. The stability in short-term rates and long-term bond yields may be attributed to the nation's demographics - which many advanced economies have in common with Japan - where an ageing population and a growing number of elderly savers prefers safe investments, helping to keep interest rates low.

To compensate for this low yield environment, many Japanese pension funds ventured into international stocks and bonds, hoping to diversify and capitalize on faster GDP (gross domestic product) growth elsewhere. While the case for international diversification is compelling, in our view, investors need to think about how to deal with the associated currency risk. 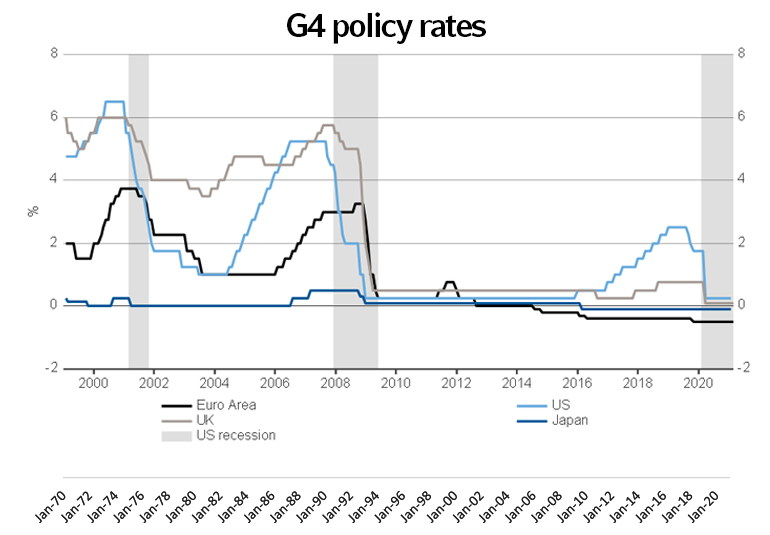 Often, the currency exposure from an investment is not an intentional choice expected to yield returns but the by-product of a decision to diversify internationally. Consider a U.S. pension fund which wants to invest in non-U.S. bonds. By allocating to the Bloomberg Global Aggregate excluding U.S. dollar index today¹, the pension fund implicitly holds a long position in a currency basket of 40% euro, 23% Japanese yen, 12% Chinese Renminbi, 9% pound sterling and the remainder in other currencies. Is that currency bet a conscious choice? Probably not.

Currency management is an frequently-overlooked aspect of multi-asset portfolio management. What is often not appreciated is that currency can present very attractive return characteristics, with little to no correlation to traditional asset classes. For this reason, investors can potentially add value by incorporating a currency overlay designed to deliver additional return and lower total portfolio risk. Because currency management is done using forward contracts and does not require upfront funding like traditional asset classes, the existing asset allocation can mostly be kept in place (with some additional capacity to raise cash when needed as forward contracts mature).

Why do return opportunities exist in FX markets?

We believe return opportunities exist in currency markets because a large group of participants are not motivated by profit and their need to transact is quite price-insensitive in the short term. Very diverse groups of individuals and institutions take part in the global foreign exchange markets: Corporations, commercial banks, equity and bond investors, currency managers, central banks and tourists. Participants can be broadly divided into three groups:

Despite the high average daily turnover in foreign exchange markets, the majority of the market's trading volume is estimated to be hedging activity related to corporate treasuries and asset management portfolios. Therefore, the smaller group of profit seekers can take advantage of the return opportunities in the market.

The second lesson we can learn from Japan is how some institutional investors manage currency exposure to convert unrewarded risk into a source of return. The process conceptually involves two steps: (1) hedging the foreign currency exposure from international investments back to base currency and thereby eliminating the incidental foreign exchange risks; and (2) tilting the currency exposure towards factors that we believe are rewarded with positive expected returns. In practice, the transactions from both steps can be netted and executed in one go.

The third lesson from Japan has been its more pronounced use of systematic currency factor strategies to capture additional returns. A number of characteristics can be used to describe the economic aspects of a currency, such as its interest rate, the cost of a basket of goods in that currency or its returns in the recent past. If these characteristics of different currencies can be grouped together, we can consider these economic aspects as currency factors.

There is ample academic evidence&spu2; showing that currency factors can offer meaningful, persistent and relatively uncorrelated return sources. Russell Investments believes that carry, value and trend are the three currency factors that are best placed to generate these positive returns at moderate volatility over long periods:

The carry, value and trend factor strategies are regularly applied to universes of developed-market currencies (DM), for example, the G10 currencies³.

While each of the currency factors, in isolation, has experienced periods of negative returns, these falls do not often occur at the same time across the three factors. As such, we believe there is a diversification advantage to investors in accessing a strategy that blends different currency factors.

During periods when bond yields rise and the yield curve steepens, the blend of currency factors can counterbalance negative returns in fixed income portfolios. While central banks may keep short-term rates very low, if the global economic recovery continues and long-term bond yields rise further, a currency factor strategy can be a good return source and diversifier to fixed income portfolios.

The Japanese experience with persistently low interest rates continues to this day and can offer valuable lessons for investors in other regions. Currency exposures from international investments are often not the outcome of an intentional investment decision and should be managed more deliberately. Hedging the incidental currency risk back to base currency can reduce risk. The potential gain in risk budget can be used to tilt currency exposures towards rewarded factors and enhance returns. Ultimately, we believe a factor-based approach offers a cost-effective way to access risk premia in currency markets.