The Fed cuts rates again. Is a pause next?

The U.S. Federal Reserve (the Fed) cut interest rates again today—its third such move in as many meetings—lowering its benchmark rate to a target range of 1.50% to 1.75%. At 75 basis points, the current easing cycle now matches the degree of insurance that the Fed provided around similar slowdowns in 1995 and 1998. This cut to overnight interest rates also serves to effectively un-invert the entirety of the Treasury yield curve and bolster the Fed’s confidence that its monetary policy stance is indeed accommodative, even when accounting for the headwinds from the China-U.S. trade war.

Bond yields, as evidenced by the yield on the 10-year U.S. Treasury note, moved higher in the minutes around the announcement. The biggest surprise driving the re-pricing in yields was the softening of forward guidance. Since June, the Fed has messaged that it will act as appropriate to sustain the expansion. This line was removed and replaced with blander language stating simply that the Committee will assess the appropriate path of interest rates.

Translation: The Federal Open Market Committee (FOMC) thinks its three rate cuts are now enough to push back against the downside risks from the trade war. The hurdle for further action from here is much higher.

Is a prolonged pause next?

Our baseline has been that the Fed would cut in July, September and October and then go on a prolonged pause. That baseline forecast, if anything, has simply been reinforced by today’s developments. When we consider the risks around this view, it still looks to us as though there’s an asymmetry, in that the Fed is more likely to cut than hike rates through the end of 2020. This thinking is motivated by two key insights: 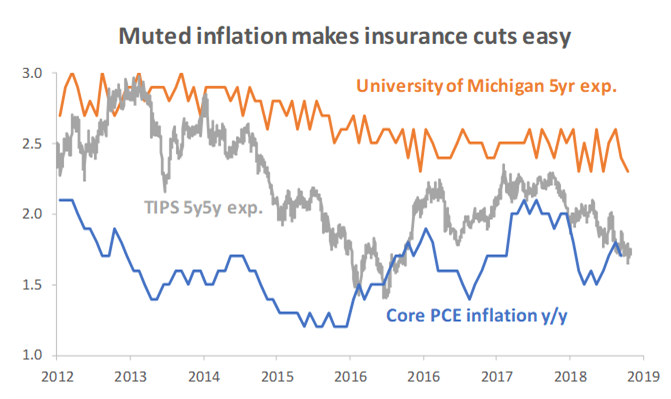 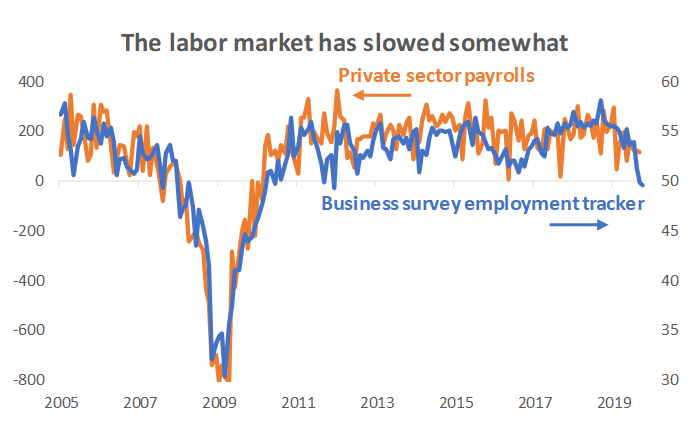 Source: Bureau of Labor Statistics, Russell Investments data as of October 30th, 2019. The business survey employment tracker is a custom composite indicator based on underlying data from Markit, the Institute for Supply Management, and the Federal Reserve System. Preliminary data for October is shown.

Considering these risks to the outlook, current market pricing on the near-term path for interest rates (i.e., one more rate cut through the end of 2020) looks broadly appropriate to us, even though our baseline is for the Fed to remain on hold. With the expansion entering its eleventh year, we still think government bonds have an important diversifying role to play in multi-asset portfolios.

On the upside, further evidence of progress toward a phase 1 deal between the U.S. and China, and importantly, an eventual removal of the tariffs that have been put in place, would be key to lifting the cloud of uncertainty hanging over the corporate sector and re-accelerating global fundamentals and risk markets in the year ahead.