To fear or not to fear the yield curve

Does the U.S. Treasury yield curve always foretell a recession?

With the spread between 10-year and 2-year Treasury yields down to just 17 basis points1, an active debate is raging among economists about the efficacy of the yield curve as a recession indicator in the current cycle. Historically, an inverted yield curve is a tell-tale sign of a looming economic downturn—and markets have certainly taken note lately, with the S&P 500® Index tumbling approximately 14% in the fourth quarter as the spread between yields sharply narrowed.

Provided the Fed continues raising rates in 2019, it’s quite possible that an inversion of the curve could occur this year. If this happens, history tells us that the U.S. economy could be at heightened risk of a recession in 2020. This is a warning signal that we believe should be taken seriously. To understand why, let’s delve into exactly what an inverted yield curve means.

Why economists use the curve as a leading indicator

Conceptually, an inverted yield curve tells us that the stance of monetary policy is transitioning into restrictive territory. In very simple terms, the U.S. Federal Reserve (the Fed) controls the short (overnight) rate, and the market prices the long (10-year) rate based on its view of trend growth. Therefore, when the curve inverts, it signals the Fed has moved short rates above what the economy can sustain in the long run. With monetary policy acting as a hindrance to growth, a recession becomes more likely.

The bulk of the academic debate around the efficacy of the yield curve currently surrounds the notion of the term premium. It’s important to note that a term premium is distinct from a term spread. This is because Treasury yields at any tenor can be broken down into two pieces:

Term premia cannot be directly observed. Instead they are estimated with term structure models.

Some of the arguments today centre on the idea that the yield curve is flatter than otherwise would be the case because of unusually low term premia—the implication from this being that an inversion may prematurely signal recession risk relative to the historical experience.

Let’s take a closer look at this argument.

“Historically the inversion of the yield curve has been a good [sign] of economic downturns [but] this time it may not,” because the normal market signals have been distorted by, “regulatory changes and quantitative easing in other jurisdictions…everything we see in terms of the near-term outlook for the economy is quite strong.”
–Former U.S. Fed Chair Ben Bernanke, July 2018

“I think that there are good reasons to think that the relationship between the slope of the yield curve and the business cycle may have changed…the fact the term premium is so low and the yield curve is generally flatter is an important factor to consider.”
–Former U.S. Fed Chair Janet Yellen’s final press conference, December 2017

These arguments are effectively saying that global quantitative easing (QE) leads to lower long-term U.S. interest rates—and that this will lead to a premature inversion that has little to do with U.S. fundamentals or the risk of recession. Conceptually, we believe the logic behind this is sound.

Based, in part, on this motivation, two staff economists at the Federal Reserve Board in Washington, D.C., recently published a note, entitled “(Don’t fear) the yield curve”. Their paper argues that, instead of the standard term spread, we should be looking at the 0-to-6 quarter near-term forward spread. In essence, this alternative indicator measures whether the market is pricing the Fed to cut rates over the next 18 months (something that usually happens in response to a recession). They argue that this indicator (green line below) is more intuitive, and they find that it statistically dominates the standard term spread when both indicators are included in a predictive model for recessions. Ironically, this indicator turned negative before the other, more-conventional term spread measures, as it logged an inversion on December 31st. Yikes! Nevertheless, we have a few concerns with this piece: 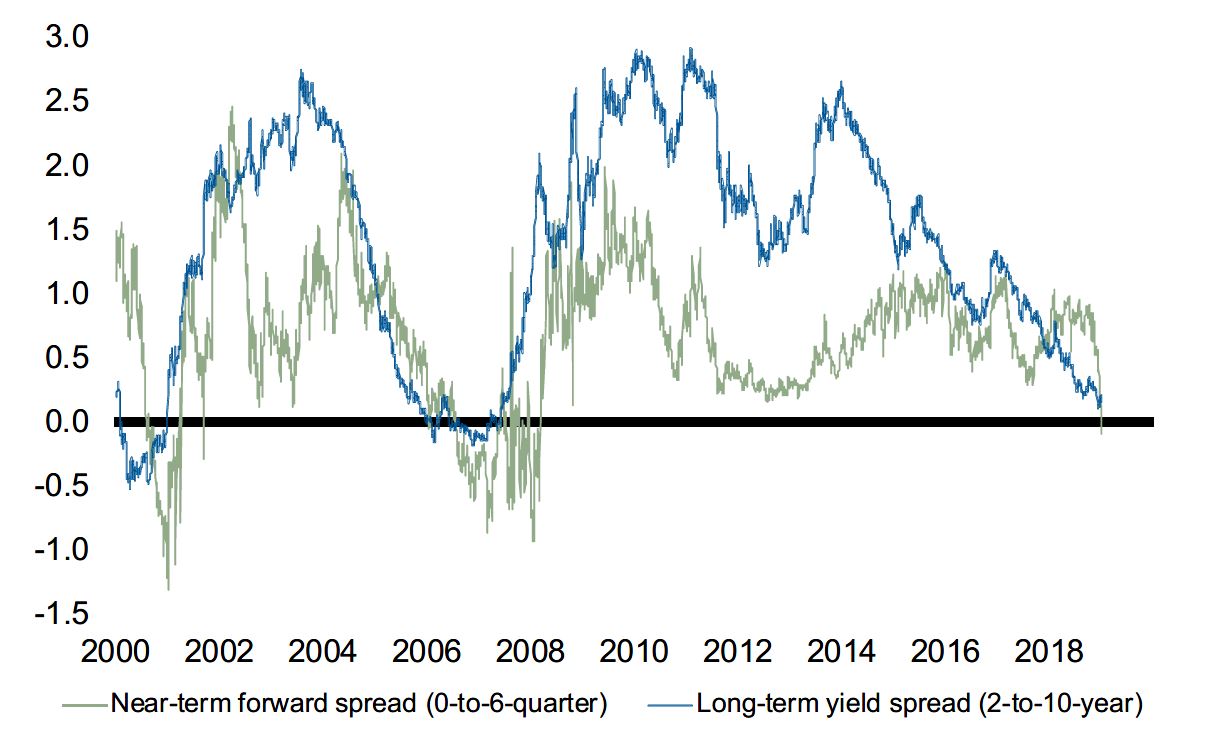 That said, we are not ignoring this study and take the recent inversion seriously in our overall risk assessment. We do, however, have a few reservations with using it as a major pillar of our market outlook.

Economists at the Federal Reserve Bank of San Francisco recently tackled many of the counterarguments to this in an empirical piece titled “Economic forecasts with the yield curve”. They used models to control for the fact that the absolute level of interest rates is much lower today than it has been in the past, and they decomposed the term spread into the expectations component of the path for short rates and the term premium.  In all cases they concluded that the predictive power of the term spread remains intact. Their conclusion:

“While these hypotheses have some intuitive appeal, our analysis shows that they are not substantiated by a statistical analysis that incorporates the suggested factors into the type of predictive models we use. For example, including both a short-term and long-term interest rate in such models—and thereby allowing the level of interest rates to have a separate effect from that of the term spread—shows that only the difference between these interest rates, the term spread, matters for recession predictions. Separating the term spread into risk premium and expectations components does not improve the forecast beyond using only the term spread…these findings indicate concerns about the scenario of an inverting yield curve. Any forecasts that include such a scenario as the most likely outcome carry the risk that an economic slowdown might follow soon thereafter.”

Obviously, there is risk in taking the results from a statistical analysis above the economic intuition of two former Fed chairs, but at the very least this stresses to us the importance of taking an inversion seriously from a risk management perspective in portfolios.

We can also check the signal from the curve by looking at the stance of U.S. monetary policy from other angles. The chart below plots the federal funds rate against our preferred estimate of the neutral rate of interest, and shows that U.S. monetary policy is getting very close to the point at which it turns restrictive. This is entirely consistent with the Federal Open Market Committee (FOMC)’s own discussions as detailed in its minutes from December. 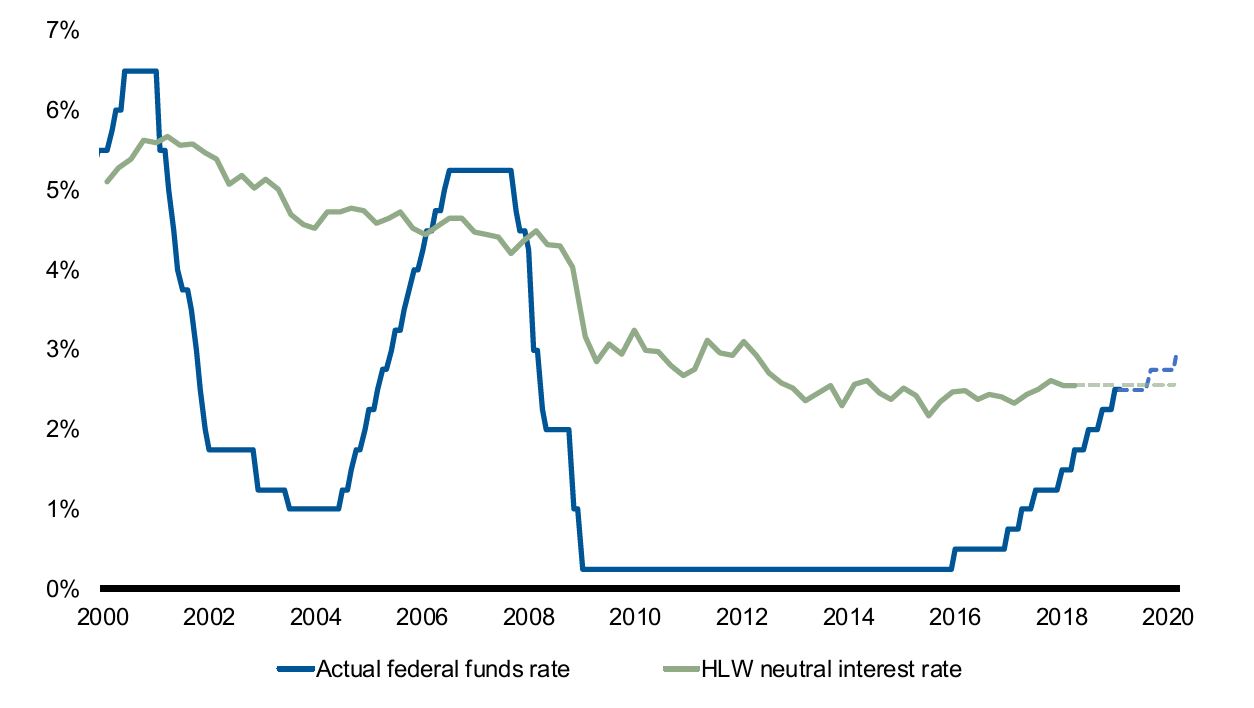 We’d also highlight the cautionary tales of economists mistakenly using the 'this time is different' argument with the yield curve in the past. For instance, Bernanke, who is in the don’t fear camp today, made a very similar argument about low term premia back in 2006. In 2006, the story was about excess global savings and Chinese demand for Treasuries (rather than the impacts from global QE, which is his argument today). But the conceptual underpinnings for his optimism in 2006—i.e., don’t worry—were similar to what he is basing his views on again today.

"For over two decades, researchers have provided evidence that the yield curve, specifically the spread between long- and short-term interest rates, contains useful information for signaling future recessions. Despite these findings, forecasters appear to have generally placed too little weight on the yield spread when projecting declines in the aggregate economy. Indeed, we show that professional forecasters appear worse at predicting recessions a few quarters ahead than a simple real-time forecasting model that is based on the yield spread."

To fear or not to fear the yield curve? Fear it.