Fed Announcement: Did Yellen get it right?

The market took a small step back today, with the S&P 500® falling by 0.8%. We believe the rate increase has been priced into the markets for some months now, due to a great deal of communication, stronger economic data, and a market-implied probability of a rate increase of more than 90%.

The surprise was that the Fed’s projections were upgraded to now show a forecasted pace of two to three rate hikes next year. In our view, however, the distribution of Fed forecasts indicates that Fed Chair Janet Yellen still likely favours a two-hike pace. And that’s important given her leadership role on the committee.

The last Fed interest rate increase happened in December of 2015. There were a number of market and economic setbacks in 2016 that caused Yellen to take a more cautious approach, including market volatility early in the year, sluggish Chinese growth, a weak U.S. employment report in May, and the surprise Brexit vote. But under the surface, the U.S. economy this year has been incredibly resilient. As of this writing, the U.S. unemployment rate hovers around 4.6%—the lowest rate since 20071. And positive inflationary pressures—particularly wage inflation (as shown in the figure below)—are continuing to build in the country. 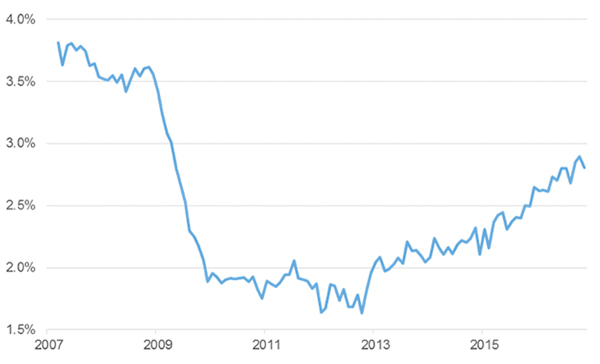 Under a Trump administration, what might happen when Yellen’s term ends in early 2018?

It’s too early to tell, but we’ll keep a close watch on who he nominates for the two currently vacant Fed governor positions.

See our 2017 Global Market Outlook - Annual Report for more information about what we expect next year.

1 Source: U.S. Bureau of Labor Statistics. December 9, 2016.
The S&P 500, or the Standard & Poor's 500, is a stock market index based on the market capitalisations of 500 large companies having common stock listed on the NYSE or NASDAQ.