The last several years have seen U.S. dollar hedging costs rise for many developed nation investors as a result of monetary tightening from the U.S. Federal Reserve (Fed). Particularly hard hit were those investors whose home currencies had been inflicted with negative interest rates (Figure 1). However, the pandemic-induced global recession has forced central banks all over the world to ease monetary policy to stimulate their economies. Having had significant room to cut, the Fed proceeded to slash interest rates towards the so-called zero lower bound. Consequently, interest rate differentials have collapsed, resulting in significantly cheaper hedging costs for many developed-nation investors. If we are at the beginning of an economic recovery from the Covid-19 recession, the countercyclical characteristic of the U.S. dollar may provide an even greater incentive for many investors to remain hedged or ratchet up strategic hedge ratios.

When investors hedge their foreign currency risk, they synthetically sell those foreign currencies and buy their base currency for future delivery, which can be achieved with the use of currency forward contracts. The forward points included in these contracts are effectively the premium or discount applied to the prevailing spot exchange rate in order to arrive at the expected future exchange rate. This "cost of carry" is based on the short-term interest rates of the two currencies, as stipulated by the covered interest rate parity "no-arbitrage" condition. So, as monetary policies converge, with the gap between short-term interest rates around the world narrowing, the change in the cost of carry in a hedging programme can have a material impact upon performance at a total plan level. 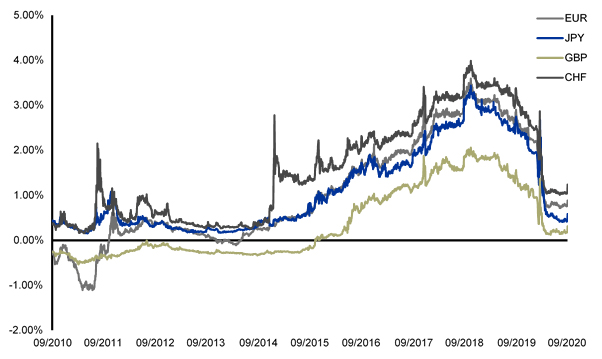 Let’s look at the monthly annualised carry cost paid by various global investors using a basket of currencies weighted according to the MSCI World index (Figure 2). It is clear to see that, over the past several years, European and Japanese investors suffered from rising hedging costs as U.S. monetary policy diverged from their own respective economies. These investors have tended to "pay carry" from passively hedging their MSCI World exposures back to their base currencies, given that USD denominated securities make up more than 60% of the index. However, the recent economic downturn forced the Fed to quickly lower the Federal Funds interest rate target as part of various measures instated to stimulate the economy. Subsequently, as at the end of September 2020, investors with base currencies of CHF, EUR, GBP or JPY are paying between 127 – 230 basis points less to hedge their USD exposures annually (Figure 1) relative to a year ago. 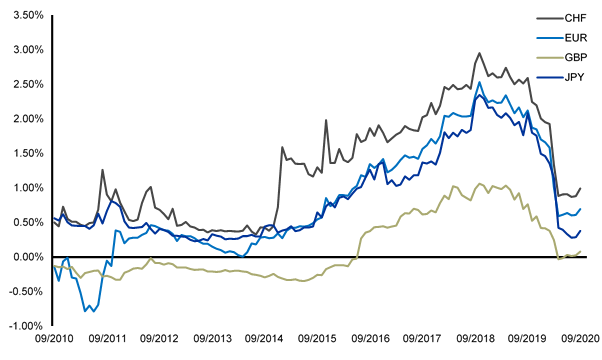 The shift in interest rates means that the option to hedge portfolios may now be more viable for many investors. And it is not limited to equity portfolios. International purchasers of U.S. treasuries may now allocate to this defensive asset while hedging its inherent USD exposure at a far lower cost. More important perhaps is the greater opportunity set available to investors. In fact, at points across the U.S. treasuries curve, certain international investors can benefit from higher U.S. treasury yields on a hedged basis compared to their respective domestic sovereign bonds (Figure 3 and Figure 4).

Given the relative stability of some asset classes compared to equities, the propensity of currency moves to elevate volatility can become heightened. Currency hedging tackles this directly, with the objective of protecting the investor from unintended or undesirable currency risk. While the reduction of carry costs is a significant improvement for hedged portfolios, there is of course no guarantee that currency hedging will produce higher returns in the future relative to an equivalent unhedged portfolio. Indeed, the dollar may strengthen by more than the interest rate differential over the lifetime of the hedging program. However, it is important for investors to affirm whether their foreign currency exposures incorporate their own directional currency views or otherwise represent a risky by-product of international investments.

Establishing a currency hedge can now be done very cost-effectively, at carry levels that have been unavailable for many years. The compression of the interest rate differentials between U.S. and developed nation interest rates is a compelling reason to assess the merits of currency hedging or reassess strategic hedge ratios, especially for European and Japanese investors. Meanwhile, a restarting of the economic cycle may be the opportune moment to do so.