In the second part of this series, we put the spotlight on the structural changes and shifting demographics in Japan that are coming to the fore and having real impact. We highlight the need-to-know aspects of the instrumental political, regulatory and investor-led reform taking place and explain how these are carving out multiple opportunities for investors within this space.

Read part one on corporate governance.

The ‘value factor’ is one of Japan’s oldest and most successful investment stories. However, we believe that that typical sweet spot of value investment in Japan has changed over the years, particularly following the Global Financial Crisis in 2008. Indeed, Japan has been the worst performing market globally for value stocks over the last decade. In our view, value is no longer the outstanding investment story of Japan. Instead, we think that a new investment opportunity can be found around the theme of aging.

Japan has the highest proportion of older adults (65 above) in the world.1 And it’s causing a serious bottle neck for the country and a lot of pressure on the young workforce. This is one of the main reasons why some investors might feel uncomfortable investing in Japan today. However, we think that aging - is actually a catalyst for change in the country and thus, an investment opportunity. Our view is twofold:

The cusp of change

A key concern for Japan is the critical labour shortage gripping many industries, as a result of more and more employees retiring. In an effort to help, the government amended their labour laws (which came into effect in April 2019) to improve working conditions by reducing hours, revising wage laws and annual leave rules. The hope is that employees less able to work long hours or more labour-intensive jobs (such as the elderly, parents/carers or disabled) will remain, enter or return to the work place. This is starting to become a major headwind for the traditional retail industry, who are struggling to keep up with the rate of change.

An indirect consequence of Japan’s shifting demographics is poor productivity levels – for example, the output of one worker in Germany equates to three in Japan for the retail industry (as seen in the chart below).2 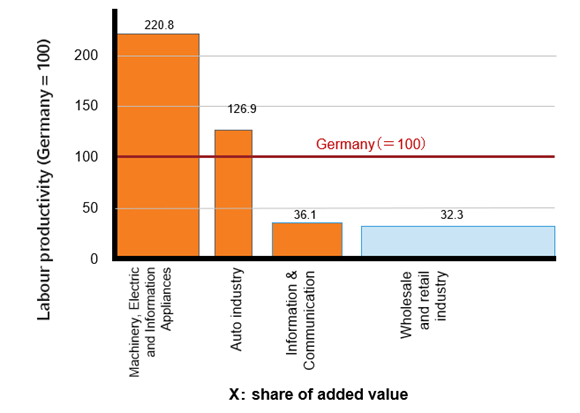 This is also due, in part, to the workforce’s traditional values and lack of vigor to change and adapt to new technologies. Culturally, Japan is notorious for being slow to change – never wanting to be the first or the last – and the aggregate workforce is no different. As a result, many archaic processes have been retained with businesses working without the internet, using fax machines and even cassette tapes – juxtaposing Japan’s reputation of being at the forefront of technology and the digital era.

This is not sustainable. Japan’s future prosperity depends on businesses adopting more efficient working practices so that they can continue to compete in the world economy. Thanks to Abe’s corporate governance reforms around family ownership and cross-shareholdings referred to in part one, more investment into business and new ideas are seeing meaningful changes. We believe that we are only on the cusp of change in this regard, and more is to come. This will likely see further improvements to corporate fundamentals, increasingly the opportunity for investors.

Businesses are also being pressured to improve their employment practices. For example, many younger employees have higher expectations and demands of their employers, including better pay and benefits. They, and Abe, are calling for businesses to modernise and align their approach with global peers to attract a new, younger workforce. This too is forcing businesses to change for the better, making them more competitive and attractive as investments in the long run. Plus, it is also is likely to see an uptick in workforce productivity.

Shifting demographics: It's now or never

Japan’s aging population combined with Abe’s reforms and new globally aligned standards feels as if we are on the precipice of change. Indeed, the degree of change appears to be underestimated by many investors and market players. For much of Japan, it’s now or never. We believe that together, these changes are going to turbo-charge development in Japan, contributing hugely to why we think it is a timely and attractive investment opportunity at the moment.