It's no secret: With U.S. valuations near historical highs and interest rates on the rise, we believe there may be better investment opportunities elsewhere. This is why we've consistently touted the potential benefits of a globally diversified portfolio--and why we'll continue to beat this drum going forward.

As I mentioned in part 1 of this blog post series, we have a preference for European and Japanese markets in particular--along with a neutral stance on emerging markets. In this installment, I'll recap our reasoning alongside Mark Eibel, our director of client strategies. As a reminder, you can also listen to the complete podcast version of this in our Deep Dive series, Beyond Borders: Why global diversification still matters.

We currently see an overweight opportunity in European markets. Why? Eibel explains that Europe today feels a lot like the U.S. five or six years ago, with zero interest rates, approximately 2% GDP (gross domestic product) growth and quantitative easing still in play through year's end. "I feel like I'm seeing the U.S. playbook from five years ago," he remarks, adding that the dividend yield in Europe stands at roughly 3.49%, while the U.S. dividend yield is approximately 1.85%.1

Interestingly, while there's been no shortage of political drama in both the U.S. and Europe, the market seems to be willing to see through the turbulence of politics in the U.S.--but not elsewhere. Whether it's the ongoing Brexit negotiations, debt problems in Greece or Italian budget woes, investors appear to be using politics as an excuse to not commit to or believe in Europe.

Why? One possible explanation is that the eurozone now comprises 28 countries, meaning that there's probably always going to be uncertainty somewhere in the region--a looming election, a disappointing economic data point, etc. Yet, when Eibel looks at the underlying fundamental and economic factors in the eurozone, he sees a market rife with opportunity. "At Russell Investments, we're very comfortable in a Europe overweight--and that means taking some money out of the U.S. and putting it into Europe," he says.

Emerging markets: More to the story

After a banner year in 2017, when emerging market equities rose approximately 37%2, it's been a rough stretch for the asset class of late. As of Oct. 31, 2018, the asset class is down approximately -16% on the year.3 Financial crises in Argentina and Turkey, coupled with a strengthening U.S. dollar and trade clashes between the U.S., China and other major economies, have taken their toll on emerging markets.

But, says Eibel, imagine for a second that the emerging markets label didn't exist. Imagine, instead, if someone simply asked you if you'd like equity exposure to 85% of the world's population. You'd probably say yes--and lo and behold, you'd be saying yes to emerging markets, along with frontier markets (which includes many African countries). Combined, the two account for 85% of the people on the planet.4 What's more, the International Monetary Fund forecasts that these emerging and developing economies will grow by around 4.7%-4.8% per year between now and 2023--with some of those countries experiencing growth rates of 6-10% per year. The U.S. economy, in contrast, is expected to slow from 2.5% in 2019 down to 1.4% in 2023.5

Emerging markets' connotations with volatility this year (and years past), however, have made it a tough sell. The ebb and flow of trade and tariff talks have fueled a series of volatile moves across markets throughout much of 2018, but the emerging market asset class has been negatively impacted the most. Why? "Because emerging market economies, led by China, are tremendous exporters--so when talks sour, or discouraging news makes the rounds, they take the brunt," Eibel explains. Europe is typically impacted the second-most, as the region is a big trading partner with many developing countries.

The U.S. tends to be a little more insulated from trade clashes, Eibel says, and this has been demonstrated by the comparatively stronger performance of U.S. small-market capitalization companies up until September 30 of this year.6 The end result? "The most expensive market has become more expensive this year, while the cheaper markets--those outside the U.S.--have turned even cheaper," he notes.

Could a U.S.-China trade resolution lead to an emerging markets rally?

Are brighter days around the corner for emerging markets? Eibel thinks this is a possibility, depending on how the trade impasse between the U.S. and China gets resolved. While the U.S. may have the upper hand on China from an economic standpoint--the spate of U.S. tariffs on Chinese imports appears to already be hampering growth there--politically, that's probably not the case, Eibel says. "President Xi Jinping effectively has a job for life, and also can act as the sole decision-maker for his country, whereas President Trump faces constant political pressure."

Because of this, there's an impetus for both countries to reach some sort of agreement, Eibel argues--and the best resolution will be one in which both U.S. and Chinese leaders can claim the winning hand.

Should this happen, he predicts that financial markets will react much like they have on days when there's been encouraging news on the trade front:

In other words, an exact reversal of how 2018 has played out so far is possible should the U.S. and China reach a truce--with emerging markets being the likely winner.

You probably live more globally already than you realize

Many U.S. companies have already been accessing global opportunities. For instance,

Added to that, there are a lot of companies that sell products in the U.S. that we think of as being American, but that are actually foreign. 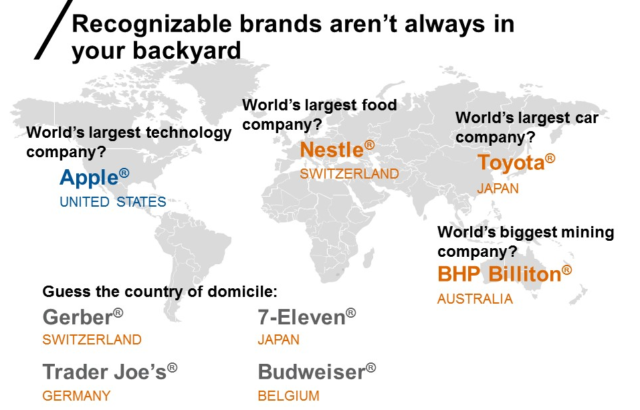 For example, the baby food Gerber® brand is owned by Nestle, a Swiss company. They also own Poland Spring water, KitKat chocolate bars, Nespresso coffee, Carnation milk, Dreyers and Haagen-Dazs ice cream and Purina pet food. I cringe when I imagine trying to live for even just a week without any of these brands!

So, while investors may have reservations about allocating a portion of their investment portfolio to non-U.S. companies--they are comfortable allocating a part of their daily consumption to the products those same companies make. Human psychology and capital markets are like oil and water sometimes--they just don't always mix seamlessly.

If a recession hits the U.S., will the downturn spread around the globe?

While we remain adamant in our belief that there's more opportunity to be found in Europe, Japan and emerging markets than the U.S., it would be foolish to ignore the old adage about America's impact on other parts of the world when a recession strikes. As the saying goes, when the U.S. sneezes, the rest of the world catches a cold.

Yes, it's absolutely true that economies and capital markets today are interconnected. If U.S. consumers stop buying Nespresso coffees or trade in their Lexus for a Prius, that will hurt Nestle and Toyota, respectively.

The historical data, however, is mixed on this topic. Of course, 2008--most vivid in investors' memories--had significant ripple effects across the globe. However, there have been exceptions, such as the late 1980s / early 1990s when Japan significantly underperformed the U.S. What contributed to that? Japan was trading on a multiple north of 50 and the U.S. was trading at a multiple of 12. It's gravity again... the higher you are, the further you have to fall. That's an important consideration. 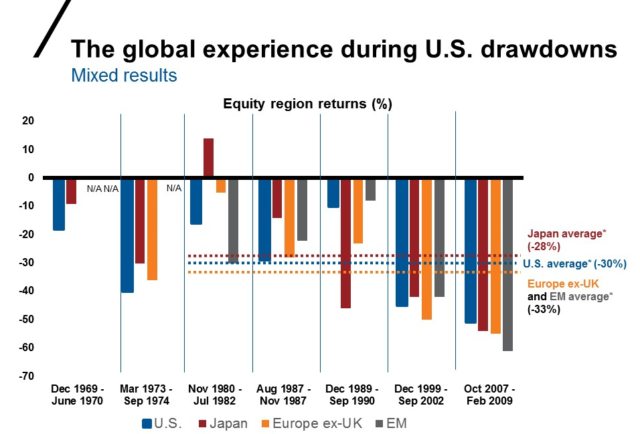 Source: U.S.: Russell 3000® Index. Japan, Europe ex-UK: MSCI Indexes in local currency: EM: MSCI Emerging Markets Index in USD. *Average return calculated for periods as of November 1980. Index returns represent past performance, are not a guarantee of future performance, and are not indicative of any specific investment. Indexes are unmanaged and cannot be invested in directly.

At Russell Investments, we believe recession risks are increasing in the U.S.--beginning anywhere from the late 2019 into mid-2020 period--roughly 12 months from the when the U.S. Treasury yield curve likely inverts. In the past 60 years, every time the slope of the yield curve--the difference between 10-year and 2-year interest rates--has inverted, a recession has followed within 12 months.10 Past performance is no guarantee of future results.

Signs are pointing toward the curve inverting as soon as early 2019, Eibel notes.

However, we aren't expecting the next recession to be as severe as the global financial crisis of 2007-2008 and given where non-U.S. valuations are today, we don't expect them to fall much further than the U.S., and they may even fall less than the U.S.

Ultimately, investing in the U.S. stock market just isn't what it used to be. Not only are U.S. equities expensive relative to other regions, they're expensive relative to their own history. That's why we see it as mission-critical to remain globally diversified, and to continue looking for opportunities in places with buy low, sell high potential. In other words, places beyond the U.S.

It goes without saying that stocks in Europe, Japan and emerging markets can be hard to own nowadays, as the market doesn't seem to be recognizing their strengths quite yet. Yet the fundamentals in these regions are strong--both now and forward-looking--when it comes to growth and demographics, Eibel says.

"Buying low is not easy," he remarks. "It's not instantly gratifying, like when you buy anything else on sale in other walks of life, and--truth be told--it can be a lonely path. But in investing, you don't tend to beat others by doing the same things as everyone else--or by doing what worked well last week, last year, or even in the last ten years."

Our parting thought? Help your clients have the discipline to stay focused on the long-term picture, and be willing to spread their eggs beyond the U.S. in order to potentially smooth out the ride. No one ever said investing was easy, but we believe a globally diversified portfolio remains the best way to help even out the bumps.

Missed Part 1? Read our blog post, or listen to the full podcast conversation.