Inflation has skyrocketed to 40-year highs. The U.S. Federal Reserve is in full-on tightening mode, with markets signalling as many as 11 rate hikes this year. The Reserve Bank of Australia (RBA) raised rates for the first time in more than a decade. And media outlets are starting to sound the alarm on potential recession risks for next year.

Amid this backdrop of increasing pessimism, investors may be tempted to respond by doing something in their portfolios—whether it’s dialing back on equities or increasing an allocation to fixed income. But we believe that making changes like these today would not be in their best interests. Instead, we contend that investors are better-served by standing pat and sticking to their strategic asset allocation and portfolio weightings for the time being.

Why? Simply put, at this stage of the game, there’s not enough information about what could happen to economies and markets down the line to be placing any sure-fire bets. Yes, there could be a recession in 2023, but the Fed could also engineer a so-called soft landing, where it slows growth enough to tame inflation without triggering an economic downturn. Or, the U.S. economy could still slip into a recession—but not until 2024. It goes without saying that each of these scenarios would likely have wildly different implications for both equities and fixed income—and betting heavily on any particular one could prove to be perilous when so much is still unknown.

The rate-hiking cycle kicked off in earnest in March, the same month that U.S. consumer prices increased at their fastest pace since December 1981. Since then, with report after report continuing to show inflation running at its highest levels in decades, the Fed has become increasingly vocal about its plans to aggressively bring pricing pressures under control, with Chairman Jerome Powell characterizing the fight against inflation as “absolutely essential.”2 Today, the proverbial rubber met the road, with the Fed instituting a 50-basis-point rate hike—the largest increase in the cash rate since May 2000.3 With the hike already priced in by markets, reaction in the wake of the announcement was initially relatively muted, with the S&P 500 Index climbing 0.4% and the yield on the benchmark U.S. 10-year Treasury note rising slightly. However, subsequent comments from Powell that a 75-basis-point rate-hike for June was not actively being considered sent equities roaring higher, with the Dow Jones Industrial Average closing over 900 points higher on May 4.

This time around, however, the central bank’s view is anything but balanced. The Fed has made it very clear that it does not consider a recession to be the worst-case scenario for the U.S. economy. The worst-case scenario, in the Fed’s mind, is persistently high inflation, à the 1970s—an outcome the central bank wants to avoid at nearly all costs. Essentially, this means that the Fed is willing to put the economy into a ditch in order to tame inflation. Put another way, the central bank’s primary goal today is to extinguish inflation, not prevent a recession.

Recession risks likely to rise in the second half of 2023

Locally, the Reserve Bank of Australia (RBA) raised the cash rate from 0.1% to 0.35% at the May meeting, marking the first interest rate increase in more than a decade. The board have now become comfortable that wage growth is sufficiently healthy to start normalising monetary policy. Looking ahead, the focus will remain on the labour market and wage growth – but the RBA have noted that they are now monitoring the economy to inform the timing and extent of rate increases, indicating that rate rises of more than 0.25% are potentially on the cards.

A general rule-of-thumb is that it typically takes 12 months or less for changes in U.S. monetary policy to work their way through the system and have real, demonstrable impacts on the economy. Assuming this time around isn’t any different, this means the impacts of the initial 25-basis-point rate hike in March would begin to manifest in the late winter or early spring of 2023, with the effects of today’s 50-basis-point increase showing up a month or two later.

Historically, another telltale sign of a recession is the inversion of the U.S. Treasury yield curve—where shorter-dated bonds yield more than their longer-dated counterparts. Because bond prices fall as yields rise, an inverted yield curve means that investors are selling shorter-dated debt in favor of longer-dated debt, reflecting waning confidence about short-term growth prospects. In many—but not all—cases, a U.S. recession occurs around 15 months after the yield curve first inverts. This lends some credence to the idea of a recession potentially beginning in the fall of 2023, given that the yield curve briefly inverted in March, when 10-year yields fell below two-year yields. While this segment of the curve has since un-inverted, the spread between the two remains quite narrow, at 16 basis points.4

To reiterate our point from the beginning of this post: No. Recession forecasting is not that clear cut. Uncertainty is high and it might still be too early to get overly defensive. Equities typically sell off about six months in advance of a recession’s onset5, which suggests that stocks may not begin to truly tumble until next March IF a recession does begin in the fall of 2023. In other words, de-risking now could mean forgoing nearly a year’s worth of reasonable equity returns. Case-in-point: The average return for equities in the year leading up to a recession is 6%.6 And what if the recession doesn’t set in until 2024? What types of gains could be missed out on then?

Let’s broaden this argument out a bit by looking at how equities have historically performed during times of rising rates. The chart below shows the total returns during previous Fed tightening cycles dating to 1976, broken down by stocks, bonds and a typical 60/40 stock-bond portfolio. 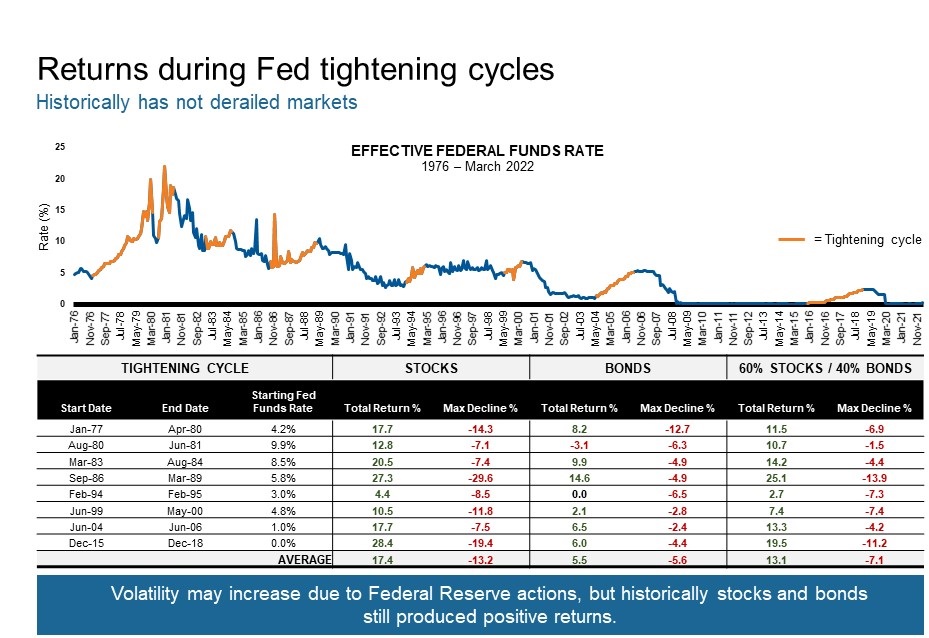 As the chart shows, the average total return for equities over the past eight rate-hiking cycles was 17.4%, with 5.5% for bonds and 13.1% for a 60/40 portfolio. And while there certainly was some volatility (as shown by the maximum-decline-percentage column), most cycles yielded positive returns for both asset classes. Perhaps even more significantly, we’d add that the average return on the S&P 500 (not shown on the chart) during the first year of a rate-hiking cycle is roughly 7%.7