The U.S. dollar (USD) plays a vital role in global finance. It functions as the world's reserve currency and is the currency of choice for international commerce. As Figure 1 highlights, nearly three–quarters of global non–bank lending debt is denominated in the USD.

Its primacy in global trade also necessitates foreign central banks to hold the USD as part of their foreign exchange (FX) reserves. In fact, 60% of global central banks' foreign exchange reserves are invested in the USD as Figure 2 shows. The Euro is a distant second at 20%. It’s noteworthy that despite China's economic ascent since 2000, the Renminbi's (RMB) share of global FX reserves is only 2%. While it's reasonable to expect the RMB and other high–growth nations' currencies to continue their advance, it seems clear that the USD's reserve currency status is secure for the foreseeable future. 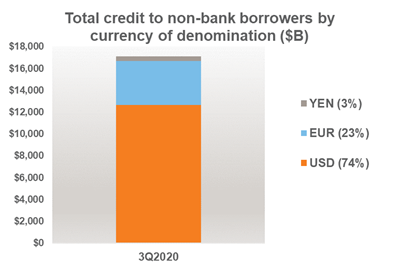 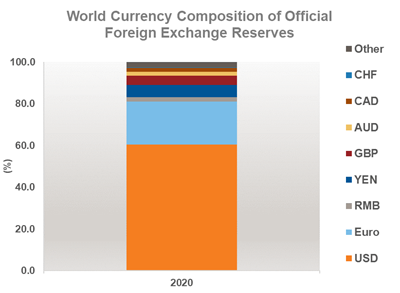 The USD's wide acceptance for international commerce makes it a highly sought–after currency, especially when economic conditions are deteriorating. For this reason, it's said the USD is a counter–cyclical currency, meaning it trends in the opposite direction of the business cycle: strengthening as the business cycle slows and weakening as the economic outlook improves. This inverse relationship is illustrated in Figure 3. A weaker USD corresponds with improving global growth, while a stronger USD suggests a slowdown in growth.

If we consider that USD weakness suggests an improving global business cycle, then it's reasonable to expect that would favor international equities over U.S. equities. This makes intuitive sense. As the USD depreciates, global financial conditions ease. This is in part because servicing US–denominated debt, of which there is plenty as shown in Figure 1, becomes a little less onerous. The relationship between the USD and U.S./international equities relative performance is illustrated in Figure 4. As suggested, a depreciating USD trend generally corresponds with international equities outperforming the U.S., and vice versa.

Figure 4 also shows that U.S. equities have steadily outperformed international equities (which do not include U.S. equities) since 2008. Due to the higher concentration of cyclical sectors like financials and industrials, international equities benefit from accelerating economic activity. However, that has not been the case for some time. The global economy started to lose momentum around mid–2018, suggesting the economic expansion had transitioned into the late stage. Economic growth was ultimately punctured by the pandemic–induced global recession. As such, the business cycle backdrop of the last three years disproportionately benefited the U.S. stock market for three main reasons.

First, the U.S. has a higher allocation to growth sectors linked to technology and health care, which benefit as economic activity slows—this was the environment before the pandemic. Second, Covid–19 is a health care crisis that effectively chocked mobility to varying degrees—this has been our reality since the pandemic started. The culmination of these scenarios has been a tremendous force boosting U.S. equities relative to international.

With that said, we believe U.S. equity outperformance has mostly run its course. The global economy quickly transitioned from the slowdown of 2018 to 2019 into a deep but short–lived recession in 2020 and is now early in an economic recovery. Moreover, a recuperating business cycle suggests USD weakness ahead. Together, these trends favor international shares over U.S. shares.

It is also worth mentioning factor performance, specifically growth versus value. U.S. large–cap growth has been a winning trade, and even more so since the pandemic began. We believe that could change with the reopening of the global economy. The value factor has a high allocation to cyclical sectors, which have lagged miserably but now possess significantly better valuation versus their growth counterpart.

As Figure 5 illustrates, based on the price–to–earnings (PE) ratio, the value factor has not traded at such a striking discount to growth since the dot–com bubble of the late 1990s. Additionally, the value factor is bolstered by encouraging business cycle trends over the next 12–18 months. Coincidently, the rotation away from growth and toward the value factor also supports international equities due to their more significant cyclicality.

Source: Refinitiv DataStream, Russell Investments. As of January 2021.
The Price–to–Earnings Ratio (PE Ratio)  compares a company's current share price to its earnings per per share. The graph shows the relative value of growth stocks compared to value stocks in the MSCI World Index.