Emerging Markets (EM) are a hot topic for investors. In the first of three blogs, Senior Investment Strategist Graham Harman reviews the case for long term value in EM equities. His next blogs will examine where the risks are for this asset class and discuss whether now is the right time to buy.

Emerging markets equities offer good value for investors with a longer-term time horizon. They are unloved from a contrarian standpoint and there is some evidence of an improvement in cycle factors such as profits growth, policy easing and economic growth. However, there are still headwinds from lacklustre growth in the developed economies and China’s debt problems. The outlook for EM asset classes is turning more positive, or at the very least, less negative.

EM equities kicked off the “Asian century” in fine form. Stellar performance saw the asset class lift its share of the global all-country equity indices dramatically, from just 5% in the year 2000, to nearly 14% by the end of 2010. “Emergence” was to prove vulnerable to growing pains however. Currency and governance crises, commodity price downdraughts, a strong US Dollar and - in some emerging nations - outright recession, have taken their toll. By the end of 2015, EMs’ share of the global pie was back in single digits, and the MSCI emerging market index was down 45% from its 2007 highs.

Now, as 2016 unfolds, EM equities are finding their feet. In this note, we look at the reasons for this incipient turnaround in performance for the better; we examine the value proposition that EM offers in what is otherwise an investment landscape almost entirely devoid of value; and we point to developments in the global investment landscape that are establishing a much more fertile basis for ongoing strength. 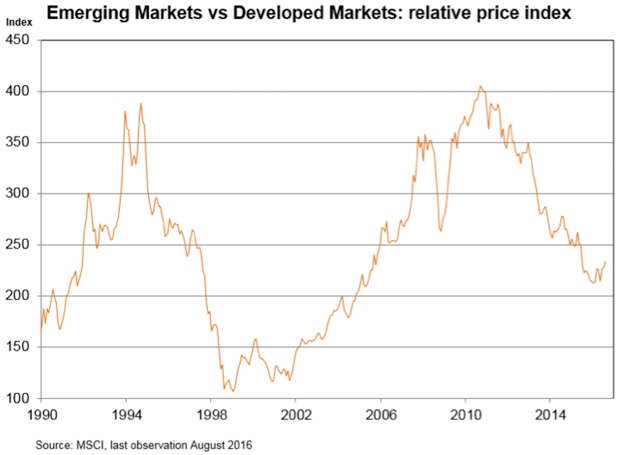 The fundamentals are changing in EM this year on a range of fronts. One thing that has been a constant over recent years is its standout value. With near-zero cash rates in much of the developed world and around a third of developed market bonds offering negative interest rates, it doesn’t take much to be “less bad” in the value department. But EM equities offer good value on a stand-alone basis, for example:

Seasoned EM watchers will note that the EM “Value” story has been with us for at least two or three years now, and index performance has been lacklustre. Reasonable questions include:

We’ll examine the first of these questions in a companion article which looks at risk. A key point we can note straight away is that although concerns about EM indebtedness have been with us for a number of years, we draw some confidence from the fact that most of these economies have survived a battery of downbeat growth, over an extended period, without serious mishap.

The second question will also be examined in greater detail in a subsequent note. The key to the “why now” question is a combination of policy easings across the emerging world in combination with a firming earnings story.
There are two more points to note about EM value, under the header of “firmer foundations”.

First, EM are still under-loved and under-held by investors. A survey in June 2016 by Bank of America / Merrill Lynch found investors to be more bearishly positioned in EM equities, than they would expect to be about three-quarters of the time. That type of positioning is a solid bulwark for value, because it means potential sellers have by-and-large been shaken out.

Second, it pays to check on profit margins before relying too heavily on standard valuation metrics such as Price-Earnings ratios. In the US equity market, for example, where forward PEs are high at 17x, profit margins are also high (over 10%), and fading in recent months. That’s the opposite of the EM experience, where an asynchronous commodity cycle has seen margins drop to nearly 6% - and the latest evidence, suggests incipient signs of a bottoming. 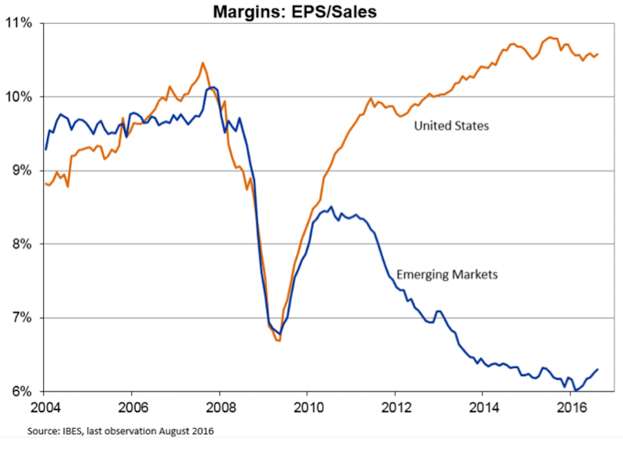 Taken together, the EM equity story looks increasingly robust, offering genuine value across the full suite of measures. And that’s an eye-catching story, in a world where US equities are looking pricey and a growing number of bond investors are receiving negative interest rates.