Why we (and others) like Emerging Market currencies and bonds

After years of difficulties and underperformance, Emerging Market (EM) assets have the makings of a turn-round. In this blog, we focus on EM currencies and bonds. We explain our long-term positive view, using our appraisal process focusing on the business cycle, asset valuation, and investor sentiment (Cycle, Value and Sentiment or CVS). We also review our new investment manager survey data which shows managers becoming significantly more positive on EM currencies and Local Currency debt. EM Equities? Our colleague Graham Harman will be featuring these in a series of blog posts coming up shortly.

In recent years, EM economies have been weighed down by a number of damaging developments. These include large current account deficits, persistent inflation pressure, political turmoil, and lacklustre productivity growth. As most EM countries have freely floating exchange rates, currencies were the first to feel the pain from the deterioration in economic fundamentals. Falling currencies have a negative impact in the short term, pushing up inflation and forcing central banks to raise interest rates despite the weak growth environment. In the long term, however, weaker currencies facilitate the adjustment in EM countries’ balance of payments, either through higher exports or lower imports.

This year, we have seen a clear improvement in the economic fundamentals of EM countries coming through. We at Russell Investments think that this improvement could set up the currencies and government bonds of EM countries for a prolonged period of better performance. The asset class mostly likely to benefit from the turnaround in EM economic fortunes is local currency emerging market debt 1. The latter consists of bonds issued by the governments of EM economies in their domestic currencies, including the Brazilian Real, the Mexican Peso, the Russian Rouble and the Turkish Lira.

Granted, some of the headline news from these countries is still disturbing, not least the recent coup attempt in Turkey and the spread of the Zika virus in Brazil. Some political and social developments have a significant impact on economic performance and financial asset returns while others are immaterial. Timing this volatile asset class perfectly can be difficult, and notable risks include a stronger than expected US dollar/faster than expected US rate rises, a China hard landing, and further falls in commodity prices.

To separate the important from the irrelevant variables, we analyse all asset classes through the lens of Russell Investment’s CVS framework. Let’s look at what this approach tells us about the prospects for local currency EMD right now.

Our valuation measures suggest that local currency EMD as an asset class is attractively priced compared to history.

There are two important components to the valuation of local currency EMD: (1) currency and (2) bond. Currency is the more volatile and important part. We believe that EM currencies have declined sufficiently, as measured by their inflation-adjusted trade-weighted exchange rates, to be significantly undervalued. Over a 3-5 year horizon, EM currencies are more likely to be stable or stronger against the US dollar, the euro and the pound.

Turning to the valuation of the bond component, the yield-to-maturity of the JP Morgan GBI-EM Global Diversified index is at 6.25% as of 31 July. This is somewhat below the average yield since 2004. However, we prefer to look at the difference between the inflation-adjusted yield of the EMD index and the G3 economies, i.e. the US, eurozone and Japan. According to our own calculations, the real yield difference is around 3% and therefore at the upper end of its range since 2004.

We are neutral on the Cycle for LCEMD as recent favourable developments cancel out longer-term structural weaknesses.

Leading economic indicators in EM economies have drifted up in recent months, signalling better growth dynamics in the second half of 2016. Inflation is slowing in countries such as Brazil or Russia. This is positive for the currencies and growth, allowing central banks to cut the rates from a high level. Importantly, balance of payments dynamics are also encouraging. As of the first quarter of 2016, the weighted average EM current account deficit has shrunk from 2% to 0.6% of GDP2.

On the negative side, we are wary of the potential risks from a pronounced slowdown in China on EM assets and interest rate hikes by the US Fed. So far, current account improvements have been driven by declining imports. We would like to see EM country exports picking up before becoming more enthusiastic about the Cycle of LC EMD.

As of 4 August, our momentum indicators are clearly positive for the asset class while our contrarian indicators do not signal that it is “overbought”. In other words, there does not seem to be excessive exuberance for Local Currency EM bonds.

Perspectives from other investment managers

Through Russell Investments’ manager research process, we also have a unique perspective on the asset class that few market participants have access to. Throughout our meetings with managers in the EM debt space in 2015, while value of currencies was always acknowledged, there was still a view that EM currencies could have another leg down due to various factors, including further US dollar strength from a Fed rate hike, lack of clear improvements in fundamentals, and collapsing energy prices. Additionally, RFPs for local EM mandates were virtually non-existent.

However, conversations started to shift at the end of 2015/early 2016 on the back of a negative 15% return in 2015. The underperformance pushed currencies further into attractive territory and, as mentioned at the beginning of this blog, facilitated an improvement in the trade balance data – typically the biggest determinant of the current account balance. Instead of seeing a consensus negative view on currencies, we started to see managers allocate to EM FX, the very source of painful volatility and underperformance for four out of the last five years. The non-existent RFP activity we observed in 2015 improved so much so that EM are now driving RFP activity for many fixed income managers.

Wanting to understand the shift in sentiment towards the asset class, in the middle of July 2016 we issued a survey receiving 21 responses by the end of that month from some of the most prominent investment managers running EM debt assets. We’d like to share some of the highlights of the survey, which we find quite interesting.

First, within the EM debt asset class itself, managers are starting to prefer the local currency benchmark over the hard currency (USD denominated) benchmark. Over the next one year, about 70% prefer EM local debt. 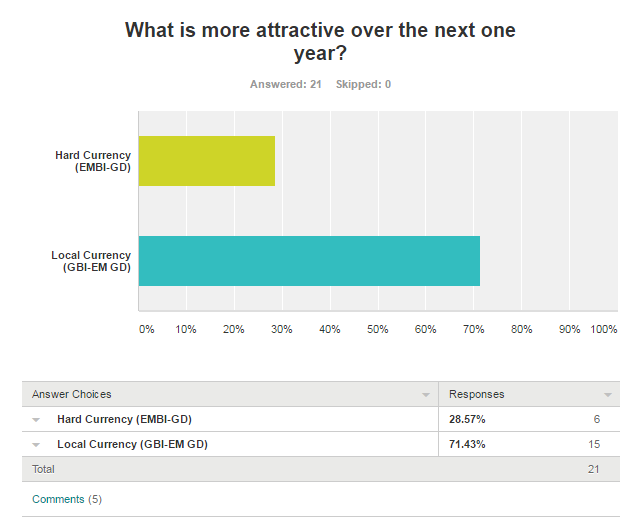 What is more pronounced is the shift when managers addressed the same question but on a three-year horizon. Managers unanimously agreed that local currency debt is more attractive than hard currency debt over the next three years. Russell Investments does acknowledge that a higher expected rate of return is required from EM local debt due to the higher volatility versus hard currency debt, but even when adjusting for the volatility, we (and managers) believe the Sharpe ratio is finally becoming appealing again.

While acknowledging the attractiveness of EM FX valuation, for various reasons most managers have still remained slightly underweight EM FX in 2016 and have lagged the commonly used JP Morgan GBI-EM Global Diversified Index when currencies have rallied. Judging from below, however, managers are beginning to shift their views, seeing EM FX as a slight positive over the next one year. 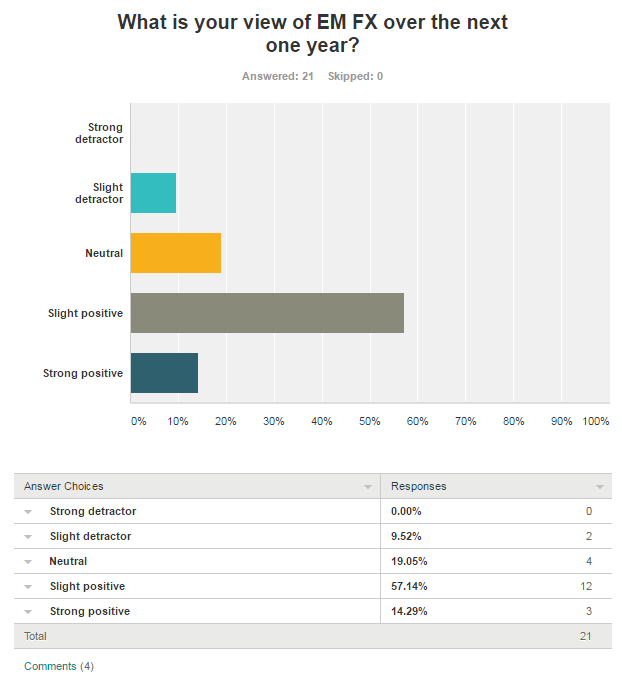 Similar to the previous shift we saw in the one-year view versus the three-year view, managers unanimously see EM FX as a slight to strong positive over the next three years, with two-thirds believing it should be a strong positive contributor.

With managers believing inflation is neutral to trending lower, this should also help steady the interest rate component of the return. 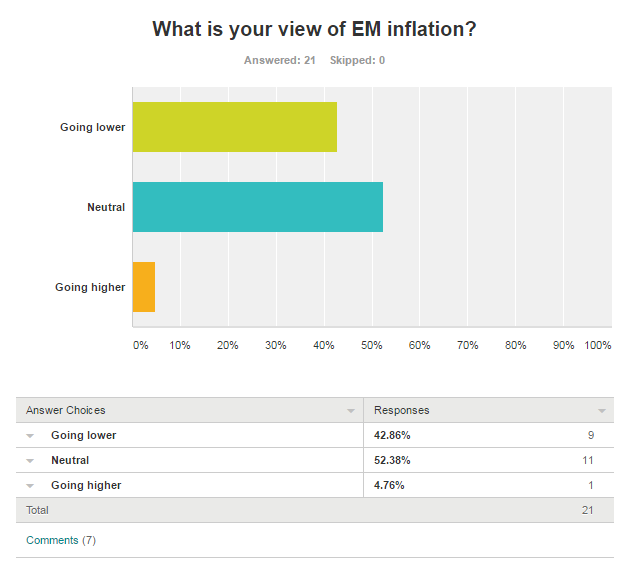 Overall, we believe that despite potential setbacks, the longer term picture for EM currencies and Local Currency Debt is positive. Relative to developed market bonds the risk-reward of Local Currency Debt is now favourable. Timing the right entry point is always important and difficult, but the main message from our CVS process is that we want to own these assets.