Much ado about inflation

Many pension schemes index the pensions their members are due each year by inflation. A lot of schemes will use the Retail Price Index (RPI), some will use the Consumer Price Index CPI and others will use both. In September 2019 a letter was published by the Treasury in which the chancellor responded to a recommendation from the UK Statistics Authority to align RPI with CPIH (a measure of CPI which includes home ownership costs). We dissect the purpose of inflation and explain what these changes could mean for pension funds today.

The truth behind inflation

Ronald Reagan once described inflation as “violent as a mugger, as frightening as an armed robber and as deadly as a hit man”. So, what actually is inflation? Inflation measures the change in price of a basket of goods over time. During the oil shocks of the 1970s inflation in the UK reached over 25%. To put that into context, imagine going to do your weekly shop and when you do the same shop a year later where you buy exactly the same goods it costs a quarter more than what you paid for them 12 months prior. Assuming your wages hadn’t increased by the same amount over that period (and the total cost of goods and services had increased by 25% across the board) you’d actually be worse off even if you had been given a meaningful pay rise of say 10 or 15%!

For this reason, governments and central banks often focus their fiscal and economic policies on maintaining inflation at a manageable level. These institutions generally aim to keep inflation at a modest level to incentivise people to spend most of their money today. For if inflation becomes negative people may put off buying goods in the expectation, they will be cheaper tomorrow or next year, which would obviously have dire consequences on economic output. Conversely, they also don’t want inflation to get out of hand as that could result in people feeling poorer and in a worst-case scenario potentially cause social unrest. These are two of the reasons why the Bank of England has a mandate to target inflation at 2%.

So how is inflation measured in practice?

The Office for National statistics (ONS) has a basket of representative items which it uses to monitor inflation. Each year the ONS reviews the constituents of the basket and updates this accordingly. In 2019, the Hi-Fi was removed from the basket and replaced by smart speakers and washing powder was replaced by washing liquid / gel (both of these changes were made to reflect the change in consumer habits).

The ONS then calculates inflation using two different approaches. The first is known as the Retail Price Index (RPI), which was introduced in 1947 and was made the UK’s official inflation measure in 1956. The second, the Consumer Price Index (CPI) has been used by the Bank of England for managing its inflation target since 2003.

As can be seen in the chart below, through time RPI has consistently been higher than CPI by c.1% p.a (see the black line). 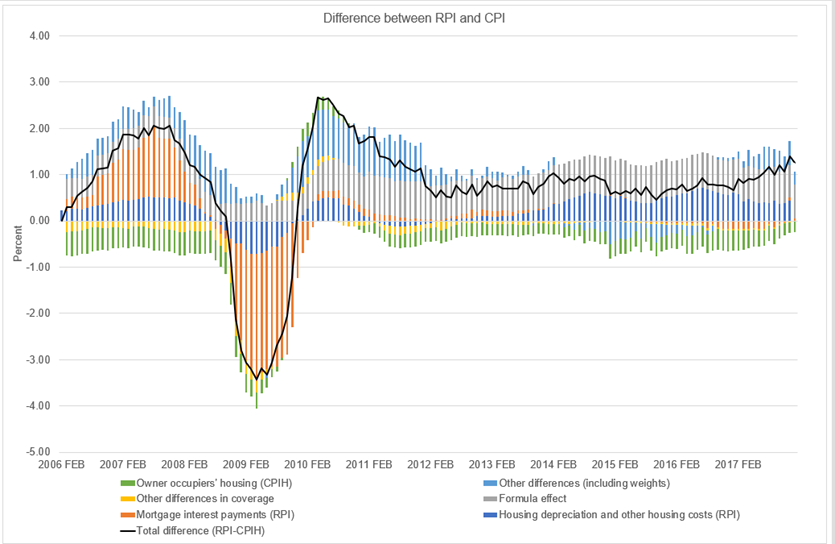 As can be seen from the chart, there are a number of reasons why RPI has been consistently higher than CPI over time. One reason is down to how RPI is calculated, the so called ‘formula effect’. Another is due to different weights being applied to the underlying goods which are included in the inflation basket. Having multiple measures to calculate inflation is clearly sub-optimal and the government would prefer to only have one inflation measure in circulation. The ONS has written multiple papers stating the shortcomings of RPI and the UK Statistics authority has been vocal in stating its desire to review the current arrangements.

In September 2019 a letter was published by the Treasury in which the chancellor responded to a recommendation from the UK Statistics Authority to align RPI with CPIH (a measure of CPI which includes home ownership costs). The Chancellor confirmed he would not approve this proposal prior to 2025 (as that would require primary legislation) but would hold a consultation on whether this change should be made at any other date than 2030, which is the date at which the UK Statistics Authority has the power to implement this change. In essence, the consultation will consider whether this change should be adopted between 2025 and 2030.

Why does this matter for pension funds?

Many pension schemes index the pensions their members are due each year by inflation. This is being done so members retain their purchasing power and hence trying to stop them ‘getting poorer’ as the price of goods gradually increases over time. Some schemes will use RPI for these calculations, some use CPI and there are occasions where schemes will use both - yes, it does get a bit confusing. If members have previously been promised RPI linked increases and RPI is aligned with CPIH then the reference inflation measure will be c.1% p.a. lower per year and the increases will be less.

From an investment perspective, many pension schemes also hold index-linked gilts which promise a stream of payments which are uplifted by inflation. To date the treasury has used RPI as the reference inflation measure. If RPI were to be aligned with CPIH then investors holding these assets can expect to receive a lower stream of payments, than they previously thought. However, when an investor buys government bonds, they expect a certain stream of payments which are pre-agreed at the point of purchase. If the goalposts are seen to be changed at a later point in time (i.e. by changing the inflation measure from RPI to CPIH) then it causes a number of difficult questions to be asked, including whether this is viewed as the government reneging on what was originally promised.

How has the market responded to this?

It can be quite difficult to ascertain the exact impact of this development on the price of Index-linked gilts given so many other factors which go into pricing these bonds on a daily basis. That said, within the derivatives market it is possible to look at what the market expects RPI inflation be in future. The chart below shows what the derivatives market is expecting inflation to be for the next 10 years (navy blue line) and the following 10 years (i.e. the light blue line shows the market’s expectation for RPI from 2030 onwards, which is after then the proposed transition to CPIH would be implemented).

From the above chart it is clear that prior to July 2019 the market was expecting RPI inflation for the next 20 years to be broadly similar. However, between September and January there was a big change in what the market expected RPI to be from 2030 onwards, one could argue this was the market expecting RPI to be aligned with CPIH and hence the holders of inflation swaps (which reference RPI) or indeed the holders of index-linked gilts losing out.

Since the start of 2020 the difference between these future expected RPI inflation rates has come in significantly. Perhaps that suggests that the market is expecting some sort of further development or even some form of compensation to be paid to investors who have previously entered into RPI-linked investments (i.e. agreeing to pay CPIH plus some additional margin going forward). Whilst it is not clear what is currently being priced in by the market it will be interesting to see how the market’s view of future inflation changes as the consultation is carried out and when the final findings are published.

What should you do?

First and foremost, we would suggest speaking to your Scheme Actuary as it is important to understand how sensitive your scheme’s liabilities are to RPI and CPI. Your investment consultant or fiduciary manager will also be able to tell you how much of your portfolio is invested in index-linked gilts. Once you have this information for both the Scheme’s liabilities and assets you can then consider the options available to you and whether any action is required.

We would also encourage investors to respond to the consultation which will run between 11 March and 22 April. This will allow participants to provide feedback on the proposal to align RPI with CPIH and the timescale around when this change is likely to be implemented.