Why a rising retirement age isn’t necessarily a bad thing

The run up to the 2016 budget hasn’t been short of noise, conflict and controversy. Whether the now abandoned Pension ISAs or moving to a flat rate of tax relief on pension contributions, the Chancellor of the Exchequer has attracted ire from all quarters, not least his own party. It appears that the trouble with ‘freedom’ is now being realised; it’s relatively easy to know what you’re freeing people from, a lot more difficult to know what you’re freeing them to.

One of the forthcoming changes that has perhaps garnered less attention is to that of the age at which individuals are eligible to draw a pension income. The current ages of 60 for women and 65 for men are due to be increased to 66 by 2020 and 67 by 2028; though these could potentially be brought forward to mitigate a disastrous social security bill. Recent research has suggested retirement ages as high as 77 for those looking to enjoy a level of retirement income equal to two-thirds of their pre-retirement income.1

As we often point out at Russell Investments’, time is the biggest determining factor when assessing an individual’s ability to achieve their financial goals. Whether it’s starting to save early or deferring the point at which you intend to realise the savings; as little as an extra year can have a seriously meaningful impact.

Take for instance the example of an individual at age 50. They have retirement savings of £100,000 and are adding an additional £5,000 each year. They plan to retire at age 65, not take a tax free lump sum and begin to draw an income of £30,000 each year, escalated with inflation. 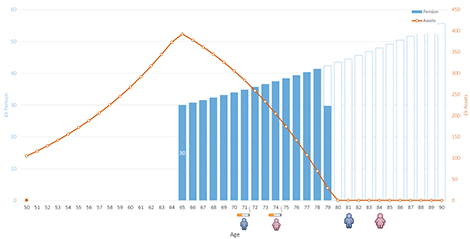 Now, whilst there is clearly an argument to be made that ‘average’ is a crucial choice of words; after all, you have a 50% chance of outliving that average and an equal chance of not making it to that average age, it is a risk best avoided. In this instance, without changing any other parameters, we can look at the difference deferring retirement by one year makes. 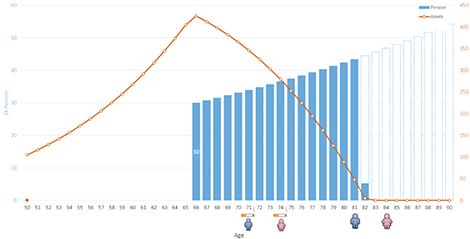 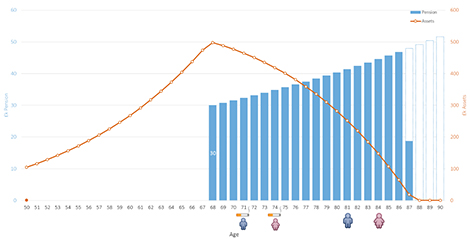 So the likelihood of many of us having to work for longer before retiring is perhaps not as bad as it sounds – with advances in modern medicine and improvements to individuals’ quality of life we’re all living longer and as a result need our assets to last longer too.

A 2010 survey found that 61% of Baby Boomers were more afraid of running out of money than they were of dying2, highlighting the importance of the conversation around longevity risk that advisers have with their clients. Realising that an investor perhaps doesn’t have enough money to last them for the rest of their life is much easier to deal with before they retire and infinitely more difficult to deal with when they are 15 years into retirement.

Russell Investments’ suite of funds and tools are designed to help facilitate these discussions and prepare investors for the journey ahead. By helping advisers to keep their clients informed and aware of how their circumstances can be affected in long-term planning, we are able to contribute to positive outcomes and support the financial advice process.