The counterargument: Why we believe giving up on Europe in favor of the U.S. is wrong

In a recent blog post by BlackRock’s Global Chief Investment Strategist Richard Turnill, he explains the decision to upgrade their view of U.S. stocks and shift down to neutral on European equities. While we admire the strategists at BlackRock and other industry pundits who share this view, we respectfully disagree.

The main argument Mr. Turnill brings to the table for the upgrade is higher U.S. earnings growth momentum, as evidenced by a sharp acceleration in analyst earnings upgrades. He reasons that this trend—underpinned by strong fundamentals coming from robust economic growth and fiscal stimulus—will fuel equity-market returns going forward. And since the U.S. is displaying the strongest acceleration and Europe the weakest, he upgrades the former and downgrades the latter.

Cause for celebration or cause for concern?

Now, it is undeniable that U.S. earnings growth has been strong and that equity analysts have revised up their expectations significantly. But in our opinion, this is more cause for concern than celebration. If we take a closer look at the chart of the week in the blog post—and we show Mr. Turnill’s smoothed earnings revision ratio and add the unsmoothed ratio, as well as more history—it becomes clear just how extreme this past upgrade cycle has been. In fact, in the second chart below, we can see that in the past two months, earnings expectations for 2018 have been revised up from 12% to 19.7% growth. To upgrade an equity region  after such a cycle, knowing that the hurdle for positive earnings surprises has just increased tremendously, runs counter to our beliefs. Especially since the revisions ratio does not have a great track record as a leading indicator of equity-market returns. 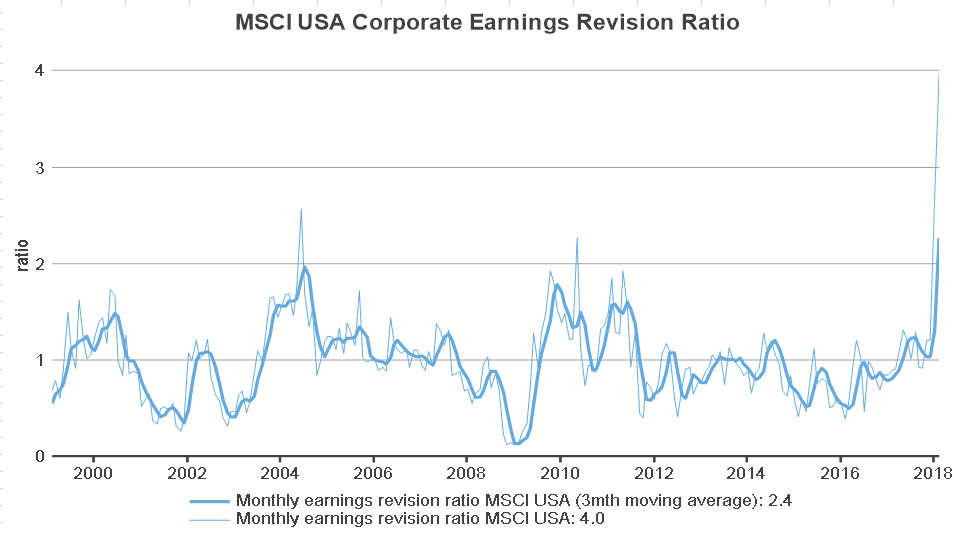 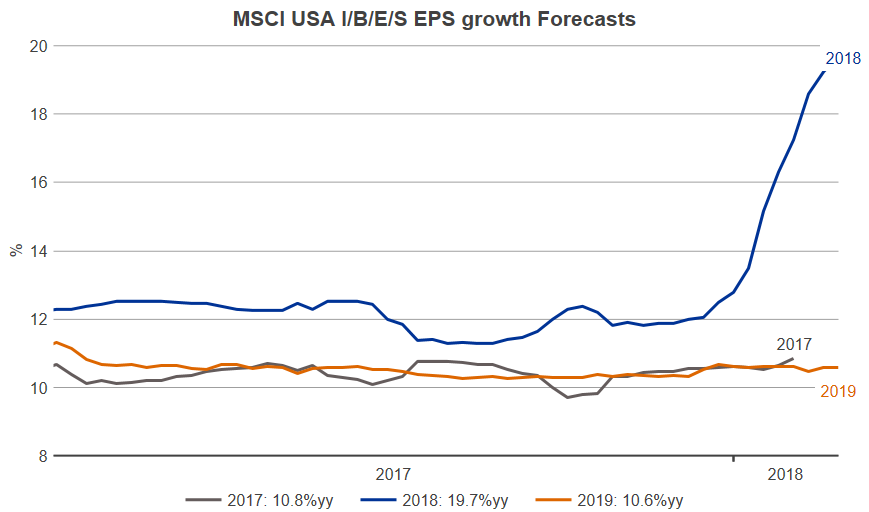 We also struggle with Mr. Turnill’s assessment of the fundamentals and valuation.  Although the total amount of U.S. fiscal stimulus is significant, it does not come without a cost. In a country without much spare capacity, an unfunded fiscal boost to economic growth will increase inflation, not to mention the budget deficit. This has already caused rates to move higher, with expectations closing in on three U.S. Federal Reserve (the Fed) rate hikes in 2018. Mr. Turnill mentions the risk this poses to valuation multiples, but fails to mention how much of the returns in U.S. equity markets over the past three years can be attributed to them.

In the chart below, we decompose the returns for U.S. equities into dividends, earnings growth and change in valuation. The chart clearly shows the majority of return has come from a change in valuation, which the recent sell-off did not really impact at all. As a result, we take the risk of higher inflation, interest rates and monetary policy uncertainty much more seriously. Especially because a significant part of the higher earnings call is really an implicit weak dollar call that could go in reverse if the Fed becomes more hawkish. 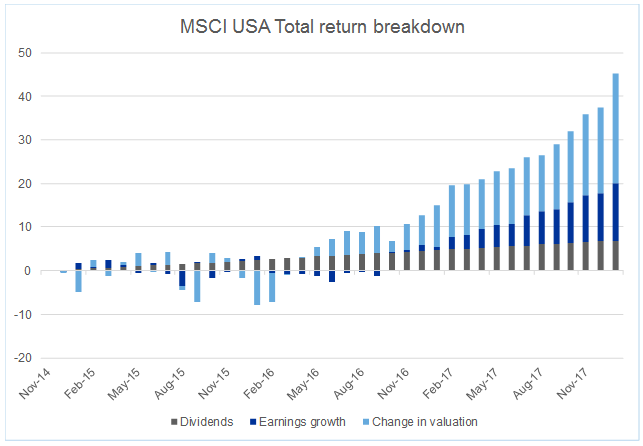 It doesn’t stop there. It wasn’t for nothing that the recent sell-off started with the news that U.S. wage growth had accelerated more than expected. If inflation picks up due to higher wage growth, the associated margin pressures will hit earnings expectations hard. At a time when record-high profit margins are priced by equity markets as if they will remain in place almost forever, there is a real risk of disappointment.

A closer look at Europe

Now contrast all this with Europe. Valuations are neutral and returns have been driven by dividends and earnings growth, as opposed to valuation changes (see second chart below). Monetary policy is expansionary and expected to stay that way for the foreseeable future. Economic growth is strong, and with plenty of spare capacity available, inflation risk is virtually nonexistent. Margins are expanding.  Europe may lack the sugar high of a large fiscal stimulus, but both in terms of return potential as well as risk, in our opinion it is superior.  Even its underperformance over the past year—driven in large part by the strong euro and a smaller weight in IT—is a positive, because of the better starting point it offers.

We recognize that difference in opinion is what makes a market, but to us, the choice is clear. 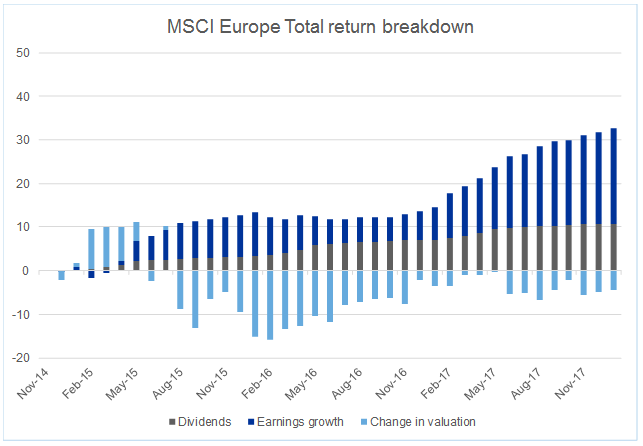