Deferred, Cancelled, and Suspended – a Look at Dividends in the Current Market Environment

The COVID-19 pandemic and response from governments to manage the health and safety of the global population has led to significant changes in daily life. Social distancing and isolation have become the new norm; homes have become offices, businesses have had to shut down temporarily if not permanently, and traffic has become almost non-existent. This has had significant impacts on economic growth globally and in Australia. 2020 will likely be one of the worst years on record for most, if not all, global developed economies, as the impacts of forced shutdowns halts economic output. Amid unprecedented levels of economic uncertainty, The Reserve Bank of Australia forecasts Australian GDP to contract by 6% in 2020, and June 2020 unemployment to be 10%.

What does that mean for company earnings and dividends?

Outside of select companies within the healthcare, technology, and materials sectors, the abrupt change in economic conditions has had a severe impact on the outlook for earnings over the next year. Business models have been stress tested like never before. Many companies have abandoned earnings guidance due to the extreme uncertainty around when some level of normal will return to business conditions and confidence. Capital raisings have been frequent (and in relatively large size, as they were during the GFC). Share prices have reacted swiftly to price in these developments, and yield stocks have been some of the worst performers through market volatility this year.

As the outlook for earnings has significantly deteriorated and companies conservatively manage balance sheets, the outlook for dividends has been materially impacted. Since the middle of February, over 30% of companies in the ASX200 have deferred, cancelled, suspended, or revised dividends.

The cuts to dividends have been a significant headwind for yield-focussed portfolios, and this is true for our yield-focussed ETF RDV. RDV has underperformed the broad market by approximately 7.5% since the start of the year as share prices of stocks with previously high yields adjust to reduced dividend expectations.

Australian banks have historically been key features of any yield portfolio due to steady franked dividends. Australian banks have also been amongst the worst hit through the COVID-19 market downturn, as economic activity slows and net interest margins shrink (as a result of lower interest rates); from the market high on Feb 21st to the bottom on Mar 23rd Australian banks fell an astonishing 44%, underperforming the ASX200 index by almost 10%.1 Whilst the market has rallied off the bottom through April and into May, banks are down 37% from the February market high. 2

Three of the big four banks acted quickly to conservatively manage their businesses through the coming months of uncertainty; ANZ suspended its interim dividend, NAB cut its interim dividend by 64% and announced a $3b capital raising, and WBC deferred its interim dividend decision without a set timeline for a decision. Notwithstanding this, as a result of the relative fall in price, banks now trade on a forward dividend yield of 4.3% vs ASX200 at 3.6%.3 Ex-CBA, the major banks are now trading on less than 1x book value, cheaper than the valuation in the depths of the GFC (CBA is now around its GFC trough book value multiple). Headwinds remain for the banks, however it would appear that this is now well and truly factored into the price. 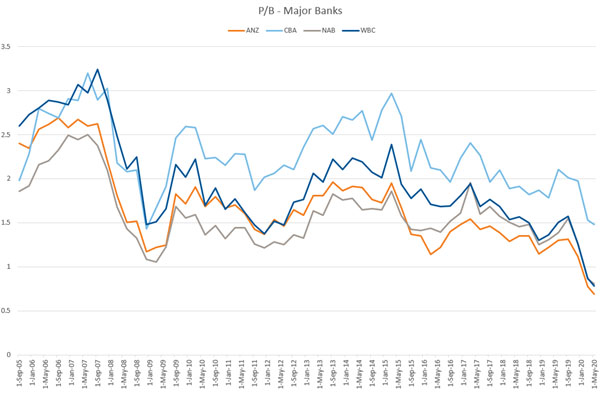 The carnage seen in markets through Q1, especially in yield stocks that cut or abandoned dividends has been unlike anything seen in markets since the Great Depression. There has also been an unprecedented response from governments and central banks via fiscal and monetary stimulus to limit the impact and length of economic slowdown. When the recovery begins is uncertain and dependent on numerous factors, but economies will recover from the COVID-19 impact; The Reserve Bank of Australia forecasts 2021 GDP growth at 6%. Company earnings will recover as we move through the next months and quarters, and dividends will eventually be reinstated. Investing for yield has had a very difficult 2020 caused by a once in a hundred-year event, but it too will recover.