FY20 will be remembered for lockdowns, Zoom meetings, and the fastest bear market in history driven by the global COVID-19 pandemic. For the 12 months to June 30 the ASX200 returned -7.68%; our yield-focussed Russell Investments High Dividend ETF (RDV) underperformed over the year and returned -15.83%1. This period includes a market selloff of almost 40% from late February to late March, followed by a partial recovery into the end of June. Whilst COVID-19 was the key driver of the market and RDV’s return for the year, below we look at two broader themes that were also noteworthy.

What happened to company fundamentals?

Reporting season for FY19 was the first insight into fundamentals for FY20, as throughout August companies reported results and provided outlooks for the coming year. Aggregate earnings for FY19 were reported below market expectations, and guidance for FY20 was downgraded. The downgrade in earnings expectations continued modestly through the beginning of 2020… and then there was a global pandemic. Earnings and dividend forecasts were slashed beginning in late March as uncertainty around the pandemic gripped global markets, and this had a material impact on RDV specifically due to its dividend yield focus. Downgrades began to slow in May and bottom in early June, and since then expectations for earnings and dividends have been upgraded modestly (albeit of a low base); after a difficult Q1, RDV outperformed the broader market through Q2 as the outlook for dividends improved. The upcoming reporting season in August for FY20 will be one of the most keenly watched since the GFC, as the market focuses on the post-pandemic recovery and impact on company fundamentals. This will also be an important reporting season for dividend stocks, as many companies withdrew dividend guidance altogether. 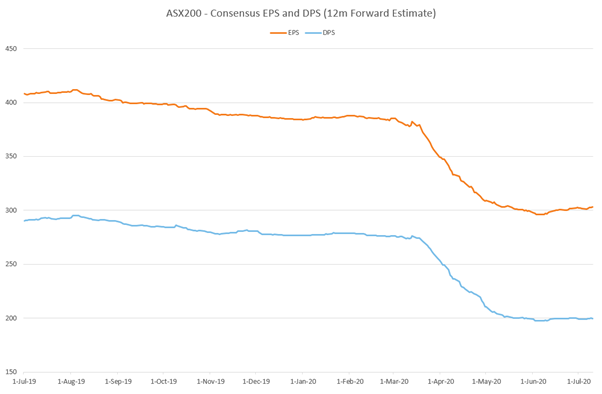 What were the factor drivers over the year?

The first half of the financial year was volatile for factors in Australia, though the magnitude of factor returns was relatively muted (at least relative to what was to come). Whilst reporting season was mostly stock specific in terms of drivers, some of the more defensive momentum stocks underperformed whilst growth and quality names outperformed. Towards the end of 2019 risk aversion in the market subsided as US/China trade relations improved; growth, quality, and value stocks fared relatively well compared to low volatility stocks in this environment.

The headline market returns through Q1 were notable on many levels, as we saw the fastest bear market in history. Under the bonnet we also saw extreme moves at the factor level. The significant underperformance of value was a major theme, and March was the worst month for the value factor since the GFC2. A combination of swiftly falling bond yields, economic shutdowns, and an oil price which more than halved in March was a triple whammy headwind for value stocks, which includes yield stocks; banks, REITs, and energy stocks underperformed significantly. This environment was a headwind for dividend yield strategies and RDV specifically, as the significant reduction in dividend expectations from higher dividend companies drove material underperformance in these names.

The market bottomed in late March, and through Q2 into the financial year end risk aversion diminished as investors began to focus on the economic recovery rather than uncertainty. Low volatility stocks were left behind as cyclicals came back into favour; growth, value and quality stocks outperformed, though factor performance remains volatile as economic reopening news flow continues to drive intra-market gyrations. The recovery in banks and REITs was a major market driver through the final quarter in the financial year, as both sectors recovered from oversold levels – RDV was a beneficiary of this and outperformed the broader market in the Q2 rally. 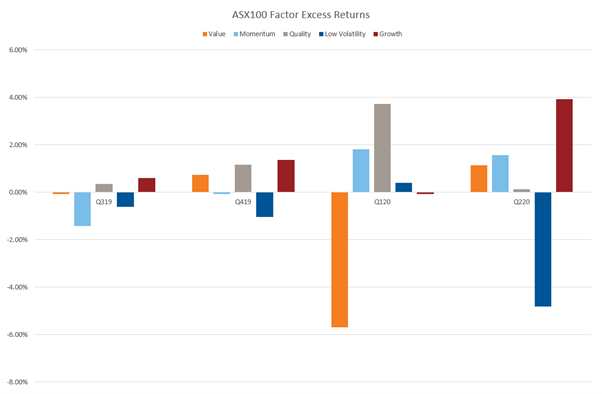 What were the stocks that added and detracted value over the year?

As mentioned above, financials were particularly weak over the financial year. Financials have been a traditional high dividend sector, especially banks. RDV has historically held an overweight to the sector for this reason, both in the major banks as well as the regional banks. RDV’s position in Bank of Queensland was a notable detractor within financials over FY20. A disappointing result in October, driven by challenging trading conditions, led to consensus downgrades in earnings and dividends; the stock fell 25% between its result and the end of 20191 , and was sold off further during Q1 alongside other financials as the global pandemic rocked markets.

Although it was a difficult year for dividend yield as a strategy, mostly driven by the effects of COVID, there were bright spots at the stock level for RDV. JB Hi-Fi is a notable example of a stock that added value relative to the broader market. The stock was added to RDV in March 2019 due to its history of growing dividends, as well as its relatively high expected yield. Through the last six months of 2019, the company outperformed the broader market, driven by positive trading updates and incremental upgrades to the dividend and earnings outlook. Notwithstanding this, the stock was not spared during the market carnage in Q1, falling almost 50% from peak to trough1. JB Hi-Fi has been one of the better performers in the COVID recovery rally however, as it is a key beneficiary of the ‘work from home’ theme and the increased demand for home technology and appliances. The stock rallied into the end of the financial year, buoyed by a strong trading update in early June. For the financial year (which included one of the most hostile market environments since the GFC) JB Hi-Fi stock returned 76% and was a positive contributor to RDV’s performance in an otherwise difficult environment. 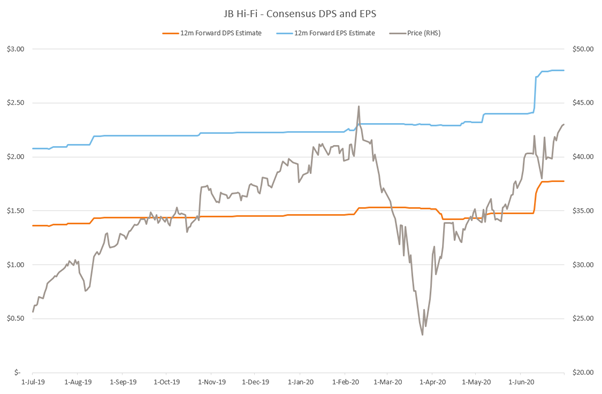