China after the National Party Congress: 3 challenges facing the country

As 2022 winds down, the Chinese economy remains in a tough spot, with the zero-COVID policy and the declining property market weighing on consumer sentiment and spending. Retail spending has slowed to 2.5% on a year-on-year basis through September, while property prices nationally fell by 2% in the month of September. Additionally, the Chinese Communist Party has just wrapped up the 20th National Party Congress—where President Xi Jinping secured a third term as president and unveiled the new leadership team (Standing Committee).

The COVID situation will likely remain a challenge in the very near term, given China is heading into winter and there’s been little indication of a change in policy coming from the recent Congress. There are several domestic mRNA vaccines that are currently on trial, and positive results there would be very encouraging. Additionally, further progress on the localized production and supply of the anti-viral Paxlovid treatment is also an important watchpoint.

Can China become a middle-income country by 2035?

This past July, we discussed China and the middle-income trap, noting that the country was looking more like one that had broken through the middle-income trap (e.g., South Korea) than one that had remained trapped (e.g., Brazil). Our rationale at the time was China’s focus on boosting domestic consumption and climbing the value-add chain of manufacturing. Furthermore, in his opening speech at the National Party Congress last month, President Xi reiterated China’s goal of becoming a middle-income country by 2035. However, we believe that recent developments have added some headwinds to this objective.

Challenge #1: Potential for less stimulus in the near-term

The first challenge is that, with the new line-up of the Standing Committee, it appears to us that there is less potential for support for the country’s embattled housing sector in the near term. Why? It may emerge that Li Qiang, who was the head of Shanghai previously, is going to become the new premier. In China, the premier is the official who is responsible for economic policy. Based on recent actions, we believe Li is less likely to advocate for more aggressive fiscal stimulus in the near term. Given the weak property market, elevated youth unemployment and depressed consumer confidence, some level of support is required for the economy to ensure that there isn’t any form of economic scarring within the household sector. Economists call this phenomenon the paradox of thrift, whereby elevated personal savings can be detrimental to economic growth.

The second challenge is the recent policy announcement from the administration of U.S. President Joe Biden addressing semiconductor chips. China has been embarking on a path of catching up in the more advanced semiconductor-chip arena. Indeed, this has been part of the focus of initiatives such as the Made in China 2025 policy program, which provided large subsidies to domestic manufacturers. While there had already been restrictions on the export of high-end chips to China, Biden’s recent announcement basically expanded the number of components that are restricted, and also banned U.S. nationals from working for Chinese chip companies.

Finally, we should touch on recent commentary about the potential for China to catch up to the U.S. in GDP (gross domestic product) terms. Larry Summers recently made some comments noting that the calls for China to surpass the U.S. are reminiscent of calls for Japan to do the same thing back in the 1980s.

It is important to note that this comparison is on a total GDP level, so even if we saw China catch up it would be at a much lower level of income per person. With this consideration, and the fact that long-term economic growth is largely a function of population growth and productivity, let’s turn our attention to China’s demographic challenges. China’s population is aging quickly, and the fertility rate in China has continued to fall below the replacement rate. The replacement rate refers to the fact that a population needs roughly 2.1 children born per woman to hold the population steady from one generation to the next. The chart below shows that China’s fertility rate is now as low as that of the United States. This dynamic puts a lot more pressure on productivity—which, as mentioned above, is facing some challenges. 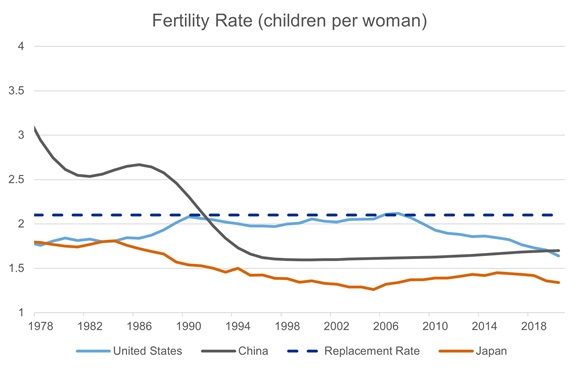 While there are challenges on the macro front, we do think there are opportunities within Chinese markets. The one encouraging aspect of the new political line-up is that the anticipated new premier, Li Qiang, has a history of being tech-savvy and open to foreign investment and innovation. For example, Li oversaw the creation of the STAR equity board (China’s equivalent of Nasdaq but focused on smaller companies) and also was pivotal in encouraging Tesla to undertake production on the mainland.

What was the market impact of the National Party Congress?

Following the conclusion of the National Party Congress, the Chinese market—as measured by the MSCI China Index—fell more than 8% in the first trading day on Oct. 24. However, these relative losses were mitigated by strong returns the following days when the market stabilized.

How are we responding in our portfolios?

At Russell Investments, we remain overweight the market overall and have not yet witnessed any panic selling by any of our sub-advisers. What we have seen is renewed scrutiny on portfolio holdings, with a focus on assessing any potential impacts from political developments. So far, we have seen a general reluctance to materially trade in a highly volatile market where prices can easily go either way driven by the slightest news flow.

Overall, the MSCI China Index is down roughly 60% since its peak on Feb. 16, 2021, in U.S. dollars. Despite the recent political developments, which have concerned markets, active investors are also seeing opportunities from the fear-driven reaction. We see valuations as generally attractive, and believe that skilled stock pickers are able to find good entry points in what they see as solid business franchises that are less sensitive to policy direction.

As always, we will continue to monitor these developments over the next few weeks, both at the macro and micro level.